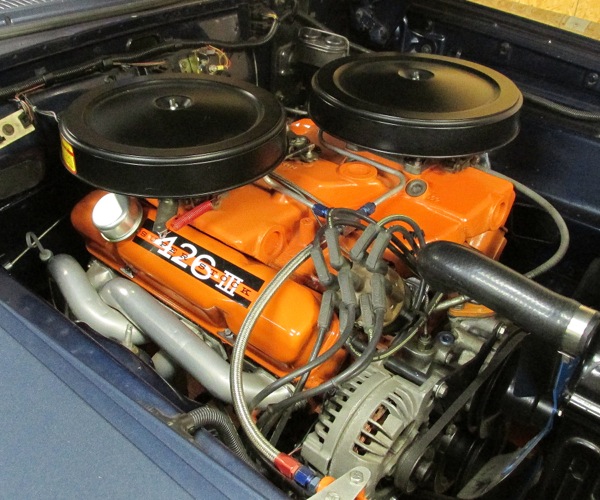 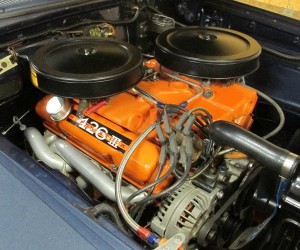 Ask any Mopar aficionado around the Midwest, “Who is the guy to go to if it has anything to do with a Hemi power plant?” And the answer which will probably be uttered is Tony DePillo and his Specialty Motorwerkes Company located in the Dayton, Ohio area.

He does it all, from a speed shop owner, a parts fabricator, an engine tuner, a racer, and for purposes of this article, an engine builder.

He covers all applications with the legendary power plant including stock, street and strip. And, unlike many engine builders in motorsports, Tony has been a driver himself wheeling a vintage 1964 Plymouth Savoy Super Stock car which is painted in the motif of the famous “Honkin’ Hemi.”

“I’m a longtime Hemi fan which really made Chrysler in the 1950s, 1960s and now with the 5.7L and 6.1L Hemi’s. I grew up in northeast Ohio when Mopar national drag racers Arlan Vanke and Carlon Hine were burning up the strips with Hemi power. I was fortunate enough to be able to work with Vanke and it had a huge influence on me,” the Ohio State electrical engineering grad explained.

Tony laughed when he recalled his first Mopar machine, a ‘66 Satellite. “It was really beat up, but I drove it hard and beat it up even more. At the end, it was burning more oil than gas.”

Tony got involved in Super Stock drag racing in the early 1970s with a modified ‘68 Dodge Coronet R/T and a ‘68 Dodge Charger 440 Six-Pack. Besides driving, Tony was also heavily involved in the tuning activities.

However, his involvement there would end after the 1985 NHRA Nationals, when Tony felt that the Mopar engines were not getting a fair break in the engine rules. 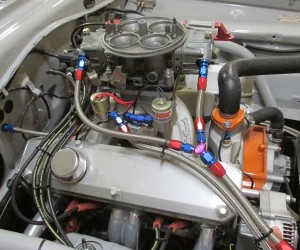 This DePillo street/strip engine was built off a 340 block and carries an Eagle four-inch crank, Eagle rods, Diamond Pistons, Comp cam, and a single 1050 Holley carb. The 416cid engine burns pump gas and without its nitrous system pounds out about 480 horses. This is one of six DePillo engines purchased by the Ortel family of Tipp City, Ohio.

In 1998, the National Street Car Association (NSCA) was formed, with Tony being an active member as well as the group’s president during it’s decade-long run.

The NSCA, a sanctioning body for heads-up, street legal racing that focused a lot on nostalgia vehicles, ended in 2007. However, even today, Tony can still be found behind the wheel of his nostalgic Honkin’ Hemi.

Setting Up Shop
During the years prior to forming the NSCA, Tony built up his Mopar reputation with the start of his business, Specialty Motorwerkes, in 1986 (specialtymotorwerkes.com).

The shop continues to build engines today. Besides the American muscle, his company also does work on many high-brow import machines.

But these days, you will find the boss in an area at the back of the shop that deals with engines that have spark plugs coming through the valve covers.

Tony will tell you that the Hemi building activities are based on the customer’s desires but that he will make suggestions if he feels the build-up is unrealistic. Tony explained, “There are a lot of guys looking for more power under the hood, but with retaining the stock look of the engine. 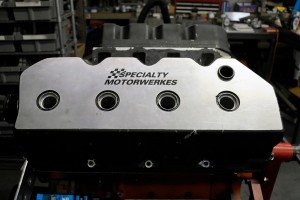 Carrying that company name on your Hemi powerplant assures that you are getting top performance.

Of course, the vintage Mopar muscle cars are a good recipient of that type of treatment.

The type of work we would do there would be improved pistons and rods which help in increasing the compression ratios.

“The oiling system is often the weak link in this build-up and we might use a higher capacity oil pan and a higher volume oil pump. With the Nostalgic Super Stock cars, just about anything goes.”

And would you believe that there are sometimes as much as three years between Super Stock engine servicing.

Tony added that on occasion, he will build a complete turn-key nostalgic drag car for the customer. Earlier he did such a job, twice, with the building of a pair of clone A990 Mopar drag cars each carrying 478cid Hemis. 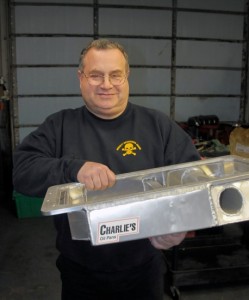 At the present time, there is a main emphasis on the building of Nostalgic Super Stock engines, but he’s not adverse to working on the upgrade of a pure street legal Mopar, or one that can be adaptable for either street or strip. With those types of upgrades, Tony likes to maintain the external factory look of the engine.

On occasion, there is also some dabbling with the early generation Hemi’s.

“I have done engines with 354 Hemi heads for street rods. And also, there have also been several 392 Hemis that I 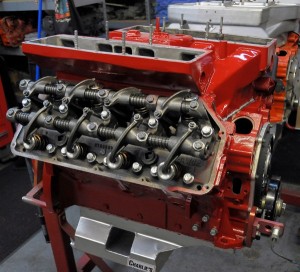 This Nostalgic Super Stock engine was built by DePillo in 2009. The dual-carbed engine was bored and stroked to 478cid and it pumps out 750 horses.

To generate maximum power with his top-gun engines, Tony has collaborated on a number of custom pieces to become a part of his performance package.

“One such piece is my custom oil pan which is not nearly as tall, or volume-wise as large, as the present oil pans. It also enables me to mount the engine lower which drops the center of gravity of the car,” he said.

There are also DePillo-designed intake manifolds, which are fabricated by Hogan. In addition, CP Pistons has worked with Tony in creating Hemi-only billet pistons, which are legal for NHRA Super Stock cars. They are very light at only 570 grams each. Finally, he’s also worked with Glenn Stires in the design and development of lifters and cams.

In more recent years, Tony has been involved with the new 5.7L and 6.1L Hemi engines. “I think these engines are excellent, actually fixing some of the problems of the original.

The engines have stronger pushrods and rocker arms. They are very durable and are easily capable of running 250,000 miles. They still have some of the old-school characteristics.

“Upgrading these engines is pretty straight-forward with mostly just add-on pieces. But it is very compatible to the Pro-Charger blower and will kick up the power by 150-175 horses,” he indicated.

With such awesome demonstrated capabilities, it seems like a logical question to ask of this big-time Hemi builder, 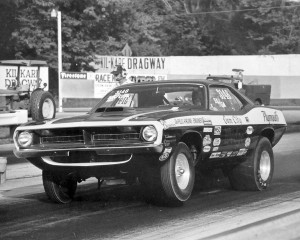 what is the simplest way to pump up a Hemi. Tony quickly responded,

“Hey, that’s an easy question for me. What I do is increase both the compression ratio and the air flow. You know, this engine is nothing more than a big air pump and I want to give it all the air flow it can handle.”

Mopar Muscle is the Name of the Game