At that time, the three never dreamed that it would become an annual event drawing cars from across the country and showcasing in retrospect the ideas that sprung from auto racing to advance auto engine technology.

It is one step short of amazing to visit Milwaukee for the meet and peek under the hoods of racing cars that competed from about 1912 into the middle 1960s.

The pits at the State Fair’s famous Milwaukee Mile are filled with the hottest cars of their eras with their hoods open and men gawking at early race engine configurations ranging from a tiny Studebaker Champ six to a Duesenberg eight.

Double overhead cam ­engines made in the Teens generate surprise, as do the ­beautiful Miller eights that displaced only 91 cu. in. and put out 250 hp!

A Miller-powered racer could do over 170 mph.

After his death, David Uihlein’s Miller 110 engine sold at auction for $72,500 and his 1931 Miller Bowes Seal Fast Indy 500 winner brought $2 million at auction in Monterey, CA.

He had a passionate love of the early history of American motor sports and collected and restored many important racing cars.

They ranged from his Indy 500 winner to a sports car special bearing his name. He was the founder of the Harry A. Miller Club (www.harrymillerclub.com) that honors the famous engines and racing cars made by Miller in Indianapolis.

The 2014 gathering on July 11-12 was the 20th edition Millers at Milwaukee meet. It brought 53 historic racing cars to the Midwest and in the paddock area, the focus was definitely on what ticked under the hoods of each entry. For most of the afternoon, if a car was in the pits, it had its bonnet open either for a little wrench turning or to show off the powerplant that made it tick.

Equally fascinating was the array of speed equipment from a span of over half a century. There were carburetors crafted by hot rod pioneer Ed Winfield, finned and polished Studebaker Six cylinder heads, all manners of superchargers, ancient free-flowing exhaust systems, a 1913 Peugeot with a 3-liter double overhead cam four with four valves per cylinder, finned side covers, ancient magnetos, dual single carb intakes and high-performance hardware that most people only get to see in boneyards or dusty museums. 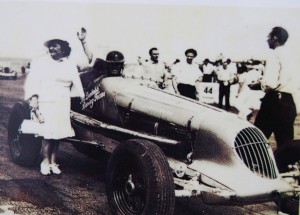 “This is a milestone event for our group and it brings out the best racing cars from all over the country,” said Dana Mecum, the Wisconsin-based classic car auctioneer who now serves as president of the Harry A. Miller Club that Uihlein started. “There are only 60 entry spots,” Mecum pointed out. “So it is important to get applications in early.” He said that Miller Meet participants get more track time than drivers get at similar events.

In addition to track time, the meet featured a vending area.