The folks at Dougans Racing Engines won a lot in 2015. A banner year, according to Ray Field, owner of Dougans. It was this success coupled with the shop’s rich history that helped Dougans’ nomination get selected as the 2015 Performance Engine Builder of the Year, sponsored by Speed-Pro POWERFORGED Pistons and Engine Builder magazine.

The folks at Dougans Racing Engines won a lot in 2015. Between the Best in The Desert series and the SCORE Racing series, both of which are trophy truck racing, Dougans won three races in each series and had podium finishes at every single race. “It was a banner year,” says Ray Field, owner of Dougans Racing Engines in Riverside, CA. It was this success coupled with the shop’s rich history that helped Dougans’ nomination get selected as the 2015 Performance Engine Builder of the Year, sponsored by Speed-Pro POWERFORGED Pistons and Engine Builder magazine. 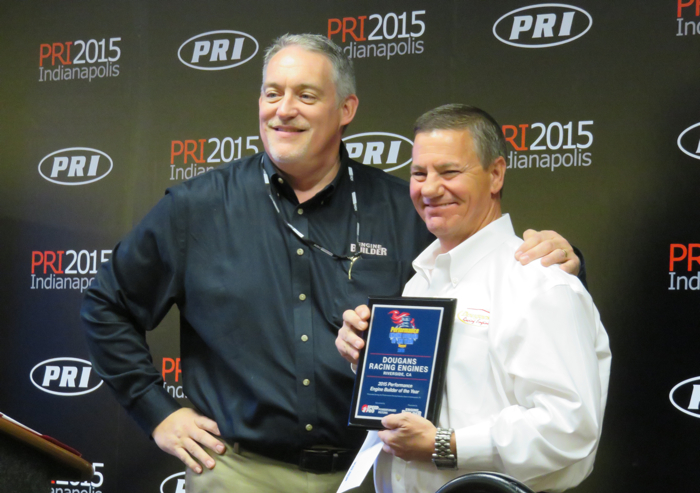 “To me, being recognized for all the hard work that everyone at our shop has done over the years, frankly, is not only appreciated, I never thought we would be considered in this conversation,” Field says. “It shows a commitment by the entire network of people who work at our shop, and we have to thank all of the people who have helped us through the years and supported us. It means a lot to us.”

The award meant a lot to everyone at Dougans Racing Engines, and the team enjoyed a weekend in an unseasonably warm Indy.

“It was wonderful the way you folks at Engine Builder and Speed-Pro treated us,” he says. “It was one of the most wonderful weekends I’ve ever had.” 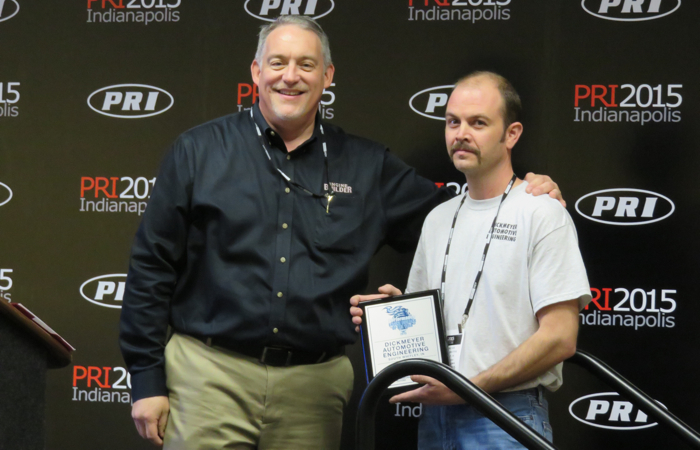 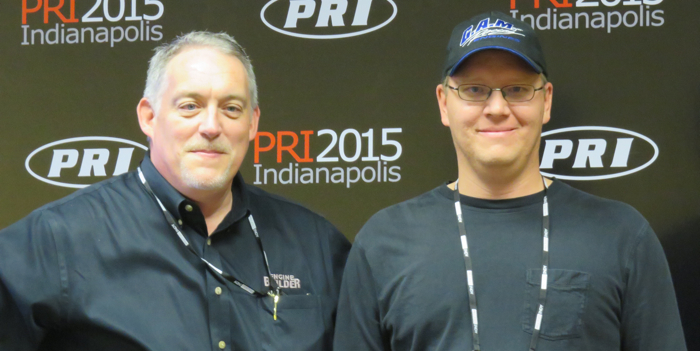 While Field and some of his team got to escape from their otherwise busy schedules that weekend in December, winning the award is certainly not going to their heads.

“Frankly, this will change nothing,” Field says. “To get to where we are you have to push and push and push. You cannot ever sit still. You cannot assume that the product you’re putting out is good enough. You have to push to become a better company, better people, better products, and better track support or someone will pass you up. The award was certainly a feather in our cap, and it feels great to be recognized, but the focus has not and will not change, because I believe that’s what’s gotten us here.”

The history of Dougans starts with Terry Dougan founding the business in 1980. Ray started with the company that same year as a 16-year-old teardown and cleanup kid, sweeping floors and scraping gaskets.

“I was heavily involved in auto shop as a freshman and sophomore in high school, and at that point I started at Dougans on a work program through school,” Field says. “Over the next three decades I have been with Dougans.” 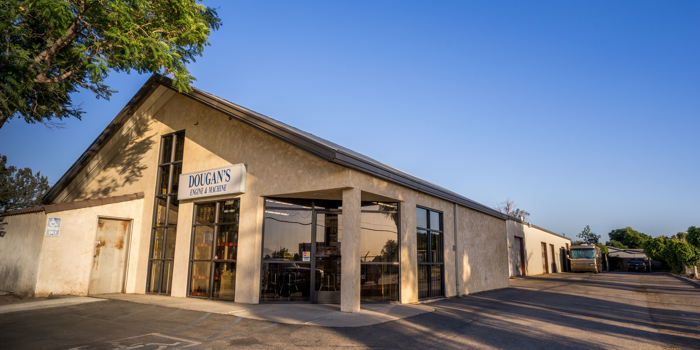 In 1998 Terry Dougan passed away from cancer. His wife Donna and daughter Tara Dougan asked Ray to manage the business for them.

“It was truly my calling,” he says. “At that time we were involved in many different styles of racing, stock cars, drag boats, drag cars, also lots of street cars and street rods.”

In April 2003, Ray and his wife bought the business from the Dougan family. It wasn’t until 2005 that the shop built its first Trophy Truck engine.

“Since that time we have grown our presence in off-road tremendously,” he says. “Today, between the SCORE series and the Best in The Desert series, we build, maintain and track support as many as 30 to 40 Trophy Truck teams.”

Dougans’ presence at the racetrack, or course, is how the does business besides its work in the shop.

“In my opinion you have to satisfy one customer at a time,” Field says. “You have to meet each customers’ needs one at a time. Word of mouth is everything.”

It’s not too surprising that Dougans only focuses on Trophy Truck engines these days. The shop is successful at it, and these engines are extremely demanding.

“These are very expensive engines that require a lot of detail,” he says. “We provide a complete engine package – the engine, electronics, dyno testing, chassis dyno testing, track testing, support, and racetrack support. You have to do as complete of a job as you can. We feel like this is one of the toughest engines to build in the world. It was always a level of engine building that we wanted to master and excel in.”

Unlike any other form of racing, Field says the closest thing to Trophy Truck racing would be the 24 Hours of Daytona or Sebring or something along those lines. 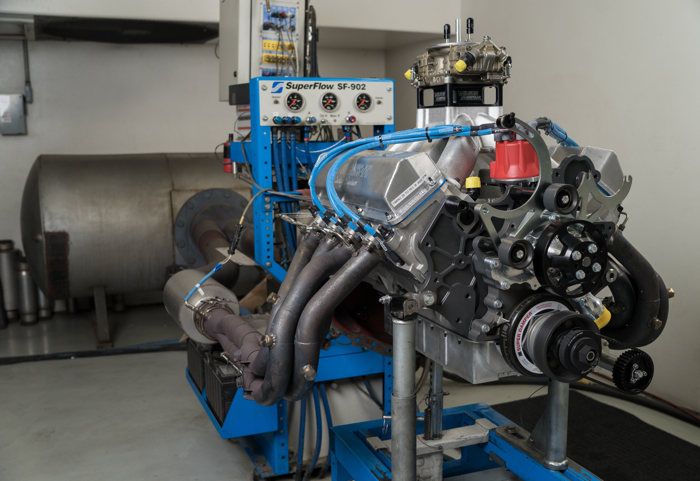 “And frankly, those cars weigh 3,000 lbs. or less and they do not have tires that come on and off the ground with impact that loads and unloads the engines in a very, very distinct manner,” Field says. “So the off-road stuff has to be stronger and more resilient, in my opinion, than any other form of racing. That is what turns me on about it. It’s the small details that make the difference.”

Anybody can buy the same parts that Dougans uses in these engines, but we can’t all be race-winning engine builders by only doing that much.

“What has to happen is we take those parts and quality control check them, modify them, finish machine them and go through a very stringent process of QC, which allows us to control the quality of the parts in our engines,” he says. “That is the key. You cannot assume any parts or any part of an engine build is correct unless you check it or do it.”

Despite all the different disciplines of engine building Ray has been involved in, today, Trophy Truck engines and racing are his passion. Not only is it due to the engines but also the people he spends 20-25 weekends a year with.

“It’s the relationships that you build, the camaraderie that you build and being in the thick of it makes us better at what we do and keeps us continually learning,” he says.

Speaking of learning, Field wants to make 2016 as successful or more so than 2015. His plan is to improve on existing products and is in the process of building two new engine combinations that will be released sometime in 2016 for trophy trucks. 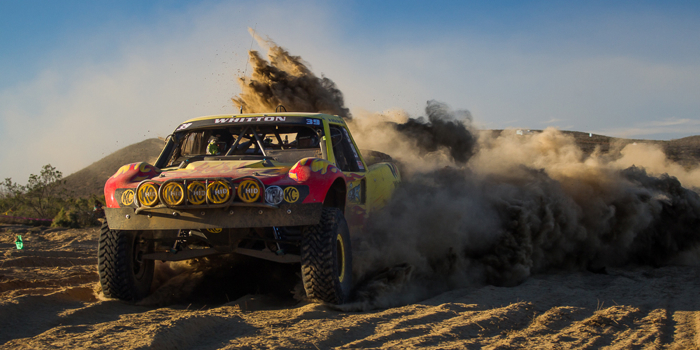 “Our main focus is to provide the same quality and products or better than we did last year,” he says. “Already this year we raced in the Parker 425 on February 5. In trophy truck and overall, we got first, second, third and fourth. We won trophy truck and class one and had seven trucks in the top 10.”

Dougans usually has somewhere between 10 and 20 trophy trucks at a race with its engines.

“In one series a truck travels 2,000 miles,” Field says. “If you have 10 trucks, you’ve gone 20,000 miles. And with 20 trucks, you’ve gone 40,000 miles. It’s not uncommon for us to put on 60,000 race miles a year, which means you learn stuff whether it’s right or wrong. That’s a fortunate position we’re in is that we learn things faster and continue development faster.

“You just work hard, work hard and work hard, and things will progress. The diversity of what we’ve learned over the years has allowed us to become better at what we do today.”

A Hell of a Good Year