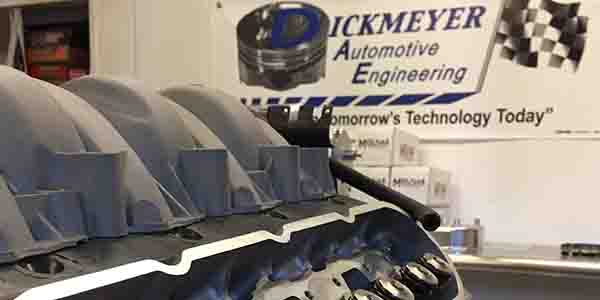 Whatever Matt Dickmeyer is doing as the owner of Dickmeyer Automotive Engineering in South Whitley, IN, it’s been working. Matt was recently named the 2017 Race Engine Builder of the Year by Engine Builder magazine and contest sponsor Federal-Mogul Motorparts’ Fel-Pro Performance Gaskets and Speed-Pro brands.

Matt Dickmeyer remembers when he was a kid his dad had a Galaxy LTD. The wipers had gone bad on the car and his dad put Rain-X on the windshield. It was wintertime and great big snowflakes, the size of cotton balls, were falling.

Whatever Matt Dickmeyer is doing as the owner of Dickmeyer Automotive Engineering in South Whitley, IN, it’s been working. Matt was recently named the 2017 Race Engine Builder of the Year by Engine Builder magazine and contest sponsor Federal-Mogul Motorparts’ Fel-Pro Performance Gaskets and Speed-Pro brands. For Dickmeyer, it’s an appropriate accomplishment – he was contest runner-up in both 2013 and 2015. 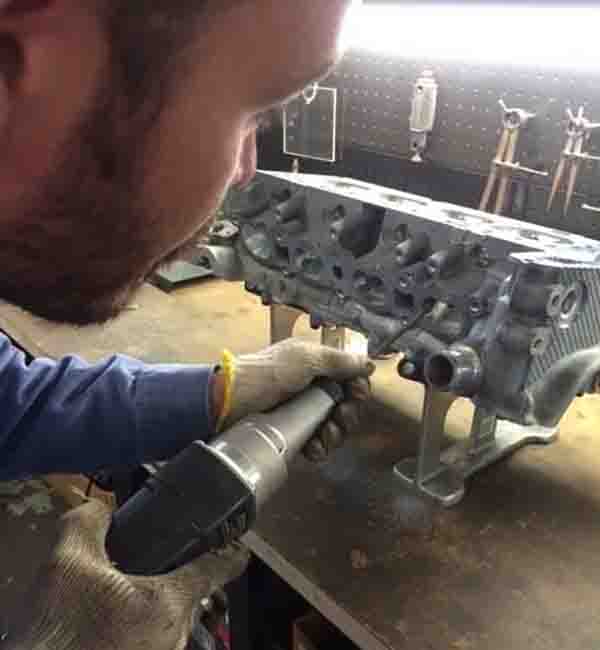 Matt is seen here doing some cylinder head work. He is well-versed in solving GDI issues.

“I started out just like many other guys in this industry did – I grew up on a farm watchin my dad. He was a diesel mechanic in the Navy and an engine builder,” he says. “I literally grew up around engines – it was as natural as doing chores.”

At a young age, Matt started building engines and experimenting with porting heads and developing theories of his own.

“A single-cylinder Tecumseh engine was the first engine I ever tore apart,” Dickmeyer recalls. “The first V8 I ever did was a 260 small block Ford out of a ’63 Fairlane. Every cent I made from every engine I’ve built I didn’t even really get to use because I just recycled it into buying another piece of equipment. It’s kind of the basis of how I got where I am. I’ve always had to do more with less.” 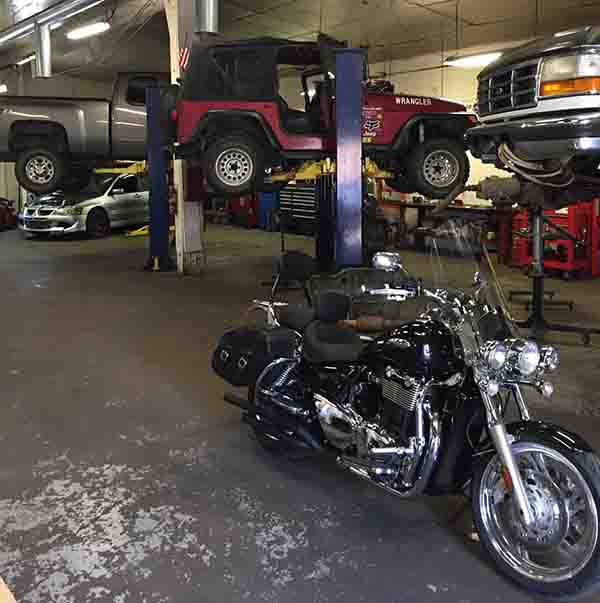 Dickmeyer Automotive Engineering will accept all types of engine work.

He opened his first shop, Modular Performance, in 1995, but had to sell it off following a divorce. That’s when he moved over to South Whitley, IN and started Dickmeyer Automotive Engineering in 2002. Matt runs the shop along with his wife Jen.

“Since then I’ve widened out my engine expertise,” he says. “If you’re into it, I’m into it, and I like a challenge. I’m one of those types of guys who if I decide to do something and I jump in with both feet I’m so focused on what I’m doing that anybody else doing something similar ought to just hang it up. That determination has made me who I am.”

Matt’s pet project for the past several years – when he hasn’t been busy building performance engines, motorcycle engines, renovating the shop, and receiving engine building accolades – has been developing an innovative dyno design, which is now patent pending. He is also looking to get into Bonneville engines in the near future. 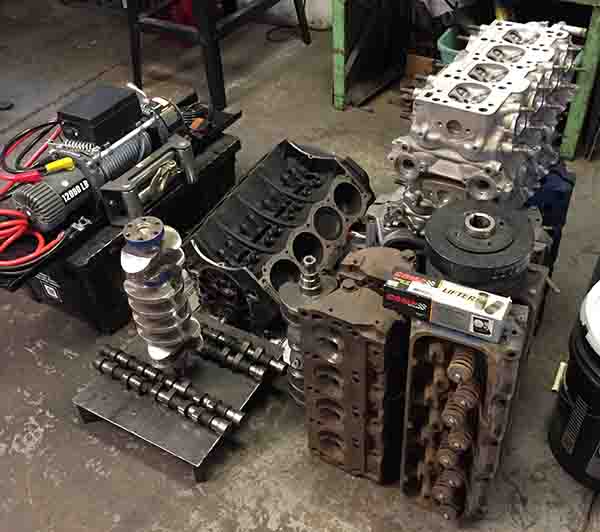 “I’ve always had a passionate feeling about the Bonneville Salt Flats and El Mirage in Southern California,” he says. “I’m actually talking with a few customers on a few really neat land speed record engines and I want to get back into doing that. I’ve done three or four engines for customers who have run at Bonneville and it’s always been intriguing to me.

“We’re also going to do an engine for a guy who’s going to Pike’s Peak. I think you can better yourself when you’re doing a wide range of engines instead of doing just one type of racing engine all day long. What you can learn from doing this format of racing is something you can apply to other things.” 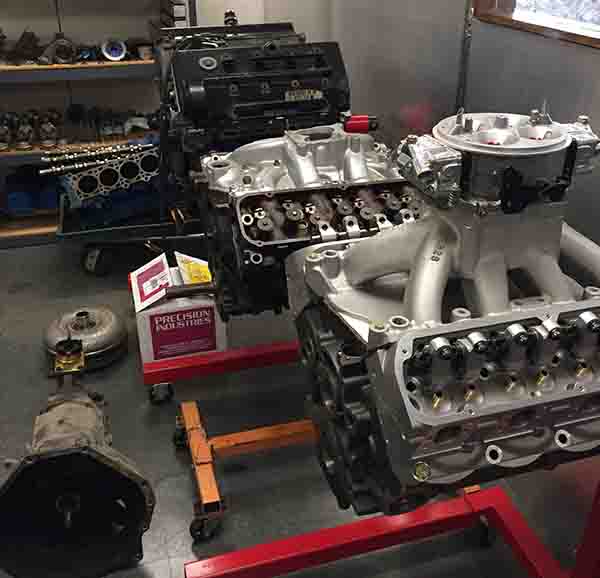 Over the years as his shop has grown, Dickmeyer has stressed the fact that he doesn’t want to get backed into a corner by being known for only one type of engine, or for just being a good engine builder. Matt enjoys working on other aspects of putting a car together as well.

“A lot of the customers that I deal with let me be free to do whatever I want,” he says. “Customers will tell me, ‘This is what I want to do,’ and then they’ll allow me to get them there in whatever means I feel fit. Being able to try this or be imaginative about that has been nice.”

Dickmeyer does own an engine shop, but he doesn’t do just engines. He builds chassis and roll cages. and also does transmissions and rear ends. 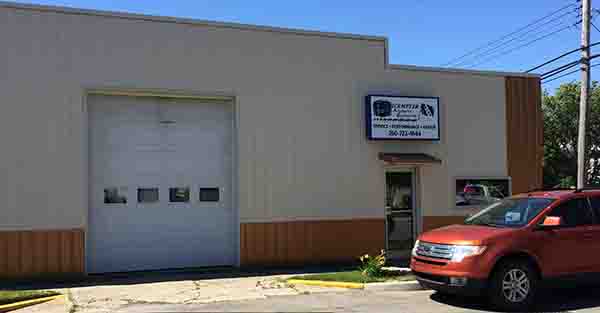 “If you can build chassis, rear ends and transmissions, you can take all that experience and know what you can and can’t do with an engine,” he says. “If you know how a car is going to respond to a certain type of torque or certain power curve it gives you more input on making a better engine. I like to take everything and apply it to what I do – it just makes me a more experienced, all-around fabricator, welder and engine builder.”

While Matt has earned many accolades over the years, the honor of being named an Engine Builder of the Year has escaped him – until now. 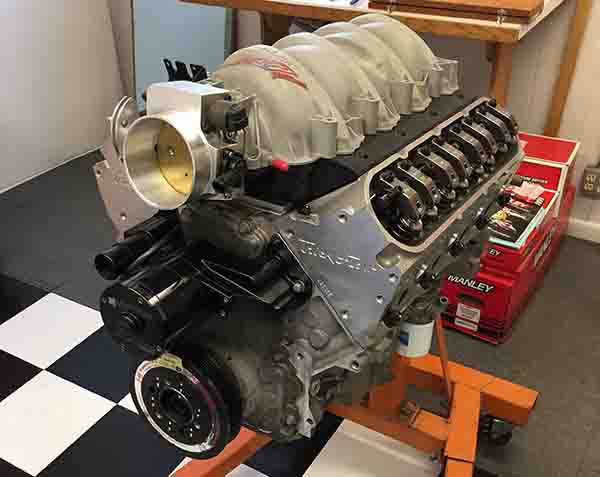 Dickmeyer Automotive Engineering’s engine room is always filled with engines and parts for on-going customer jobs. Above is a 383 LS1 engine for a Mazda RX7 capable of 1,300-1,500 hp. The Mazda RX7 will be used for LS Fest-type events and will need to be strong at multiple styles of racing. “This car will do it all and can run 8.50s in the quarter mile,” Matt says.

“Being named an Engine Builder of the Year means a lot,” Dickmeyer says. “Sometimes when you own your own business there are times when it feels like you’re working for nothing. Some people aren’t appreciative of what you do and sometimes you just need to hear a thanks or a good job. I’ve been in this business for over 25 years now and for the last couple of years it feels like things are finally falling into place. It feels good to know everything we’ve worked for hasn’t gone unnoticed.

The Diesel and Vintage Engine Builders of the Year as well as runners up in all three categories will be announced soon, and profiled in upcoming issues of Engine Builder. For more information about the contest, visit www.topenginebuilders.com.