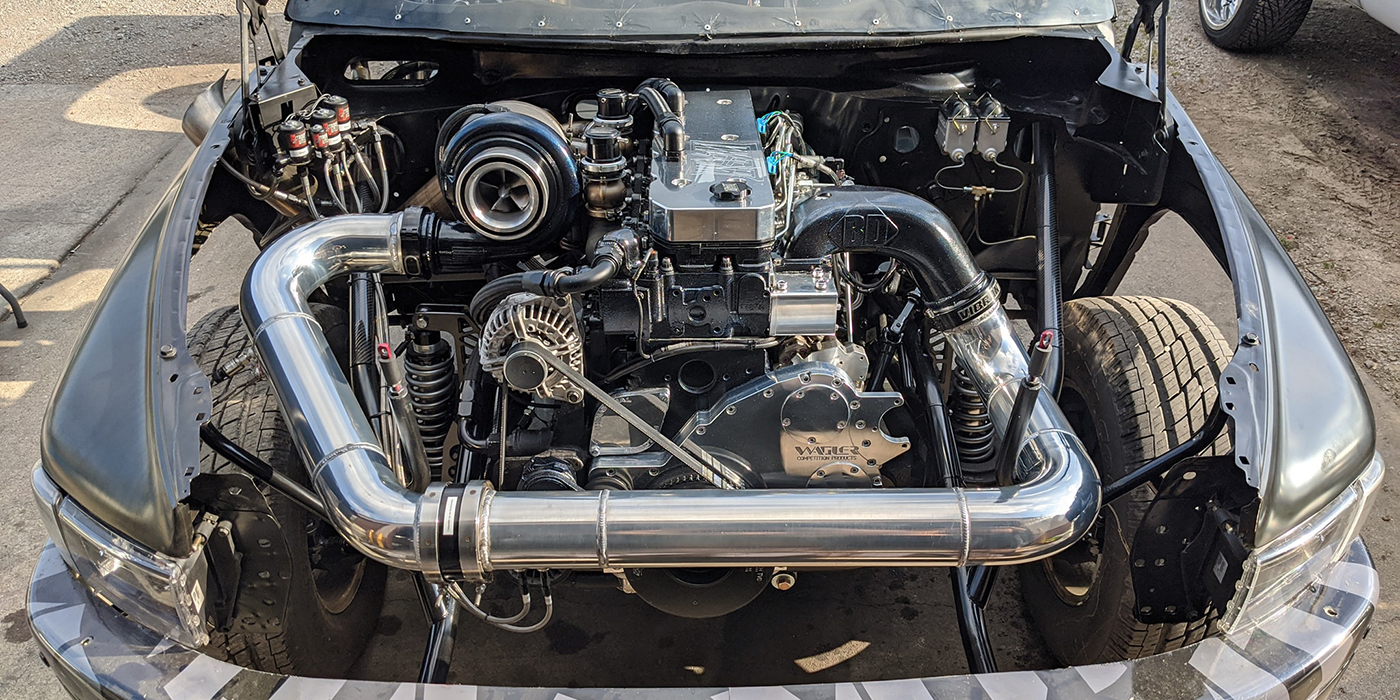 From working alongside Ryan Milliken to attending diesel technology school, working at Firepunk Diesel and HP Tuners to starting two different shops on his own, Paul Cato’s devotion to diesel is clear. Just check out this turbocharged 6.4L Cummins build inside Maverick Diesel’s ’94 Ram 2500 race truck.

Over the course of 11 years, Paul Cato has done a lot within the performance diesel industry. From working alongside Ryan Milliken and attending diesel technology school to working at Firepunk Diesel and HP Tuners to starting two different shops on his own, Paul’s devotion to diesel is clear.

For the past four years, Paul has been spending his time as owner of Maverick Diesel, running the shop, which offers custom tuning, performance parts and upgrades, fabrication work and engine assembly located in Royalton, IL. But his long road in diesel first ignited with a 2005 Sierra and an LLY Duramax.

“I’ve been in the industry 11 years now,” Cato says. “I started off by buying a 2005 Sierra and it had an LLY in it. I thought it was the coolest thing in the world. I ended up trading the truck in for my red truck, which everybody knows as the firetruck. I swore I was never going to modify it, and two weeks later I had an exhaust and a tune and everything else.

“Then, a month later, I convinced my wife that I needed to do a trans build or it was just going to leave me on the side of the road. That turned into a 48 swap from a 68. At the time, that was not common. Ryan Milliken was actually the one who talked me into doing it. In the process of doing that, I also bought an S366 turbo, 45% over injectors and head studs. What originally started off as a trans swap turned into 700 horsepower and it went from there.”

“Around that same time, I started diesel technology school at Southeastern Illinois College,” Cato says. “I did almost two years of a two and a half year program when I decided that I could not keep spending money on school when I needed to be making money, because my wife and I had two kids. I thought, well, I’m pretty good at the performance stuff, I’ll just start a shop.

“That lasted two years, and there was a lot of learning. When I closed that, I had already been at Diesel Power Challenge 2013 and got second place there and met the guys at Firepunk. That turned into a relationship and I ended up with a job as their sales manager for two and a half years. I also helped with their Pro Street truck.

“After two and a half years, I decided I was ready to move back home to Illinois. That’s when I started Maverick Diesel. About three months into starting that business, I got a job offer from HP Tuners to work as their Midwest regional sales manager. I did that for two years while running Maverick Diesel, and Maverick Diesel was growing fairly quick. Eventually, I couldn’t manage both, so I quit HP Tuners. It’s now been a year that I’ve been doing Maverick Diesel by itself. In that time, I hired Donavan and Grant who work for us in the shop.”

Founded in 2016, Maverick Diesel just recently moved its shop from a 3,500 sq.-ft. space into a nearly 6,000 sq.-ft. space, which has allowed the diesel shop the room it needs to grow and operate more smoothly.

“This new building is twice the size of what we had before,” he says. “We have the space for a dyno bay, a dedicated engine room, a dedicated trans room, a tear down room, a shop area, and dedicated fab area. We’re not just working in one open space where we’re just clustered and trying not to walk over each other. Now we’re able to actually work on expanding and not just managing what we have.”

Maverick Diesel is applying everything Paul has learned from his experiences in the industry as best they can to allow the shop to blossom, and it seems to be going well. Case in point, the shop’s own race truck – a ’94 Ram 2500 with a 6.7L Cummins – shows off all of the shop’s capabilities and has garnered some serious attention around the industry.

At a competition not too long ago, Maverick Diesel actually blew the back of the block through the firewall, which is the reason for the engine’s latest rebuild.

“This last go around, we built the engine ourselves and we seem to be having pretty decent luck with it so far,” he says. “Wagler did a lot of the machine work for us. We built the transmission using SunCoast parts. We assembled everything minus the short block ourselves. We also built the entire chassis on the race truck and we mounted all the panels, built the cage, wired the truck, and basically, we did everything.

“It’s got Wagler rods, a Wagler deck plate and a Wagler girdle. It’s got 9/16ths main studs and 9/16ths head studs on a Wagler head. The pistons are actually Freedom Racing Engines’ spec’d Diamond pistons. Valvetrain-wise, it’s got Wagler push rods, but other than that, it’s using the Hamilton valve springs that were in the cylinder head.

“We’re using a Hamilton cam in it. For the fuel system, it’s got 500% over Exergy injectors. It has two pumps – one stock, 6.7L pump and one 14mm pump from Exergy, which is on a Wagler dual-pump cover.

“For the turbo, it’s got a Garrett GTX 5533R, which has an 88mm compressor wheel, and then it’s got a Steed Speed exhaust manifold. It’s got two Turbosmart 45mm high pressure wastegates and a lot of nitrous on it. We have a total of five nitrous solenoids, and then we have one nitrous solenoid that’s used for water injection. We have water injection on the truck to keep EPGs down because we don’t run an air cooler.

Advertisement
In this article:AMSOIL, Cummins, diesel, Diesel engines, Diesel of the Week, Dodge