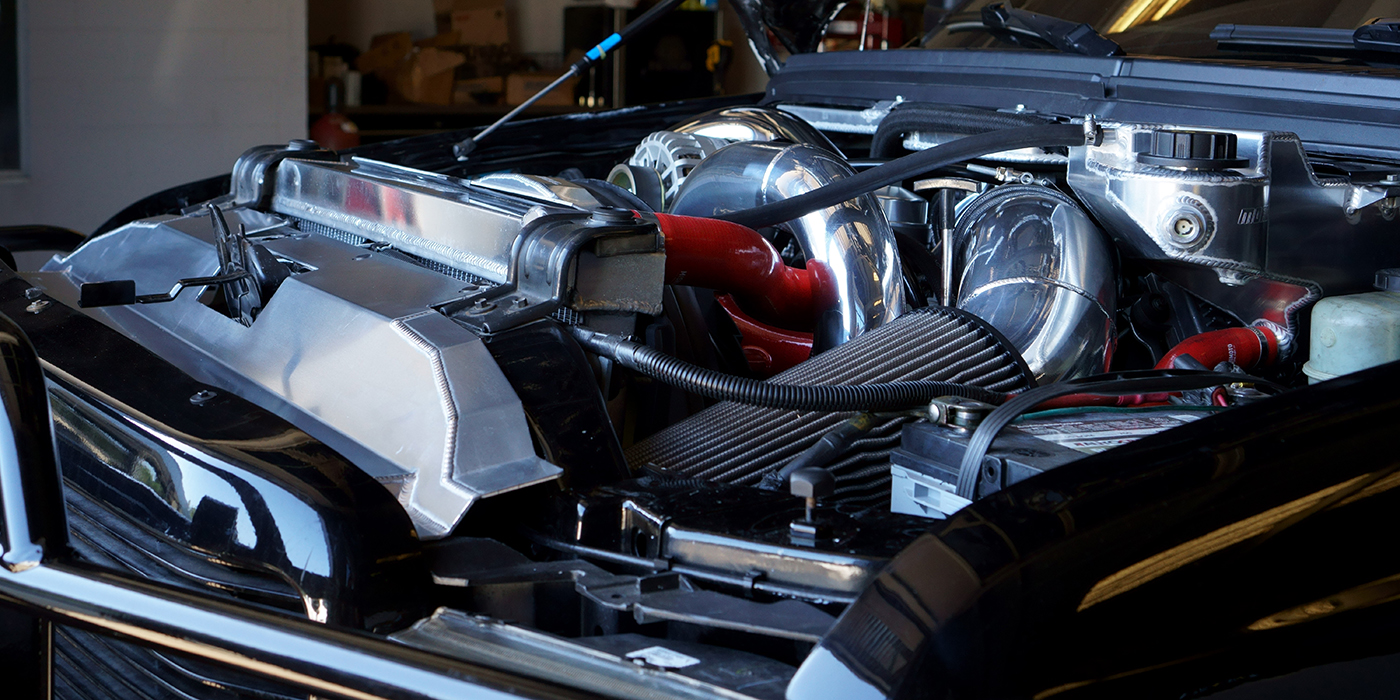 With time and money not an issue, Lead Foot Diesel Performance got to showcase everything they’re capable of on this Ford King Ranch dually build with a turbocharged 6.0L Powerstroke under the hood. See what went into this $150,000+ project.

When it comes to diesel trucks, you typically find one of two things – a build that looks great on the outside, but doesn’t run well; or you get something that runs well, but doesn’t look great on the outside. You rarely see a build that offers up both. However, the guys at Lead Foot Diesel Performance in Monroe, GA, recently finished up a build on a 2003 Ford King Ranch dually that, according to Lead Foot Diesel Performance’s sales manager Vinny Himes, got all the bells and whistles.

“We’ve got a pretty wild build wrapping up that’s a full-blown show truck, but also high performance at the same time,” Himes says. “It’s a 6.0L Powerstroke that’s had a complete transformation and there’s not one inch of this truck that hasn’t been touched.”

Vinny Himes found himself immersed in the diesel industry at a young age out of necessity. He grew up in Montana working on cattle ranches and they naturally drove diesel trucks. When they broke down, the area had no major diesel shops to rely on, so Vinny was forced to figure stuff out on his own.

“It started with the 7.3L and figuring out how to make them tow better, get better fuel economy, etc,” he says. “We would put in an Edge programmer and a new intake and exhaust and it would really wake them up. As a 16-year-old, it was pretty impressive. My passion for it grew from there.

“Eventually, I started my own timber frame company building timber frame homes, and when a truck would go down, you’d take it to the dealership. They would throw parts at it and they would guess at it, and it would cost you $10,000 before they finally got the right part. It was aggravating, so I started studying the fuel systems and the turbos and how everything worked and ticked, and eventually, accidentally got better at that than I was at building timber frame homes.”

Vinny continued to dabble in diesel work, and his new-found knowledge came in handy in 2010 when the economy tanked and left him without work.

“What we saw happening is people were spending a lot of money to fix up older diesels and nobody was buying new diesels,” he says. “I got in at the right time. I started out at a shop called CN Diesel Performance, and I would just moonlight there. I would literally go down there and after the owner was shutting up shop, I would stay late and sling clutches in trucks or throw turbos on or whatever he needed done. I was essentially going to diesel school for free is how it worked out.”

After getting some real-world diesel shop time, Vinny was approached by a buddy of his, who he had done work for in the past, about joining his company. That company was Alligator Performance, and Vinny agreed to take the job, which then led him to Lead Foot Diesel Performance.

“In 2013, I was asked if I would be willing to move to Georgia to work here at Lead Foot Diesel Performance,” Himes says. “At first, I didn’t think it would be feasible to move all the way across the country. However, my wife was ready to see some new scenery. The kids were getting older and in school, so we made the jump and made the move. We’ve been here for almost eight years now. We’ve gone from three mechanics in a two-roll-up-door shop and we’re currently in a 30,000 square foot, 24-bay shop. We’re having a blast. We’re still having fun, and I think that’s how you know you’re doing it right.”

Lead Foot Diesel Performance’s owner also owns a land clearing and grading business. As such, he owned a number of diesel trucks and would tinker and soup them up on the side. He got known for his side work, and similarly to Vinny, his hobby became his job when the economy went south more than 10 years ago.

“Lead Foot Diesel Performance became legitimate in 2007,” Himes says. “We have 18 employees today. We were exclusively diesel engine for many, many years. We tried to avoid the transmission side of things just because it’s not what we were good at. We’ve inevitably been sucked into that now. We weren’t really interested in lift kits, wheels and tires either. However, over the years, you get customers that you do an engine build for, and then you refer them over to somebody else for something and then it goes poorly and they come back and they’re looking for recommendations, and eventually it just evolved into customers not trusting anybody else except for us.

“Now, we’ve evolved to where we’ve got the diesel repair and performance side, a full-blown fab shop, we do suspension modification for high-performance applications, but sled pulling is really what we’re well known for on the performance side. We specialize in 6.0L Powerstrokes, but we also work on Duramax and Cummins.

“The biggest thing that we’ve changed in the last year is we started doing a lot of off-road motorsports. Customers would come in with a Cummins truck loaded down with a trailer behind it and a bunch of Razors and Rangers, so we started doing work on those too. We’ve actually submitted an application to become a Polaris dealer because we have this huge car lot and we have this huge showroom. We’re kind of smack dab in the main corridor that most of Georgia has to go through to go out and play with their Razors, four wheelers and dirt bikes.”

According to Himes, Lead Foot Diesel Performance has inevitably grown every year and there’s no signs of slowing it down or stopping it, even through COVID. In fact, Himes says 2020 will be the shop’s best year ever. That growth is also demonstrated in builds like the recent 2003 Ford King Ranch dually with a 6.0L Powerstroke.

“This truck that we’ve built is for a good customer of ours and his company,” Himes says. “It started out that another shop did a bunch of work on this truck. The truck looks awesome from outside. It’s got a custom paint job, a massive lift kit with King coilovers on all four corners, and it had okay wheels and tires on it. It was one of those trucks that you look at and you can tell somebody spent a lot of money to not do that right. Then, you pop the hood and it looked like your grandma and my grandma got together overnight and decided to put down their crocheting needles and became diesel mechanics. It was horrible.”

The customer was pretty upset and after he picked up his truck and paid north of $30,000 for the turbo kit this shop built for him, he went to Lead Foot Diesel Performance.

“He came to us and said he didn’t want to talk about money or time, he was going to leave his truck with us,” Himes says. “He said, here’s the keys, make it look as good under the hood as it does outside. And so we did.”

The truck itself started its life out as a white on gold 2003 King Ranch dually. It is currently sitting on 12 inches of lift with 40-inch tires and it’s got a really fancy service-style bed on it.

“We took a service bed and customized it,” he says. “We slipped off the fuel door and moved the fuel fill up into a toolbox, so it’s just really clean and streamlined on the outside. Everything is tastefully done.

“We ordered him some totally custom wheels and did some super cool powder coating. We went gloss black and this beautiful ruby red metallic. We also accented the entire engine bay with the same thing.”

Under the hood, the King Ranch has a 6.0L Powerstroke, which Lead Foot made sure to pay special attention to.

“It’s a 700-horsepower truck,” he says. “There hasn’t been anything skimped on inside or outside this truck. The truck is just one of those builds that you look at and you know it’s been done 100 percent right.”

“We pushed the Kill Devil heads pretty hard here because these 6.0L cast heads can potentially crack,” he says. “Even after you address the head gasket problem, you can slap a set of ARP studs in and machine the factory heads flat and think you did everything right. But, they have a casting flaw inside the head and it could let go years later and start mixing diesel with the coolant. Kill Devil Diesel is the first company that’s addressed that issue correctly. With the Kill Devil Diesel aluminum heads, we don’t have to worry about that, and the heads come with oversized valves and heavy-duty valve springs.

“It’s also got a Colt Stage 2 camshaft in it. We didn’t want to mess with cutting or valve relieving pistons just because of compression and stuff. The customer does travel quite a bit, so we don’t know if he’s going to be out west in a cold winter climate at high elevation. We didn’t want to cause any drivability issues with him being all over the place. It’s about as maximum as we can do without turning a good, reliable daily driver into a race vehicle that has race-related problems and issues.”

Aside from the engine getting upgraded components, Lead Foot Diesel also dressed up the engine with the help of Art Martinez of PSP Diesel out of Texas. Lead Foot bought Moroso billet valve covers, a billet oil pan, a new wiring harness, a fan shroud, and all the billet engine accent pieces they could get.

“When you pop the hood, it looks like a showpiece,” he says. “Nothing was skipped. The finest little details were addressed. We even had the engine wiring harness modified. A lot of the wiring harness that you see typically on a 6.0L has been hidden, so it allows us to show off more of that chrome billet powder-coated accent pieces of the engine. We’ve also replaced all the old parts in the engine bay, so nothing looks worn out, faded, or sun bleached, everything looks brand-spanking new. It’s just super, super clean.”

According to Himes, the customer has spent well over the $150,000 mark on this build, but unlike the first time, he’s now getting his money’s worth.

“This truck looks amazing, but it is truly an off-road vehicle and it will be used off road when it’s all said and done,” Himes says. “It might hit a couple of car shows before that time, but every aspect of what we’ve done has been for a purpose and a reason – not just to look good.”

Advertisement
In this article:AMSOIL, diesel, Diesel engines, Diesel of the Week, Ford, Powerstroke