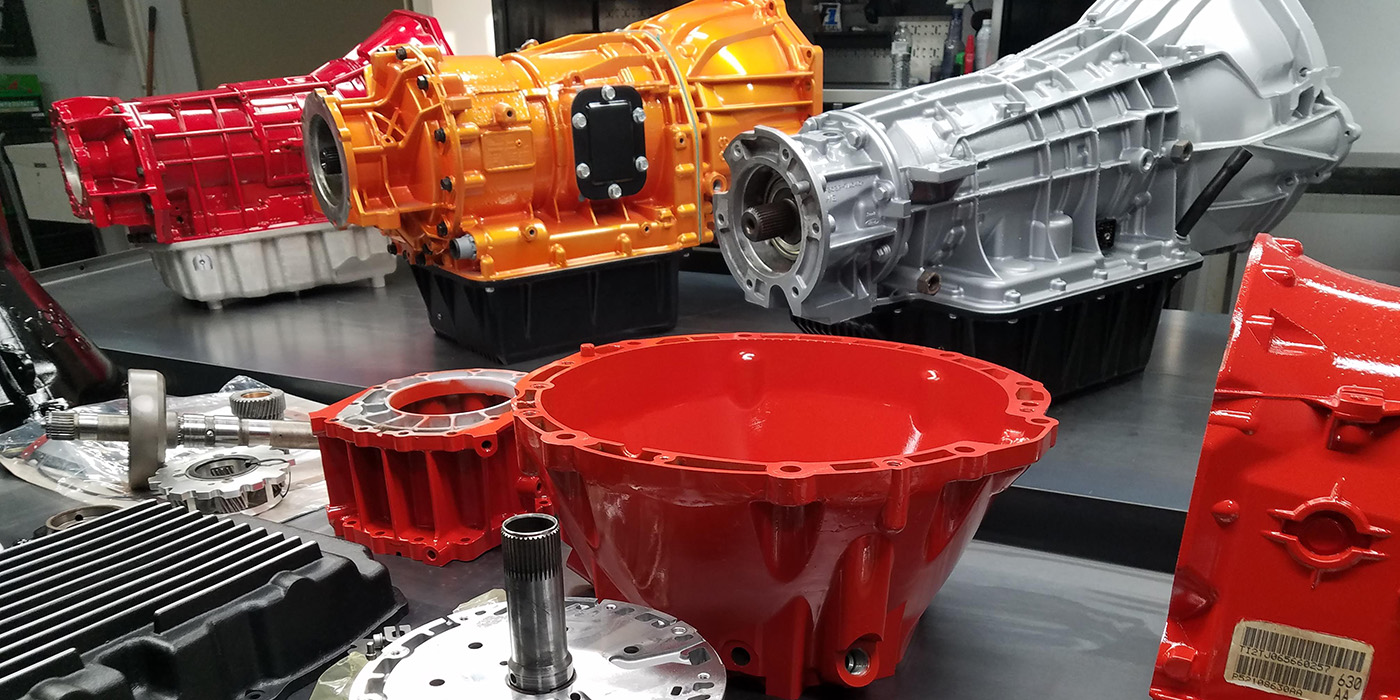 Diesel owners who add big horsepower, wheels and tires also need some driveline upgrades to keep it all together.

We’ve covered the rise in diesel performance over the years, and it has been fun to watch talented builders find clever ways to eke out more and more power. One thing we rarely mention, however, is the transmission upgrades you need to be able to handle those power increases.

We spoke to Frank Wulff of Frank’s Transmission in Richmond, MI, who said that due to being in a rural area, diesel trucks are pretty popular for all sorts of activities, including towing, work and play, so they started working on the transmissions. “My son Jason is a big-time into the diesel stuff. He is friends with Derek Rose, who owns DNR Customs. He’s one of the top diesel drag racers in the world, and we build a lot of transmissions for him.”

Wulff said they were building about two performance diesel transmissions a week before closing the doors permanently in March. Since then, Jason moved down the road to work with Rose at DNR full-time as a transmission builder. One of their most popular transmissions is the 68RFE found in 2007-2017 Dodge Cummins trucks with the 6.7L engine, and Jason has rebuilt many of them over the years.

According to Wulff, diesel owners who add big wheels and tires also need some driveline upgrades to keep it all together. “A lot of times, these guys take a 68RFE and beat the hell out of it. But, if the tires are too big and they have too much power, you need to change the rear end ratio on the differential. If the guy’s pushing a 3.73 and he’s got bigger tires and everything, you should change it to a 4.56 or something like that.”

DNR Custom’s Derek Rose said that it was a no-brainer to bring Jason on full-time since he was already building their transmissions anyway. “We were a little bit limited when Jason was at Frank’s because he could only build a couple of transmissions a week in between other jobs.”

Rose says they have the diesel market pretty well covered in their area. “We do a lot of 68RFE and 48RE transmissions, which covers trucks from 2003 to 2019 with those two transmissions.”

But the market for diesel transmissions is split among the big three OEMs with Ford, GM/Alison and Chrysler. “We’re more known on the Chrysler side. There’s a lot of Ford business in the area, too. But we’re so busy doing the Dodges that we just focused on them initially. Now that Jason’s on board, we can branch off and do some others he’s been building for years.”

According to Rose, while the 68RFE is a new transmission than the 47/48RE and used on late-model Dodge trucks, it’s not as durable or strong for higher horsepower diesel engines.

“They have very inadequate parts and features,” says Rose. “The 68RFE was derived from a minivan transmission, so it was designed for light-duty trucks/vans and has all light-duty parts. Everything’s just really small, but the aftermarket has come up with decent upgrades to them. Still, no matter how much money you spend on them, they’re weak. With proper tuning and a good setup, they are a solid transmission. Once you spend the money on getting one built, even if you smoke a clutch, they really don’t have hard part failures. The clutches are just undersized.”

The bottom line with the 68RFE is that it is very smooth and shifts nice and can handle moderate power upgrades (up to about 800 hp), but there’s a trade-off with clutch wear if your customer does a lot of heavy pulling or drag racing. In some cases, it may be better to swap out a built 47 or 48RE that can handle more power, but is a little clunkier than the 68RFE.

ATS Diesel specializes in building upgraded transmissions for high-performance diesels. Owner Clint Cannon uses their YouTube channel to explain some of the upgraded internals they offer on Chrysler 47/48RE transmissions.

ATS uses all-billet components and a heavy-duty pump in all of their transmissions, according to Cannon. “The big thing on the 47/48 is they are old and many are worn out. A nice reconditioned pump and oversized gears give you more volume at a lower speed. When you lock it up in fourth gear, the Cummins makes so much torque that you have to make sure you have the volume to feed the pump. It clamps the clutches so you don’t get any slippage.”

Cannon says the 48RE wasn’t designed as fluid or as smooth as the 68RFE. It’s a really old transmission, but it can hold power if they are built right. “There are several major failure points of the 48 transmission,” he explains in a recent video. “One of them is the hydraulics. The main valve body assembly, the secondary valve body assembly, the channel plate, and the separator plates that fit between it all basically control how the fluid flows to the clutch packs from the pump to the band, and so on. Every part of it is modified. There’s a lot of valves in this valve body that just wear out just because of time. If you increase pressure, they want to leak. We’ve identified all the valves inside the valve body that needed to be redesigned and bored out for bigger valves. We not only fixed the longevity issue, but we changed the calibration.”

ATS increases the line pressure on the 48, giving you more clamping force, and more lubrication to the gear set, for heavy pulling. The increased converter charge allows the torque converter to engage and disengage fully. “The last thing you want is a torque converter that’s slipping,” says Cannon. “Chrysler didn’t allow the transmission to harness the power of the engine of the torque of a diesel. You never experience the full potential of the diesel engine, especially when you turn it up.”

With a transmission properly programmed, it can harness all of the power of the diesel. “And when you add the co-pilot controller to it, then all of a sudden, you have torque converter clutch control,” Cannon says. The 48 transmission becomes so much more driveable with all of these upgrades. You just have to drive it to experience it.”

Karl Mireiter of RedLine Diesel Power in Medina, OH, says that they have developed specific transmission kits for all three OEM-branded transmissions, including the Allison-1000; Dodge 47/48s and 68RFE; Ford E4OD, 4R100 and 5R110. RedLine will upgrade any of these to one of their in-house kits that range from Stage 2 to Stage 5. “We change the torque multiplication in the torque converters. It harnesses the power of a diesel engine better. Our builds have a shift feeling that is second to none.”

RedLine also designed what they call their “Duraflite” transmission, a 47RE modified to be installed behind a GM Duramax engine. “It has all billet internals, stand-alone valve body, etc., and weighs about 150 pounds less than the Allison,” says Mireiter. “It is more consistent when you are making 800-plus hp. It will make a modified Duramax faster and more consistent at the track.”

RedLine’s 68RFE builds come in four options, depending on the customer’s needs, whether towing, racing or pulling. The Stage 2 build is designed to work with any truck from stock to 450 rwhp. It has a low stall billet single disk torque converter, all new clutches and steels, new bearings, gaskets and seals, RedLine high-pressure valve body with a billet lower channel plate and upgraded high front pump, new solenoid pack and sensors.

RedLine also builds what they call a “Stage 2.5” that will handle 550 rwhp. This is their most popular build. It comes with a 3-disk Goerend low stall billet torque converter, Sonnax billet overdrive drum with 35% increased clutch capacity, Raybestos GPZ clutches and steels throughout, with increased holding capacity in the 2nd and 4th clutch packs. With the upgraded transmission it can tow up to 20,000 lbs.

The build also includes something that not many shops can offer: a high-pressure dyno-tested valve body. Mireiter says that they are one of only a handful of shops with this type of Superflow transmission dyno. “It allows us to test our valve bodies and go through shift sequences as if it was on track. We can check any leaks and solenoids before it is installed, so it is excellent for quality control, and we use it for developing other builds.”

With the growing interest in performance diesel engines, it is only natural that the main conduit that puts the power to the ground gets a solid upgrade. DNR’s Rose says that he can build a 68RFE for about $8,200. A built 48RE can cost as much as $14,000 and can handle 1,500 to 2,000 hp. ATS has also released an Allison LCT1000 transmission that will be a direct replacement for a 68RFE and much more durable. As the market continues to evolve, so do the components. EB

Advertisement
In this article:diesel, transmissions