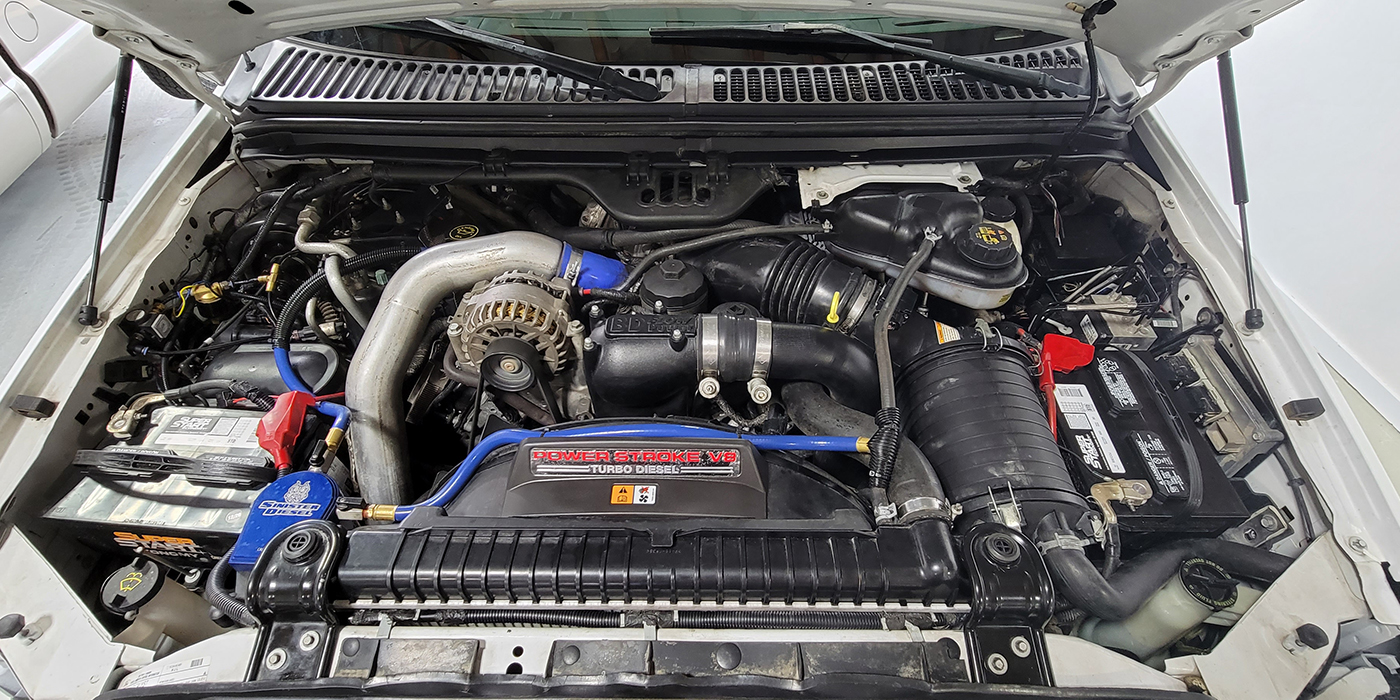 After the original 6.0L Powerstroke engine in Stroker Diesel’s 2006 F350 grenaded, shop owner Richard Whittaker decided to rebuild the engine with a focus on better towing performance. See what went into the new engine build!

Richard Whittaker owns and operates Stroker Diesel in Salt Lake City, UT. The diesel shop is essentially a Ford dealership without the Ford name on it. They specialize in Powerstroke engine work and also buy and sell trucks. Whittaker opened Stroker Diesel in 2014, but his love for all things diesel began well before then.

“I first liked diesels because of the size of the vehicles,” Whittaker says. “I also liked being able to make an engine run from nothing. Every engine sounds good once it’s running right.”

Richard took his background working in heavy equipment for both on-road and off-road applications and decided in September 2008 to work for himself with a mobile service truck.

The 6,000 sq.-ft. shop recently added another 3,000 sq.-ft. building to help house all the work, which is done by Stroker Diesel’s 10 full-time employees. The shop sends out its machine work, but everything else is done in-house.

“I can pretty much do anything here and the only thing I cannot do is bodywork,” Whittaker says. “We do bumpers, swap beds, doors, hoods, electrical, drivetrain, differentials, transmissions, etc. A lot of our work is mainly engines and a little bit of suspension work. We have a dealership here now as well, so we can buy and sell Powerstrokes.”

One Powerstroke truck the shop very recently sold was a 2006 F350 manual crew cab long bed with a 6.0L under the hood. It had been Richard’s shop truck for a number of years. They recently rebuilt the engine to add some performance for better towing capability.

“It’s an ‘06 6.0L manual ZF6 four-wheel-drive dually,” he says. “We pulled the engine out to put another engine in it because we grenaded the other one that was in it. Those 6.0Ls are pretty stout for a bottom end. Just the top end on those things need some parts replacement.”

To kick off the rebuild, Stroker Diesel opted for new studs, head gaskets and Ford heads. The engine got new stock pistons, rods and a crank that got turned .010˝ over. The shop put in an S300 (63/68 x .88) turbo along with some 175cc/30% over injectors. An S&B intake and an AirDog fuel system were also part of the build.

The F350 dually was used by the shop to tow a 21-foot flatbed that would pick up customer trucks, equipment and whatever else the shop might have needed. To ensure the truck wouldn’t grenade its newly rebuilt 6.0L Powerstroke, Whittaker added a rev limiter, so it wouldn’t hit 5,500 rpm.

The 6.0L Powerstroke should be good for 500 horsepower to the wheels, which is a lot for a manual dually, and it’s now in the hands of a new owner following this refresh.