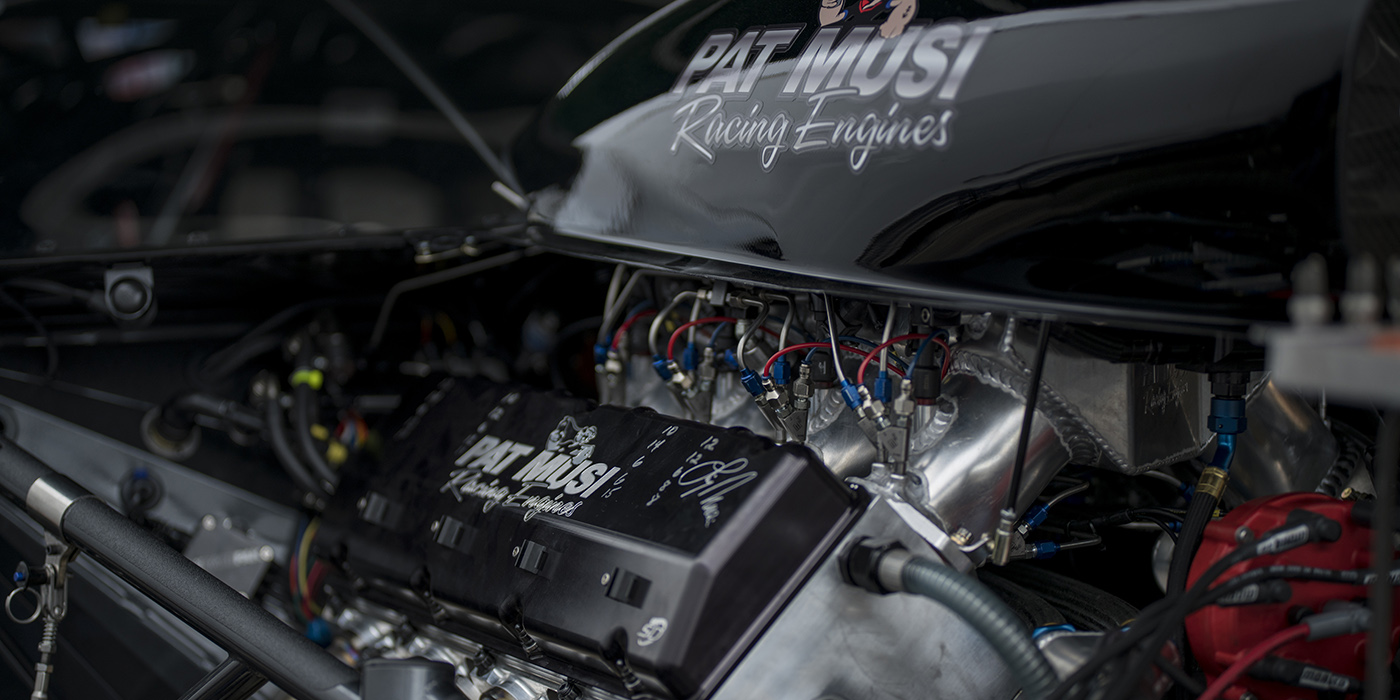 These days, it’s impossible to look at a nitrous engine without recognizing Musi’s influence on the combination. He made advancements with nitrous power that no one saw coming, earning him prestige in the industry.

Pat Musi is an engine builder who has worked hard to make a name for himself. Combining an innate ability to think outside the box with a dedicated work ethic that’s never left, Musi has forged an incredible path as one of the innovators of the nitrous engine.

What started as a career in Pro Stock in the early 1980s shifted to nitrous racing more than 25 years ago, joining a boom period for the power adder as Pro Modified in IHRA and Pro Street were making headlines in drag racing. The nitrous engine had captured the attention of racers and race fans, giving credence to a power adder that was also capable of producing results on the drag strip.

Seeing the innovation in the segment, Musi saw an opportunity to take it even further. Starting with his Pro Street dominance, Musi made advancements with nitrous power no one ever saw coming. From recognizing and harnessing EFI technology to developing parts specifically for his nitrous engines, Musi has become a household name in nitrous racing.

These days, it’s impossible to look at a nitrous engine without recognizing Musi’s influence on the combination. From his monstrous 959 cubic-inch nitrous engine to the laundry list of world champions and records his customers have achieved, Musi took nitrous racing to a new level during a time period when many thought the combination was dying out or had reached its potential. His daughter, Lizzy, has become a superstar in drag racing, thriving with nitrous power on Discovery Channel’s Street Outlaws television franchise. But, it ultimately goes back to Pat Musi being an innovator by nature, which made him a pioneer with nitrous power.

“We’ve always tried to stay a step ahead,” Musi says. “That’s why I race the car. You’ve got to be out there and be involved. You can’t just sit at home and hope it’s going to go right. You’ve got to be hands-on, and we’re constantly working. We’re never happy with it. I’m always trying to improve something, whether it’s a fuel pump, ignition system, power management, or whatever.”

One of the first applications of nitrous oxide in major drag racing occurred in the early 1960s, during NHRA’s fuel ban. Racers rediscovered aircraft technology utilizing nitrous and by the late-1970s, nitrous oxide kits were a popular choice for drivers. Ron Hammel and his 10,000 rpm Speed Equipment company started selling kits in the late-1960s, while Mike Thermos – who had a heavy influence on Musi’s nitrous success, especially with EFI – founded Nitrous Oxide Systems (NOS) in 1978 with Dale Vaznaian.

The Pro Modified class helped boost the popularity of NOS, leading to the incredible intrigue of racing with a nitrous oxide system. The appeal of strapping a nitrous oxide system to a car, especially in the early days of Pro Mod or Top Sportsman where the rules were minimal, was like catnip to racers who were seeing incredible results with nitrous.

In 1987, UDRA racer Bill Kuhlmann used a nitrous kit to shatter the 200-mph barrier in his Camaro, going 202.24 mph at Darlington to become the first doorslammer to cross that 200-mph threshold. As the intrigue and popularity of nitrous racing grew, it became evident only the brightest minds could harness the complicated matter of racing with the combination without detonating parts or engines. While Pro Stock racers were toiling away for hundredths of a second, nitrous racers in IHRA or UDRA were getting huge performance gains. But it was a delicate balance between success and massive, spectacular failure with nitrous, and it’s something Musi learned very early in the process.

“The we way looked at it, you always needed to sacrifice some of that big power, maybe by 5-10 horsepower because your engine has to be durable for nitrous racing,” Musi says. “That’s the big mistake guys are making and have always made with these nitrous engines. Our stuff lives and you can run it and run it. Every part of the engine has to be better and stronger and we’ve constantly worked to refine that.”

Musi’s ingenuity came from running in Pro Stock in the 1970s and early 1980s. He finished fourth in points in 1981 against the likes of Bob Glidden, Lee Shepherd, Ronnie Sox, and Bill “Grumpy” Jenkins, advancing to the finals in his first two NHRA races. That was coupled with his IHRA success, but as massive money was coming into the class, Musi wanted to find somewhere else to showcase his creativity.

By the mid to late-‘90s, Pro Modified, Top Sportsman and NMCA Pro Street were thriving with nitrous engines. The early days of Pro Modified were limited to a 710 cubic-inch nitrous engine with several wild body styles, and Musi jumped into the Pro Street class feet first, immediately calling out the biggest name – Tony Christian.

It created a thrilling rivalry and Musi’s Camaro dominated, winning eight NMCA/NSCA world championships between 1997-2005. He raised the bar in the class, evolving with a huge 737 cubic-inch engine.

“We immediately ran well there and had a lot of fun,” Musi says. “But we had to make everything. We made our own head gaskets, made our own manifolds, all of it. We’d take a head from a Corvette ZL1 and grind it away and use it.

“We figured out what it took to make the motor go fast. At the end of the day, it’s still a normally aspirated engine. You’re not supercharged. There’s no forced induction. That’s what a lot of people don’t understand. It’s dependent on your camshafts, how you build the engine and how hard you’re pushing the engine.

“It becomes a tuning game and it gets to a point where you can’t put more nitrous in it. There’s a fine line with compression ratios, too. You’ve just got to balance it all and sometimes it takes thinking outside the box.”

That creative thinking came early in Musi’s Pro Street success as he dove into EFI technology. He envisioned it being the perfect pairing with nitrous engines and far better than using carburetors. Musi fully embraced it. Harold Martin was considered one of the original pioneers of EFI technology with a nitrous engine, but Musi undoubtedly took it to places no one could have predicted.

“It was the next big thing for me,” he says. “They were laughing at me at first, but I’m telling you, I forced everybody to run fuel injection. I take pride in that. Everyone runs the same fuel pump and the same fuel system we developed over the years.”

Thermos helped introduce EFI to Musi and he ran with it. It made the nitrous car more durable, reliable and ultimately, much quicker and faster. As Musi was having success with EFI, it came to the forefront in 2010 when he advanced to the final in Englishtown at his debut NHRA Pro Mod race, becoming the first Pro Mod car to win with EFI that same year when he triumphed in Norwalk.

“We’ve always been prepared and put in work to make sure we were prepared with this combination,” Musi says. “We’re constantly evolving. In the past 10 years or so, the engine has developed where we’re able to run more nitrous through them. There’s no doubt the motors have evolved with EFI and nitrous, too. It’s all come together.”

There have been certain ebbs and flows with nitrous racing. Critics figured the combination could be done for in the mid-2000s, but a flurry of competition with different engine builders and interest in the class resumed at the end of the decade. Musi had already established himself as a top nitrous engine builder at that point, selling 540 cubic-inch engines all over the world.

Jim Halsey made the first 5-second quarter-mile pass with a nitrous car in 2008 and nitrous racing has since maintained a steady growth and interest. Much of that has to do with Musi, who has made the nitrous engine a frontrunner in several classes and series.

From Rickie Smith winning three world championships in NHRA Pro Mod to Tommy Franklin claiming Pro Nitrous titles in PDRA to his daughter Lizzy’s success with Street Outlaws and an immense amount of success in the Sportsman ranks, Musi has found what can only be described as the magic touch with nitrous engines. Dean Marinis also holds the record for the quickest quarter-mile pass by a nitrous car – a stunning 5.557-second ET at 255.19 mph in a Musi-powered Camaro at Maryland International Raceway in 2019.

“I took a lot of flak when I went to the 903,” he says. “I remember David Reher saying that thing will never run. Now the 903 is the little motor. Meanwhile, we’re working on the 959 and just laughing. You can’t make it too big.”

Today, Musi has established strong relationships with the likes of Edelbrock, helping take nitrous performance and technology to another level. In the past two years, Musi and Edelbrock have partnered to build cylinder heads, manifolds and an expansion on a longstanding crate engine partnership. The 555 crate engine is a complete ready-to-run powerplant making an incredible 723 horsepower.

It’s also kept Musi ahead of his competition when it comes to reliability and innovation, two factors that will continue to drive Musi’s success in the nitrous ranks and build his reputation as one of the most successful engine builders in drag racing — regardless of power adder.

“The durability of these engines is a really big deal,” Musi says. “They stand up to quarter-mile racing and our customers are not working on their motors nearly as much as other nitrous combinations. We’ve worked hard on a tune up that keeps the motors fast and durable. The maintenance program (for the 959) is minimal at the race track and the durability is pretty remarkable. Nobody is close to that.” EB