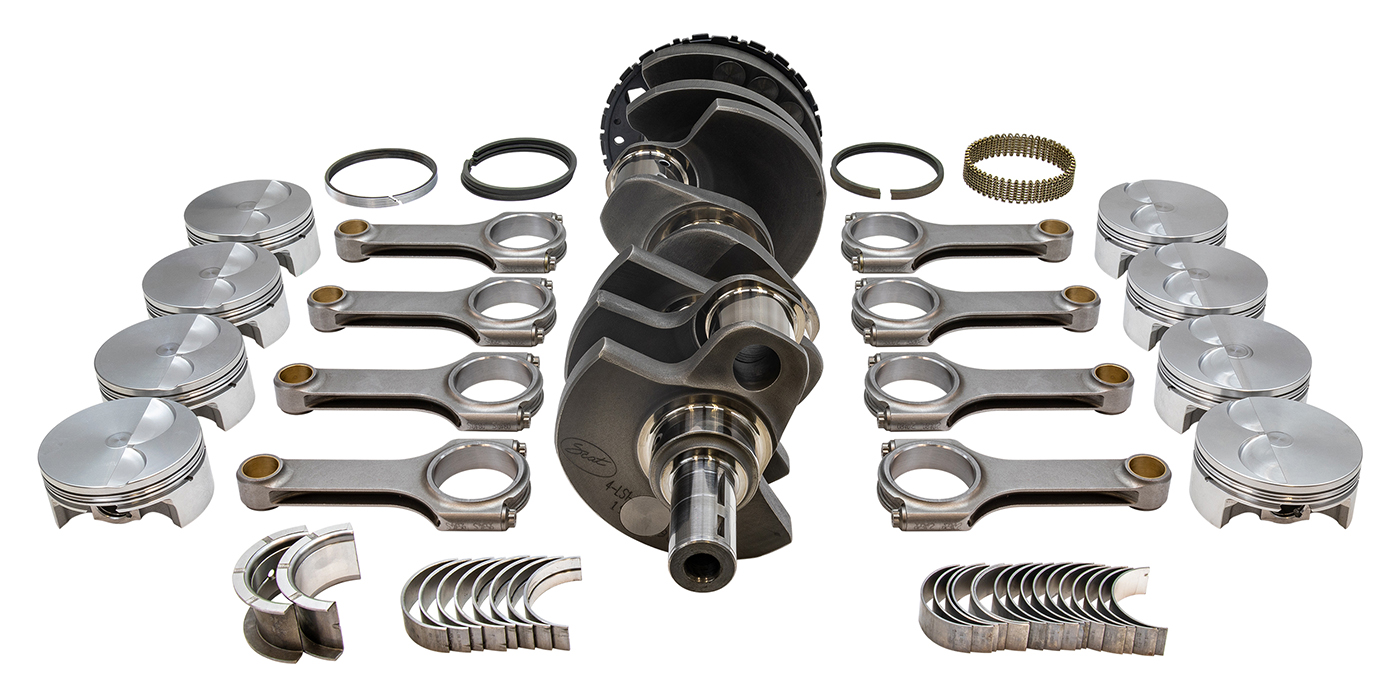 Rotating assemblies often turn into a guessing game as enthusiasts struggle to find the right option for their project. No matter who it is buying a rotating assembly, there are a few key factors to consider before making all your selections.

As more and more people are looking to build performance engines for their hot rod project, their streetcar, their racecar, or whatever the case may be, the many options available to engine builders and consumers when it comes to the rotating assembly, can be down right overwhelming. As such, manufacturers have been finding ways to make it easier to deliver the right parts for the horsepower and application, without all the fuss.

“Rotating assemblies in general are the fastest growing part of our business,” says Scat Crankshafts’ Tom Lieb. “The reason for that I think is several fold.”

According to Lieb, the number of parts combinations are infinite because you have different cylinder heads that have to interchange with different pistons. There’s different bore sizes and strokes and there’s different budget factors. There’s all sorts of things that lead you down different paths when it comes to choosing your crank, rods and pistons.

“For warehouses to have all the component parts in stock, it’s almost impossible,” Lieb says. “If a customer wants to build a 383 Chevy, you have to start by seeing whether they have the crankshaft in stock. Then, that crank is combined with certain connecting rods. Do they have that? Then, you have to know what cylinder head you’re running. Do you want a flat top, a dish, or a dome piston? What bore size do you want and is it compatible with the stroke and the rod length? Do I have the pistons, rings and bearings?

“Even if they have all that in stock, the customer still has to get the assembly balanced. What we’ve done is taken all that away from the warehouse and put it all in one box, so that you can order a part number. We stock all the parts, and because our volume is what it is, we’re capable of stocking those parts.

“We also have the machine shop and we treat each rotating assembly as if it was an individual order. Nothing is done on a production basis as far as balancing, so the quality of the balance work that you get is as good as any engine shop can give you.”

Crank manufacturers these days have gotten very good at helping customers select a crank and the associated items to match it up to a certain budget, horsepower and application.

“We do offer rotating assemblies. We sell quite a few kits each month,” says Brook Piper of Callies. “The majority of our rotating kits are sold to the general public or to racers.”

According to Piper, most of their engine builder customers know exactly what they want, so they aren’t always looking for help selecting a complete rotating assembly. In the case of Scat, Tom Lieb says it’s a 50/50 split between engine builders and consumers who buy their assemblies.

No matter who it is buying a rotating assembly, there are a few key factors to consider before making all your selections.

“The most important thing when you sell a rotating assembly is to ask a series of questions of the customer to make sure that everybody’s on the same page, because the customer doesn’t necessarily know what all his options are,” Lieb says. “The application starts out with dollars and cents. What’s the budget and what are your expectations? Once we know that, we can match the right crank and rod package and then match that with the piston for the desired horsepower. At the end of the day, the customer has everything in that box at the right price for the expectation of the engine build. We use our expertise to pick the best parts for the application.”

Callies offers V8 cranks for as little as $2,000 and as much as $6,500, so understanding a customer’s budget is crucial.

“If you don’t know the budget, you might start talking about a package that will blow them out of the water and you lose them that way,” Piper says. “Some guys have a horsepower goal in mind, but they aren’t fully aware of what that costs. Some guys say they want to make 2,000 horsepower, but they only have $2,000. That’s not going to work.

“When we build an engine kit for someone, we go right down the list with them – what are the expectations for power? Are you using a power adder or is it naturally aspirated? If it is using a power adder, how much boost or nitrous are you looking to use? From there, we get with him on the cylinder head and the bore of the block and work backwards at getting him the best items we can.”

Both Scat and Callies have the ability to offer customers so many different rotating assembly options because of their depth of inventory. Both companies keep thousands of cranks and rods on hand, and they work with numerous piston manufacturers.

“We have literally thousands of combinations at the ready,” Lieb says. “We have thousands of cranks in stock all the time. We stock probably 1,000 sets of pistons. That gives us a really good cross section. The key to the whole thing is that we have a large inventory.”

According to Piper, Callies keeps a lot of raw material onsite and says there’s probably 3,000 forgings in-house, so they always have what they need. What’s been a popular option in recent years has been the boosted applications.

“More and more, it seems everybody is adding boost to their engines,” Piper says. “Years ago, it seemed nitrous was the thing. Now, everyone is using superchargers, ProChargers and turbos. If you’re looking at a Gen III Hemi or the LS/LT stuff, guys typically want to put 10-12 lbs. of boost to it, which is pretty easy to do.

“For something like that, we’d recommend our Compstar crank and rods and then a piston manufacturer of their choice. We deal with Wiseco, JE, RaceTec, CP, etc. Some guys have a certain piston they have to have, so we cater to whatever the customer is looking for.”

Since so many customers are looking to hit that magical 1,000-horsepower mark, Lieb says those applications require a forged crank.

“If you’re looking at an LS application, we would recommend a forged crank,” he says. “We automatically assume people are going to abuse it and want that horsepower out of it. We try to draw the line on cast cranks in the small block arena at 550 horsepower. On the big blocks, 700 horsepower is a good line between forged and cast. If you start talking 1,000 horsepower, that’s a forged crank for sure. If you start talking about artificial induction such as nitrous, supercharging or turbocharging and you’re looking to go north of 1,500 horsepower, that’s when you should be looking at a billet crank.

Something Piper says has been popular for Callies has been their center-counterweighted cranks because of all the boost prevalent today.

“Our center-counterweighted cranks keep things from flexing inside the motor,” Piper says. “The LS are the new center-thrusted motors today. You’ve got a pivot point in the center on the three main, so having counterweights on both sides keeps the crank from whipping or trying to bend. When a motor is under load, it is moving and there is oscillation back and forth in that crankshaft. The center counterweights keep it from bouncing around. Our center-counterweighted cranks are pre-chamfered to clear pretty much any block out there and any main webbing.”

Popular applications for Scat’s assemblies have been the 350 Chevy, the small block Ford and the LS. According to Lieb, Scat sells cast cranks three to one over forged cranks.

“The cast crank is a staple,” he says. “It’s an inexpensive way to get more cubic inches or to get more power. However, we have parts available from one end of the spectrum to the other when it comes to crankshafts and connecting rods. We’ve got cast cranks, forged cranks, billet cranks, and custom forged cranks.

“As far as connecting rods, we’ve got various levels of rods that, from the standpoint of strength, match the horsepower in either I-beam or H-beam configurations. With the pistons you’ve got different alloys and different coatings for different horsepower. As you move up and down through the spectrum, we’ve got parts that are compatible with each other and that are compatible with the wallet. The information that we draw from is the thousands of rotating assemblies that we’ve done over the years and we’ve tried to take the guesswork out of it.”

With manufacturers helping you make all the right choices, selecting a rotating assembly really comes down to two key things – budget and horsepower goals. EB

Advertisement
In this article:Rotating Assemblies