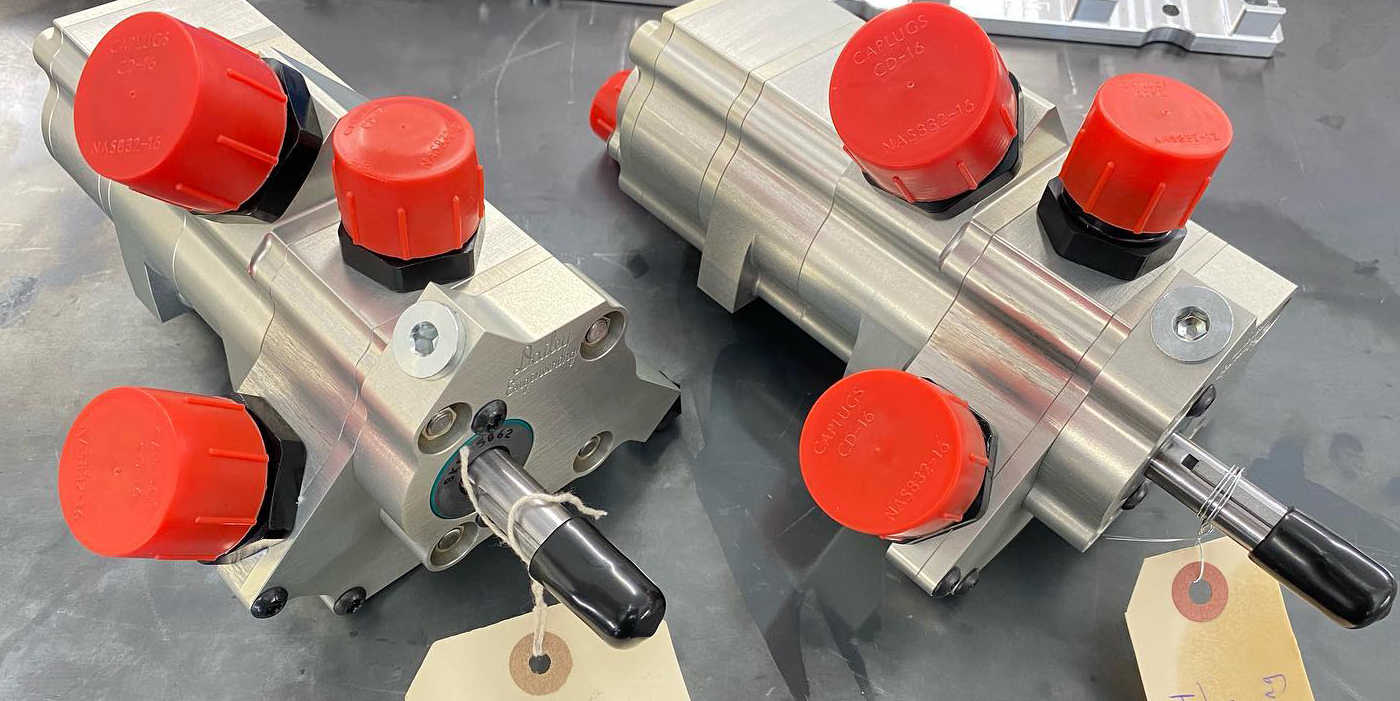 Choosing between a wet sump oiling system and a dry sump oiling system comes down to a few key factors such as the application, the engine’s horsepower and rpm range and how much you’re willing to invest in a lubrication system. Your choice may also be limited by track rules.

For customers who have already spent a ton of money for block work, pistons, rods, heads, valve work, a crank, balancing, a hot cam, and valvetrain components, they may be ready to save a few pennies when it comes to the oiling system. Don’t make that mistake! The oiling system is not an afterthought. It’s the key to protecting those expensive components and keeping them lubricated. It’ll also impact your vehicle’s performance.

When speaking in terms of race engine oiling, two distinct methods exist for supplying internal components with the vital lubrication they demand – a wet sump and a dry sump. A wet sump system is based on the OE oiling system and can be enhanced with certain components to improve oil control and increase power. A dry sump system is designed for the top levels of racing where maximum power and oil control are absolutely essential.

In a wet sump oil system, the oil resides in a large oil pan containing a sump at the front or rear of the engine. A pickup tube mounted to the oil pump collects the oil and sends it back through the oil cavities in the block. That oil then trickles back down through the engine during its operation to the oil pan and is repeated.

In a dry sump oil system, the oil is contained in an external reservoir rather than in a large, deep oil pan and is pumped into and out of the engine back through the reservoir via an external oil pump. These dry sump systems are more complex, require more space in the engine compartment and are typically more expensive, but they offer a number of exceptional benefits to those who can afford it and wish to gain every ounce of horsepower they possibly can.

When it comes to applications such as drifting, where an engine is being built to rev higher, make more power and accelerate a vehicle faster, a wet sump oiling system will only get you so far. The top echelon of drifters will be using dry sump systems.

“The ‘starting out’ drifter will first use the car as is with its stock wet sump oiling system,” says Moroso’s Thor Schroeder. “As their skillset improves and they are able to do drift moves at longer duration and greater angles, the oiling system will be working harder. A wake up call could be sending the rods through the engine block of their mom’s prized rear-wheel-drive luxury sedan or a flickering oil pressure gauge. At this point, we would recommend the individual buy mom flowers and install an oil accumulator and/or a baffled oil pan. To be effective, the baffled oil pan should have road race baffling (road race and drift baffling are the same).”

Moroso’s oil accumulators (hydraulic cylinder with billet aluminum end caps, air gauge, 1/2˝ NPT fitting)store oil under pressure, providing an instantaneous supply and releasing it to the oil system when the oil pressure drops below a safe level or is used to prelube the engine before start up.

The accumulator is tapped (could be by “T” ing into the return line of an oil cooler, through a Moroso accumulator sandwich adapter that mounts between the spin-on oil filter and the engine, or directly into an oil galley in the engine block) to the pressure side of the engine’s oiling system. When the engine is running, oil pressure forces reserve oil into the accumulator and compresses the air ahead.

“If the engine’s oil pressure should suddenly drop because of hard acceleration, severe cornering or hard braking, the air pressure immediately sends oil to the main galleries,” Schroeder says. “When the danger is over and the oil pump is once again primed with oil, the oil pressure forces oil back into the accumulator where it is ready for the next emergency. Moroso offers different sizes of accumulators and valving options to meet racer’s needs.”

Even the best designed or executed wet sump oiling systems have limitations, so when a racer experiences these limitations, a dry sump oiling system is the logical next step. As fore, aft and lateral G-forces increase, oil slosh inside the pan may be so severe that the pickup starts to suck air, which leads to sudden and precarious drops in oil pressure. If the situation isn’t remedied almost immediately, it can be bad news for the rod and main bearings. The high speed of certain engines can also cause problems in a wet sump application by moving too much oil. When you move too much oil through the engine, you get too much oil pressure. Some wet sump pumps have a bypass to control how much oil is going to the engine, but that can tend to aerate the oil.For those reasons, a dry sump system is what most serious competitors gravitate toward.

“At the top levels of drifting where competitors are putting the car at extreme drift angles for long amounts of time – hard right, hard left, accelerating/decelerating – a dry sump system will make sure that the oil pressure is at safe level,” Schroeder says. “The top-level drifters also put more stress on their engines by running power adders and high rpms, so a dry sump system will offer strong constant performance in the semi-controlled chaos that is drifting.”

With a dry sump oiling system, an externally mounted pump, generally with three or four stages, is used to “scavenge” or remove oil from the pan, deliver it to the storage tank and send it back through the engine. The pump is driven by a belt off the crankshaft. One of the first advantages to doing it this way is to have control over the pump’s speed. You can speed it up or slow it down by changing the size of the pulleys.

Scavenging is what pulls the oil and air inside the crankcase of the engine back to the oil reservoir. In some configurations, the oil will run through an oil cooler on its trip from the oil pan back to the reservoir.

“We have found that a basic three-stage dry sump system – one pressure section and two scavenge sections – is adequate for most applications and installations,” says Aviaid’s John Schwarz. “System design from the standpoint of oil flow and tank capacity is usually determined by the engine.”

Many of the pumps on the market are a positive displacement design, meaning if you turn the pump slower it pumps less volume and vice versa if you turn the pump faster. Ideally, you want the pump to turn quick enough to provide the engine with the oil it needs and maintain oil pressure, but not so quick that you’re bypassing oil.

“The primary value is the maintenance of a consistent, quality oil supply to the engine at all times,” Schwarz says. “There are secondary advantages such as reduced heating of the oil, additional oil capacity, reduced aeration, recovery of parasitic horsepower losses due to windage, and recovery of parasitic horsepower losses due to engine building techniques that allow for a significant reduction of internal engine drag.”

Since a dry sump system is evacuating the entire crankcase, it reduces an engine’s pumping loss and leaves more power available to put out to the crankshaft and the tires. Ring seal is a critical factor in keeping all of that cylinder pressure that is made and using it for the piston. If you think about how a piston ring seals, what happens is the difference in pressure between the combustion on top and what’s on the bottom of the ring actually pushes the ring out against the cylinder wall.

If you make the same amount of combustion pressure up top and you have vacuum from the oiling system pulling from underneath, the difference in pressure across that ring groove gets greater, so the ring seal gets better. A dry sump system typically makes more power because we reduce the pumping losses, we reduce the windage and we improve ring seal.

Other advantages of a dry sump system include increased oil capacity, more consistent oil pressure, the ability to easily add remote coolers, and adjustable oil pressure. And because the pan doesn’t store oil, it can be relatively shallow in depth to allow lower engine placement for improved weight distribution and handling – all key ingredients when drifting.

On top of that, dry sump systems from engine to engine only need to vary slightly, and because drift car drivers utilize V8s and inline 6s, manufacturers can easily adapt a system to fit racer’s needs.

“In those two applications, they could use the same dry sump tank and the oil pans would of course be different,” Moroso’s Schroeder says. “Oil pump wise, the oil pumps could be the same except for the mounting brackets.”

Aviaid’s Schwarz agrees, saying the only real difference between the V8 setup and the inline 6 is how they adapt the system to the engine. “Larger engines typically benefit from additional scavenge sections to increase the efficiency of oil recovery from the engine,” Schwarz says. “An LS engine will typically work fine with two pickups, while the longer 2JZ engine usually benefits from one additional pick up given how long the oil pan is.”

No matter the engine being used, if you’re a serious drift competitor pushing the limits of your car, a dry sump system will aid in your performance, because as some manufacturers have put it, dry sump oiling systems are the safest, most dependable oiling systems available.

Pat Musi's Love of Nitrous
Connect with us