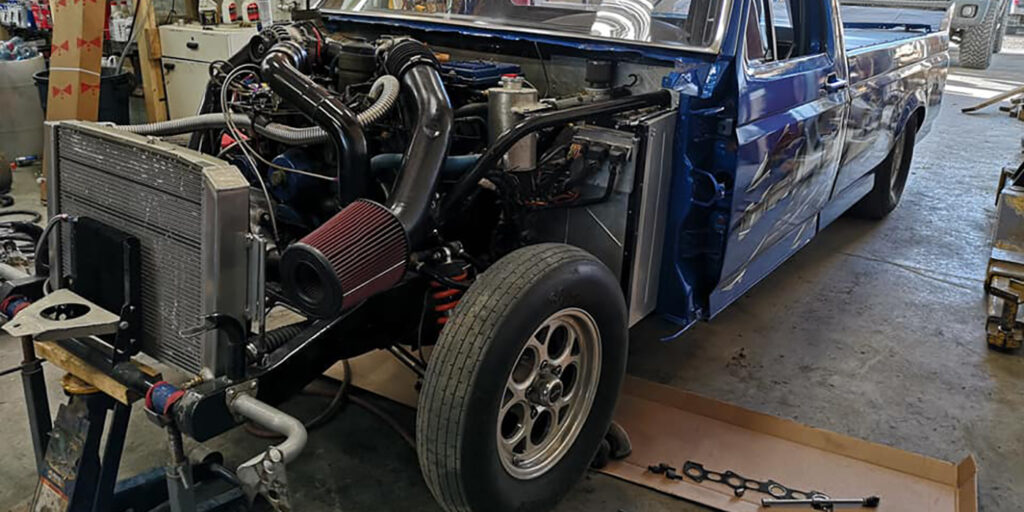 Chris and Malissa Jervis are two prime examples passionate industry folks looking to compete in the market as a family-run diesel shop. They share their passion and investment in the community, which gets so many of us excited about the industry. Both the diesel and performance automotive community exudes a love that often travels through generations for exactly that reason.

That’s certainly the case for Chris and Malissa. The couple initially went to high school together. However, it wasn’t until later on that they reacquainted out on the racetrack.

“Her family is big into street racing, and at the time I was racing,” Chris Jervis says. “Low and behold, here we are 11 years later with junior dragsters. It’s definitely a family affair for us.”

The 1,985 sq.-ft. facility may be on the smaller side with only two bays, but the team at Crucial puts in just as much work as the larger operations. Jervis says that himself and his two journeymen often work 60-65 hours a week to keep up with all of the work at the shop.

Before opening his own business, Chris worked as a shop foreman at Full Throttle Diesel Performance, which was his first dive into the aftermarket and performance world. While at Full Throttle, the shop purchased a ‘96 Ford F-150 off racingjunk.com with a 427 small block Ford engine in it that Jervis began to work on heavily. Flash forward to current day, Jervis co-owns the truck and is constantly working on upgrading it.

“They wrecked the motor and it sat for a couple years,” he told us. “We bought the rolling chassis from them, pulled all the gas engine stuff out of it, and then converted it over to diesel. All the suspension and whatnot was changed too to handle the weight.”

The diesel engine in question is a 6.0L Powerstroke that was sourced from a 2003 F-350 donor truck that had just under 300,000 miles on it. Jervis said confidently that he believes the truck is the fastest Powerstroke in Canada.

The 6.0L had a myriad of work done to it to bump up the horsepower. The engine was pulled apart in the beginning, but Jervis kept the factory block, crank and rods. The rotating assembly was completely balanced.

Some of the machine work was outsourced to other shops. For the new build, Jervis used Mahle pistons, which were done by River City Diesel. He also went with a Stage 3 billet camshaft and chromoly pushrods and valve springs. AMS Engines handled the cylinder heads, which got ported and polished.

“They were o-ringed and got a good valve job,” he says. “Pretty much it was a reman of the cylinder heads with a little bit of port work.”

Right now, the team at Crucial is building a custom intake manifold for the engine. The factory manifold will be ported in-house and will become a new product offered at the shop. The exhaust manifolds and up-pipes are all from BD Diesel.

“The fuel system is an Aeromotive A1000 that is feeding into a set of Warren Diesel Injection 250cc/100% hybrid injectors,” Jervis says. “We also use a lot of nitrous. Last year in an eighth-mile pass, we were burning through 3.2 lbs. of nitrous on a single pull. Three solenoids snuffed the flame, so we went back to two; one with a .125 jet and the other with a .060 jet. They’re wired to a button on the steering wheel and it’s not a progressive controller or anything like that. As soon as the light goes green, we squeeze both of them.”

For air, Jervis uses a fairly simple single turbo setup consisting of a KC Turbos Stage 3 drop-in VGT. The truck hasn’t been dyno’d yet, but Jervis is constantly taking it out to local race tracks and pushing it to its limits. Last year, the truck hit its best time – 6.00 seconds at 118 mph in the eighth mile. Jervis plans on shaving that time into the 5s this season with help from a new and improved chassis setup, the new intake manifold, and hopefully better traction.

“There’s not many five second trucks out there to begin with, and we’ll probably be the only one to run a VGT in the 5s,” Jervis says.

We’ll be sure to check in with Jervis later this year to see if he meets his goal!