Engine Builders: The AERA Technical Committee offers the following information regarding an engine oil leak for 2005-2007 Toyota 3.5L 2GRFE engines. Some 2GRFE engines may display evidence of a small oil leak, located on the rear side of Bank 1.

The source has been identified as unused side and end bolt holes in the right hand (Bank 1) cam housing cover. A repair procedure has been developed to correct this condition to utilize those bolt hole locations.

To repair this leak condition, obtain two p/n 90080-11344 bolts with washers from Toyota. An oil resistant anaerobic adhesive sealant, such as Three Bond 1363A (or equivalent), must also be used. Follow the two steps below to complete the repair.

Clean the affected area using a degreaser or other approved cleaner.

Coat the threads of the bolts with an oil-resistant anaerobic adhesive.

Engine Builders: The AERA Technical Committee offers the following information regarding a head gasket design change on 2001-’06 GM 6.6L Duramax diesel engines. Special surface cleaning procedures must be followed to allow a proper seal when using the new design head gaskets along with a change in the torque angle specification.

Inspect the gasket sealing surface for corrosion, especially in the areas that were in contact with the crimped tabs of the first generation head gasket. For surfaces that have corrosion or pitting in them, wrap a piece of flat steel with #600 grit wet grade sandpaper. Use a moisture displacing lubricant (p/n 1052864 USA, p/n 89020803 Canada) or equivalent to wet sand the block surface to remove any remaining gasket material or corrosion. Do not use any paper coarser than #600 grit.

Take care to keep the sanding block parallel to the block surface and evenly sand the sealing surface. Some areas of corrosion will still show a stain. Do not attempt to wet sand these areas down to a shiny metal surface. Change sandpaper as necessary, and clean surface with brake parts cleaner along with the head bolt holes and cylinder bores.

The second generation head gasket requires a lower torque angle specification for the M12 bolts. The M8 bolt torque remains the same. M12 bolts should be torqued to the following specifications:

M8 Bolts should be torqued to 18 ft.lbs. 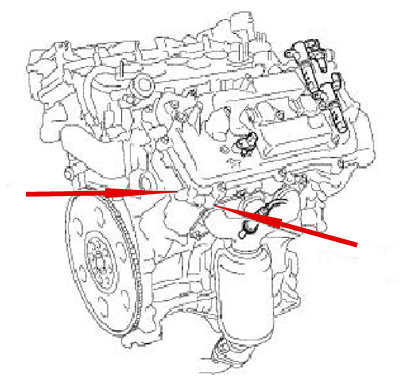 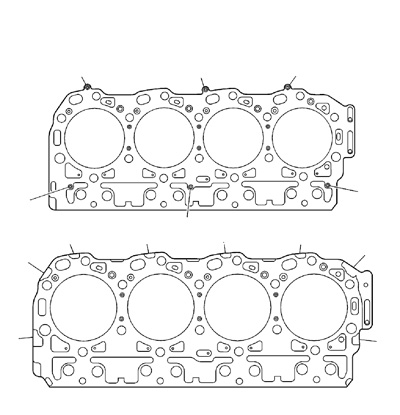