A cylinder head gasket caution has been issued for 2003-2006 Ford 6.0L VIN P diesel engines. This caution should be referenced any time head gaskets or cylinder heads are being replaced.

The manufacturer for this engine uses two separate facilities, one in Indianapolis, IN and the other in Huntsville, AL. While both locations build engines with the same critical data, three cylinder head variations have been used. There are engine serial number change dates to help in determining which cylinder heads were used.

The cylinder head gasket and locating dowels also changed in the 2006 model year to accommodate the increase in the dowel size from 18 mm to 20 mm. Using the wrong head gasket for the application will lead to engine damage if assembled that way. The revised dowel hole was made to accommodate the larger head bolts to be used in the new 6.4L diesel engine and was commonized for manufacturing purposes. The injector clamp design and associated cylinder head casting support area were also modified on the changeover date in early 2006.

If there is a difference in dowel hole size between the head and block, a special “stepped dowel” (p/n 6C3Z-6B041-B) is available to accommodate proper assembly. The cylinder head gasket and injector clamp versions are not interchangeable; they must be used with the corresponding cylinder head versions. Refer to Chart 1, to determine application. 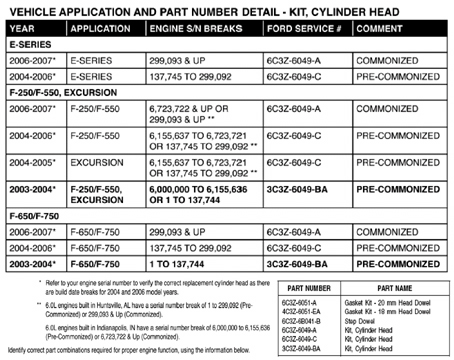