If there is a war being waged in the automotive aftermarket right now, it is one of information. More precisely, it is too often the fact that victims are suffering because of the lack thereof.

Be it the “Right to Repair Act,” casting proliferation or parts proliferation, what we need to know is all changing at breakneck speed.  These are just a few of the skirmishes being fought on many fronts each and every day in the automotive aftermarket for both manufacturers or engine builders and remanufacturers alike.

One of our best defenses in this war is actually the consolidation of components or castings. This process invariably reduces complexity, which in turn reduces errors and warranties and thus helps produce a better product.

Sometimes the biggest helps can be simple, and the information presented here today is just that. We are all constantly looking for ways to “add to the bottom line” while still continuing to improve our processes and providing our customer with a better product.  You may say that’s impossible but every once in a while you fall onto a nugget.

I’m talking about the 4.6L and 5.4L Ford “Triton Engines.” I know, I know: there has been so much information about these engines that there could not possibly be anything more to add. Well here’s one for you. Back in 2001 on the 4.6L (although this is a split year) and in 2002 on the 5.4L, Ford made some changes to the timing gear set, specifically the crankshaft gear (I am not going to count the two-piece gears seen in the early years because they have all been replaced by the one-piece). There was a shorter gear set used prior to the dates listed above and a longer gear after those dates. (see Figure 1)

The crank position trigger wheel changed as well. The early wheel that goes with the short gear is a PM trigger that has a spacer flange cast right into it. The later wheel, which is stamped steel, is flat and used with the tall gear (see Figure 2).

Knowing the differences in material, it is easy to see why the change was made, right? While they are identical to each other in location and number of cogs, the stamped steel wheel is much less expensive to manufacture than the PM unit. Together they equal the same thing, only one is cheaper to manufacture.

Well, here’s where it gets interesting. Anytime you’re looking to purchase the timing components for a complex DOHC engine such as the 4.6L or 5.4L, it is always less expensive to do so as a complete set. However, to this point I am unaware of anyone in the aftermarket manufacturing the timing set with the late tall crankshaft gear. Therefore you need to buy the early set and substitute the new style tall crank gear into it – which is still cheaper than buying all the parts separately. However, if you hit the 4.6L in 2001 (the split year) you could end up with the late gear and the early crank position trigger, or vice versa, neither of which will work in combination.

This is where the PBT (Practical Builder Tip) comes into play. The later crank trigger ring is only available from Ford and costs about $26, and the later timing gear is around $20. However, the early crank trigger rings seem to be floating around everywhere. In two weeks I located over fifty of them at ProFormance. That’s when it dawned on me: why bother with the later gears at all? The crank position sensor only knows air gaps, not stamped steel or PM trigger wheels.

I have an abundance of the early crank position sensor trigger wheels and I don’t have to buy the later timing gear at all if I just provide the trigger ring with the engine upon selling it and life is good.

So if you’re having this issue in your facility, go on a treasure hunt and see what you can find in the way of the early crank position sensor trigger ring. You may decide for yourself that this is something you may want to incorporate into your facility. 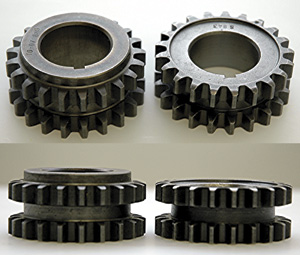