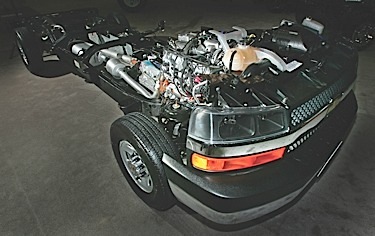 There are five ­generations of the Duramax engine. The best way to identify the generation is by the year, model and the RPO (regular production option) code.

Back in the 1990s, GM wasn’t making too many waves in the diesel truck market. The 6.2L and 6.5L engines had been around for sometime, but they were no match for the release of the Cummins 6BT in the Dodge truck in 1989 and the Ford Powerstroke in 1994.

All we remember is the GM diesel engines were a clacking bucket of bolts that were plagued by many issues from the start of the late 1970s.

GM’s goal at that time of the fuel crunch was to introduce an engine with great reliability and good fuel mileage. They weren’t interested in making power, just dependability.

By the mid-1990s, GM was definitely behind in both areas and had to find a way to compete in a growing diesel market. But by 1999, GM didn’t even offer a diesel option in any of its mid-size trucks.

Since 1976, GM and Isuzu have worked together as a joint venture on several projects. In 1996, the two automakers started working on a new mid-size diesel engine, and after two years of design, the Duramax was formed; production began in 2000.

The engine design was a 90° V8, iron block, with aluminum heads, 32 valves, common rail injection. It was ­turbocharged and intercooled and produced 300 hp and 520 ft.-lbs. of torque.

The engine was offered in GM mid-size diesel trucks at the start of 2001, and it brought GM back as a major player to the mid-size truck market by offering dependability, fuel mileage and quiet operation with plenty of power.

The question that I often hear about the Duramax is “What kind of problems do you see with these engines?”

I have to admit that these engines have a great reputation. While some problems have plagued a few of the Duramax engines, there hasn’t been anything as detrimental as what other manufacturers have had to deal with.

There are always going to be issues with anything that has to do with internal combustion. The best way to examine the Duramax would be to break down the engines by their generation and evaluate issues of each.

There are five ­generations of the Duramax engine. The best way to identify the generation is by the year, model and the RPO (regular production option) code.

The first generation is known as the LB7. This was manufactured from 2001 to 2004, with the eighth digit of the VIN designated with the number 1.

With the LB7 being the first design, the integrity of the engine was great; the biggest problem was the fuel system.

For some reason, the Bosch injectors could not sustain life in the Duramax.

The injectors would fail in three different ways — all related to the injector’s body becoming cracked.

One symptom of a cracked injector is excessive white smoke coming from the tailpipe, which is generally most noticeable at idle, especially while sitting in traffic.

The balance rates are given by the value being a plus or a minus to the volume of fuel per cylinder.

If there is too much fuel for a ­particular cylinder, the balance rates for that cylinder would be a minus. The ECU would be trying to take fuel away to correct the imbalance condition.

If there were leaking injectors in this fashion where there is white smoke, the balance rate for that cylinder would be a minus.

Advertisement
In this article:diesel, Duramax, GM