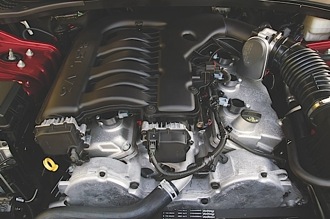 This engine, and its 2.7L, 3.2L and 4.0L cousins, represent a significant service opportunity for engine rebuilders from all the heat damaged inflicted upon them.

This engine was introduced back in 1993 as an “upgrade” from the earlier 3.3L pushrod V6 engine.

Some would question whether the move was a step forward or backward because the 3.5L V6 (and its variants) has a poor reputation for ­reliability.

Some blame the design of the engine itself for all the ills it has suffered, while ­others blame consumers for not maintaining their engines properly. But regardless of who’s at fault, these engines do represent a significant service opportunity for engine rebuilders from all the heat damaged inflicted upon them.

Engine Details
The new 3.5L engine used essentially the same cast iron block and crankshaft as the 3.3L (same 81 mm stroke), but the bore size was increased from 93 to 96 mm and the compression ratio was bumped up to 10.4:1.

The front of the block was modified to accommodate a front-mount oil pump and a timing belt drive for the overhead cams. The water pump was built into the front cover so it could be driven by the timing belt.

In 1998, the 3.5L was reworked and given an aluminum block and additional tweaks to increase the power to 253 to 255 hp, depending on the application. Unfortunately, Chrysler failed to upgrade some things that needed to be upgraded, like the undersized oil galley passages in the block, the troublesome coolant pipe that runs under the intake manifold, the undersized PCV system that doesn’t pull enough air through the crankcase and the overall reliability of the engine itself.

The 1998 to 2010 all-aluminum versions of the 3.5L SOHC V6 were used in a wide range of Chrysler models including the 300 and 300M, Avenger, Challenger, Charger, Concorde, Intrepid, Pacifica, Prowler and Sebring.

Oil Sludging Problem
One of the most common problems with these engines is that the oil tends to sludge and break down — especially if the oil is not changed every 3,000 miles.

These engines run hot, and with a PCV system that barely flows enough air to pull moisture out of the crankcase, it doesn’t take long to create an oil sludging problem.

As sludge and varnish build up inside the engine, it can restrict the small oil passages that deliver oil to the crankshaft bearings, increasing the risk of oil starvation and bearing failure.

Many of these engines have failed at relatively low mileages (less than 80,000 miles) because of spun bearings and/or broken connecting rods.

If you find evidence of maintenance neglect such as foaming or sludge on the underside of the oil filler cap, a plugged PCV system or oil that looks like tar when it drains out of the crankcase, recommend a crankcase flush to remove as much of the accumulated sludge and varnish as possible when the oil is changed.

Also, inspect and clean the PCV valve when the oil is changed, and replace the PCV valve every 30,000 miles to keep the PCV system working at peak efficiency.