Cadillac has announced a new generation of V6 engines, led by an exclusive Twin Turbo V6 that will be one of the industry’s most advanced six-cylinder gasoline engines. It leverages the latest technology to balance efficiency, performance and refinement in the upcoming, top-of-the-range CT6 luxury performance sedan. 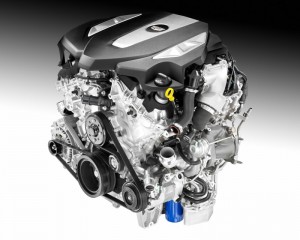 The all-new 3.0L Twin Turbo for the 2016 Cadillac CT6 is the only six-cylinder engine to combine turbocharging with cylinder deactivation and stop/start technologies to conserve fuel.

Cadillac has announced a new generation of V6 engines, led by an exclusive Twin Turbo V6 that will be one of the industry’s most advanced six-cylinder gasoline engines. It leverages the latest technology to balance efficiency, performance and refinement in the upcoming, top-of-the-range CT6 luxury performance sedan.

Peak output is estimated at 400 horsepower and 400 lb-ft of torque, making it one of the most power-dense V6 DOHC engines in the world, developing 133 horsepower per liter.

The 3.0L Twin Turbo is the only six-cylinder engine to combine turbocharging with cylinder deactivation and stop/start technologies to conserve fuel. Cadillac expects the combination to enhance fuel economy by up to an estimated 6 percent. Cylinder deactivation temporarily deactivates two of the cylinders in light-load driving conditions to enhance efficiency and seamlessly reactivates them when the driver demands full power.

With the stop/start system, the 3.0L Twin Turbo is shut down in certain driving conditions such as stop-and-go city driving to reduce fuel consumption, automatically restarting when the driver takes his or her foot off the brake pedal.

The advanced, low-inertia turbochargers enable the engine to sustain peak torque from 2,500 rpm to 5,000 rpm, giving it a broad torque curve that is conveyed to the driver through a feeling of responsive, sustained power across the entire rpm band. 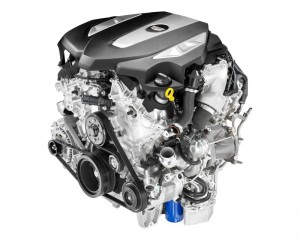 Cadillac’s new 3.0L Twin Turbo is part of a new generation of technologically advanced V6 engines, which includes a new version of the award-winning 3.6L naturally aspirated engine employed for years across the brand’s model range. Each features all-new structural and combustion elements designed to complement higher performance and greater efficiency with exceptional quietness and smoothness.

Features shared by the 3.0L Twin Turbo and 3.6L include:

While the 3.0L Twin Turbo is based on the same, all-new architecture as the naturally aspirated 3.6L V6, it incorporates specific components and features to support the load and cylinder pressure characteristics unique to a forced-induction engine.

Its 86mm bore specification is about 10 percent smaller than the 3.6L, while both engines share an 85.8mm stroke. The smaller bore reduces the size and consequentially the weight of the pistons in the 3.0L Twin Turbo, making the most of the rotating assembly’s geometry to match the quicker rev capability enabled by the low-inertia turbochargers’ quick spool-up.

Additional features unique to the 3.0L Twin Turbo include: 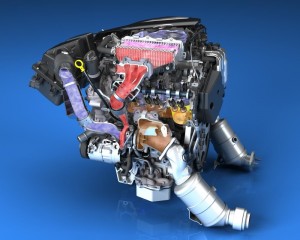 In practical terms, that means the relatively small size of the turbochargers and their lightweight turbines foster more immediate “spooling,” which practically eliminates lag, for an immediate feeling of power delivery. They produce up to 18 pounds of boost (125 kPa).

A single, centrally located throttle body atop the engine controls the air charge from both turbochargers after the temperature is reduced in the intercooler. This efficient design also contributes to more immediate torque response, while reducing complexity by eliminating the need for a pair of throttle bodies.

Unique vacuum-actuated wastegates – one per turbocharger – are used with the Twin Turbo for better management of the engine’s boost pressure and subsequent torque response for smoother, more consistent performance. They are independently controlled on each engine bank to balance the compressors’ output to achieve more precise boost pressure response.

The wastegates also work in concert with vacuum-actuated recirculation valves to eliminate co-surge from the turbos – a condition that can result in dynamic flow reversal, such as the moment immediately after the throttle closes. This overall system integration contributes to the engine’s smoother, more consistent feeling of performance.

With no circuitous heat-exchanger tubing, there is essentially no lag with the response of the turbochargers. Airflow routing volume is reduced by 60 percent when compared with a conventional design that features a remotely mounted heat exchanger.

Both of Cadillac’s new V6 engines will be produced at GM’s Romulus Powertrain Operations assembly facility, near Detroit, which received a $540-million investment to build the next-generation V6 engines.

Advertisement
In this article:Cadillac, engines, Next-Gen