Changing the length of the rods with respect to the stroke of the crankshaft offers some advantages in certain situations. 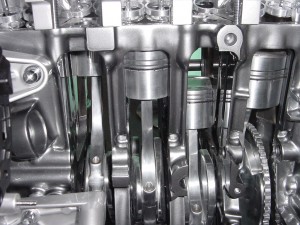 The relationship between bore and stroke impacts the RPM range where an engine develops peak torque and horsepower.

Performance engine builders are always looking at changes they can make that will give their engine an edge over the competition. Rod ratio is one of those factors that may make a difference. Changing the length of the rods with respect to the stroke of the crankshaft offers some advantages in certain situations, and may allow the same number of cubic inches to deliver a little more power or a little longer ring life (take your pick). But experts disagree as to whether or not changing rod ratios really makes that much difference.

Rod ratio is the mathematical relationship between the overall length of the connecting rods and the stroke of the crankshaft. Divide rod length by the crank stroke and you get the rod ratio. For example, say you’re building a stock small block 350 Chevy with 5.7-inch rods and a 3.48 inch stroke. The rod ratio in this engine would be 5.7 (rod length) divided by 3.48 (stroke), which equals 1.64.

What do these numbers mean? They express a geometric relationship between the rods, crankshaft and pistons. The lower the rod ratio, the greater the side forces exerted by the pistons against the cylinder walls. This increases wear on the piston skirts and cylinder walls, and creates a higher level of vibration inside the engine. The increase in friction can also elevate coolant and oil temperatures.

On the other hand, lower rod ratios do have some advantages. Shorter rods mean the overall height of the block can be shorter, which means the overall weight of the block can be lighter. The engine will typically pull more vacuum at low RPM, which means better throttle response and low end torque (good for street performance and everyday driving). Spark timing can be advanced a few degrees for some additional low speed torque, and the engine is less prone to detonation, which can be a plus in turbocharged, supercharged or nitrous applications. 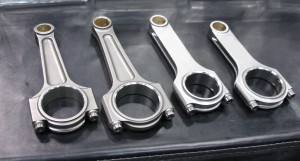 Connecting rods come in various styles and lengths. Choosing the one that’s “right” for a given application depends more on strength, loading and RPM than rod ratio.

What about longer rod ratios? Using longer connecting rods with the same stroke reduces the side loading on the pistons, which reduces friction. It also increases the piston dwell time at Top Dead Center. Holding compression for maybe half a degree of crankshaft rotation longer at TDC improves combustion efficiency and squeezes a little more power out of the air / fuel mixture. Typically, an engine with a higher rod ratio will produce a little more power from mid-range to peak RPM.

Longer rods require the wrist pin to be located higher in the piston, or the engine has to have a taller deck height to accommodate longer rods. Longer rods also mean shorter and lighter pistons can be used, so the additional weight of the rods is more or less offset by the reduced weight of the pistons.

One of the disadvantages of longer rods and a higher rod ratio is that low RPM intake vacuum is reduced somewhat. Reduced air velocity into the engine hurts low speed throttle response and torque, which is not good for everyday driving or street performance, but works well on a high-revving race engine.

Some engine builders say a “good” rod ratio is anything 1.55 or higher. Production engines may have rod ratios that range from 1.4 to over 2.0, with many falling in the 1.6 to 1.8 range. Four cylinders tend to have lower rod ratios (1.5 to 1.7 range) while many V6s have somewhat higher rod ratios of 1.7 to 1.8. As for V8s, they typically range from 1.7 to 1.9. Often, the rod ratio is dictated by the design and deck height of the block, and the pistons, rods and crank that are available to fit the block.

Essentially, there is no “best” rod ratio for any given engine. Some say to use the longest rods that will fit the engine to make the most mid-range and peak RPM power while others say it doesn’t really matter. Smokey Yunick was one of the early proponents of long rods, and they worked well for him in NASCAR. Even so, some engines that have lower rod ratios will out-perform engines of the same displacement that have higher rod ratios. How can this be? Because of differences in the design and porting of the cylinder heads, different valve sizes and valve angles, different camshaft lift and duration, different intake systems and different tuning.

For example, a BMW M3 has a rod ratio of 1.48, which doesn’t sound very good based on the number alone. But the M3 engine also makes 2.4 horsepower per cubic inch (with the help of a turbo), which is nearly twice the power ratio of a typical street performance Chevy 350 or small block Ford. The point here is not that turbos make lots of power (they do), but that rod ratios don’t really affect performance one way or the other very much.

Some people put way too much emphasis on rod ratios and worry excessively about how their engine’s rod ratio will affect performance. Our take on the issue is that rod ratio is just a number that may or may not make much difference depending on the situation. In some cases, it can make a slight difference and in others it seems to make no significant difference whatsoever. Peak horsepower and torque depend on too many other variables.

The maximum achievable rod ratio is always going to be limited by the physical dimensions of the block (deck height, tall or short), the longest rods that are available to fit the engine (off-the-shelf mass produced rods or custom made), and the shortest pistons that will work with the rod, block and stroke combination. The combined weight of the rod and piston has more effect on momentum and throttle response than the rod ratio. Also, moving the wrist pin higher up in the piston and using a shorter piston may create some piston wobble and instability issues if you go too far. Because of this, excessive rod ratio may actually be detrimental to engine performance. 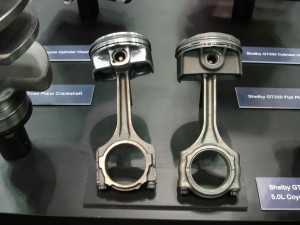 A closely related topic to rod ratio is that of bore and stroke. If the bore and stroke dimensions in an engine are the same (say a 4.00 inch bore with a 4.00 inch stroke), the engine is said to be “square.” If the bores are larger than the stroke, the engine is “oversquare,” and if the stroke is longer than the bore diameter it is said to be “undersquare.”

6,600 RPM (due to hydraulic lifters). Both are excellent engines with lots of performance potential, but the Ford revs higher because of its overhead cam heads, and makes more horsepower (526 vs 460).

As with rod ratios, the geometric relationship between bore and stroke can also affect an engine’s power and RPM potential. Even so, such generalities often don’t hold true across the spectrum of production engines or engines that are purpose-built for racing.

Formula 1 engines have an extremely short stroke, only 1.566 inches. The bore size is limited to a maximum of 3.858 inches. This is a very oversquare design, but one that allows these engines to rev to an incredible 20,000 RPM and squeeze 800 horsepower out of 2.4 liters of displacement! One of the reasons they are able to rev so high is the extremely short stroke. The pistons are not moving up and down very far in their bores. The stroke/bore ratio is only 0.4, which is less than half that of a typical passenger car engine. At 20,000 RPM, the relative piston speed in a Formula 1 engine is 5,248 feet per minute. Formula 1 engines also use a pneumatic valve system that is far faster than any mechanical valvetrain.

A 500 cubic inch Pro Stock drag motor may be running a bore size of 4.750 inches with a crank stroke of 3.52 inches. At 10,000 RPM, the piston speed in one of these motors is about the same as a NASCAR engine. If they are running a smaller bore with a longer crank (say 3.75 inches), pistons speeds may be as high as 6,250 feet per minute.

High piston speeds not only increase friction and ring wear inside the engine, it also increases loads on the connecting rods dramatically. Using longer rods with shorter, lighter pistons can help reduce the stress on the rods in these applications.

Determining the best rod ratio and bore/stroke combination for a Pro Stock motor depends a lot on the breathing characteristics of the cylinder heads, intake runners and plenum. Some say shorter rods work best with heads and intake systems that can flow big CFM numbers. Longer rods are better for heads and intake systems that don’t flow as well. The rod ratios that seem to work best in Pro Stock drag racing years ago was around 1.8, but today it’s more in the 1.70 to 1.65 range according to some sources.

There is no magic formula for building a race-winning engine. Rod ratios and stroke/bore ratios can vary quite a bit. Rules that limit maximum engine displacement in certain classes may also restrict maximum bore diameter and stroke length, but within those rules is often some leeway to experiment with different combinations – and that’s the real secret to finding the right combination of parts that will create a truly competitive engine.

Shop Solutions February 2021
Connect with us