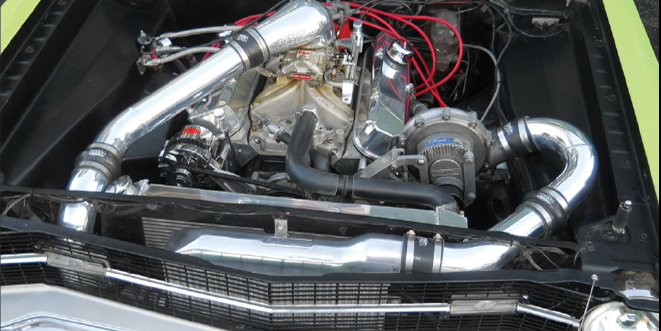 Engines produce lots of heat, and the more horsepower they make the more heat they generate. Only about 35 to 40 percent of the heat energy released during combustion in a gasoline engine performs useful work by creating pressure that pushes the pistons down their bores. Diesels are a little better at 40 to 45 percent efficiency thanks to a higher compression ratio and reduced pumping losses (no throttle restriction). Even so, all internal combustion engines waste more heat than they put to good use. 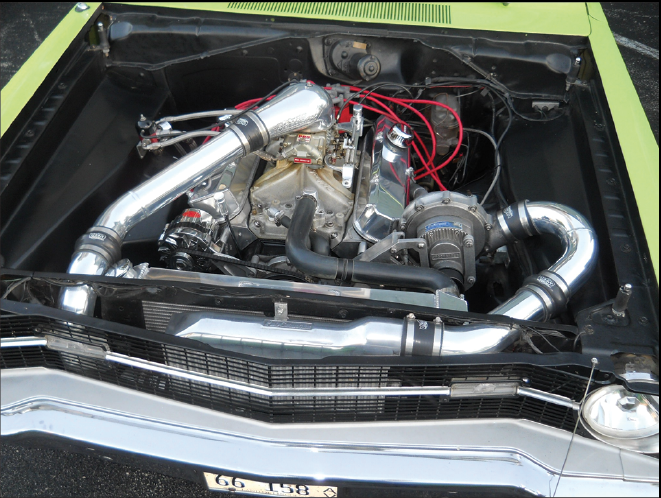 Engines produce lots of heat, and the more horsepower they make the more heat they generate. Only about 35 to 40 percent of the heat energy released during combustion in a gasoline engine performs useful work by creating pressure that pushes the pistons down their bores. Diesels are a little better at 40 to 45 percent efficiency thanks to a higher compression ratio and reduced pumping losses (no throttle restriction). Even so, all internal combustion engines waste more heat than they put to good use.

About half of the waste heat goes out the tailpipe with the exhaust. Adding a turbocharger can recover some of this wasted energy to compress the incoming air charge. But in a naturally aspirated engine, all the heat energy in the exhaust is just gone with the wind.

The other half of the heat energy that’s wasted is absorbed by the block, heads and cooling system. Keeping the coolant circulating through the engine prevents it from overheating, scuffing the pistons, galling the valve guides or literally melting down. If an engine has no cooling system, like a drag car with a solid billet block, the time the engine can safely run before it gets too hot is very limited.

How much heat does an engine actually generate? It depends on the engine’s displacement, how much air it flows, breathing efficiency, whether it is naturally aspirated or boosted, engine RPM, load and the type of fuel. Obviously, a big stroker motor with 500 to 850 or more cubic inches or a blown or turbocharged engine running lots of boost will produce far more heat and power than your typical passenger car or light truck engine.

One gallon of pump gas releases about 114,000 to 125,000 BTUs (British Thermal Units) of heat energy when it is burned. The actual heat content will vary depending on the blend of hydrocarbons in the fuel and whether or not it contains ethanol (and how much).

It takes about 2,500 BTUs of heat energy to produce one horsepower (this includes the heat loss out the tailpipe and that absorbed by the cooling system). Based on these numbers, a 300 horsepower engine would generate about 750,000 BTUs of heat energy per hour at full throttle. A 400 horsepower engine would burn over a million BTUs per hour with the pedal to the metal. As the power level goes up, so does the waste heat produced by the motor.

This leads us to the important part of this article, which is this: When you modify an engine to make more horsepower, you also increase the heat load on the cooling system.

For every 100 horsepower increase in power output, the engine burns another 250,000 BTUs – and nearly a third of this is dumped into the cooling system.

Most stock cooling systems have minimal capacity to handle higher than normal heat loads – especially when the heat load is sustained for a period of time rather than a momentary surge.

If an otherwise stock small block or big block Chevy, Ford or Chrysler engine is replaced with a 500 to 600-plus cid stroker motor, or its equipped with some type of power adder, the heat load on the cooling system may be as much as 50 percent higher than before. This can overwhelm the cooling system’s ability to keep up. Sooner or later the engine will run hot and overheat. The risk goes up with the ambient air temperature. An engine may maintain normal temperature on a relatively cool or mild day, but overheat when the outside temperature rises to 80 or 90 degrees F.

For every 100 horsepower that’s added to an engine, heat output goes up another 250,000 BTUs – and nearly a third of this will end up as waste heat dumped into the block, heads and cooling system. 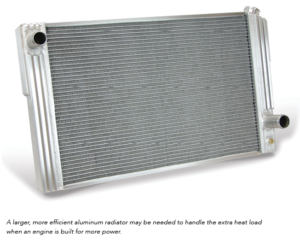 USE A BETTER COOLANT

The cooling system manages heat by absorbing heat inside the engine and routing it to the radiator so it can dissipate into air flowing through the radiator.  Water is the most efficient coolant because it can soak up and transport almost twice as much waste heat as straight ethylene glycol antifreeze, or about 20 percent more than a 50/50 mixture of water and antifreeze.

Plain water is great for a race application, and may be required at tracks and drag strips that do not allow antifreeze. Plain water will also run about 10 degrees cooler than a 50/50 mix of antifreeze and water.

Switching from a 50/50 mix of water and antifreeze to a 60/40 or 70/30 mix can improve the efficiency of the cooling system 5 to 10 percent if minor overheating is a problem with a modified motor. Increasing the water content in the coolant increases the coolant’s ability to absorb and transfer heat more efficiently.

Why not run straight antifreeze? Ethylene glycol boils at 365 degrees, which is over a 150 degrees higher than straight water or 100 degrees higher than a 50/50 mix. But as we said earlier, ethylene glycol does not carry heat as efficiently as water. So although a straight antifreeze coolant would probably never boil over, it also would not carry as much heat away from the engine (about 50 percent less), which would greatly increase the risk of overheating.

There are also coolant additives for plain water. Additives act as “wetting agents” reducing the surface tension of water so it will conduct heat more efficiency between the cooling jackets, radiator and coolant. Some of these products claim temperature reductions of 20 to 30 degrees F or more. They can also be used with 50/50, 60/40 or 70/30 water/antifreeze mixtures, but will be less effective than with plain water. The additives may also contain corrosion inhibitors and lubricants for the water pump, too.

On older street vehicles with a belt-driven fan, the fan doesn’t pull much air at idle or low speed. Even at highway speeds, the fan may not cool well if it lacks proper shrouding. The fan needs to be in close proximity to the radiator, and/or surrounded by a shroud so all the air the fan pulls will be routed through the radiator.

A thermostatically-controlled viscous fan clutch is used on many older vehicles with mechanical fans to engage and disengage the fan as operating conditions change. Typically, the fan is disengaged at highway speeds to reduce noise and the parasitic drag on the engine. The clutch may also engage the fan if it senses things are getting too hot. The problems with these clutches is that after 50,000 to 80,000 miles, they may be slipping too much and not allowing the fan to cool at maximum efficiency. Replacing the fan clutch with a new clutch, or getting rid of it altogether may be a good idea to reduce overheating. Also, replacing a stock four-blade metal fan with a multi-blade fan or a flexible fan allows the fan to move a greater volume of air for better cooling.

Installing an electric fan will require a temperature switch and relay to turn on the fan when it is needed. A manual fan switch is also helpful so the driver can activate the fan if the temperature gauge starts to climb too high.

It’s also important to make sure most or all of the air that passes through the grille opening in the vehicle also flows through the radiator and not around it. Additional ducting can help maximize ram airflow when the vehicle is moving to lessen the cooling load on the fan.

Another change that can be made to improve cooling is to overdrive the water pump with a slightly smaller diameter pulley. Spinning the pump faster will increase coolant flow and cooling – up to a point.

Replacing a stock water pump that has a stamped steel impeller with one that has a molded or CNC-machined impeller is another upgrade that can also improve coolant flow by reducing cavitation and turbulence inside the pump.

An option for many race applications is to replace the belt-driven water pump with an electric water pump (or to add a supplemental electric pump for times when extra coolant circulation is needed). Getting rid of a belt-driven water pump eliminates another parasitic power drain on the engine and can save maybe 10 to 25 horsepower or more. The pump can also be switched on when the engine is off to bring the temperature down quickly between races. 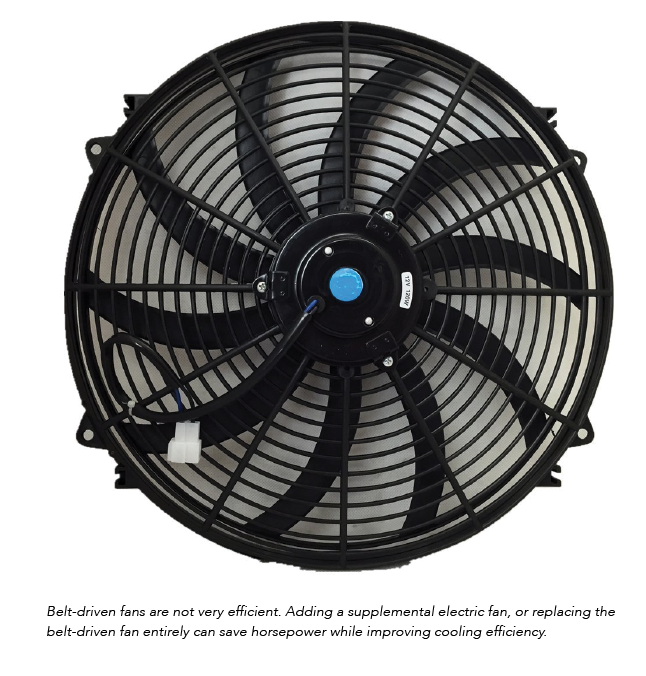 Upgrading the radiator may also be necessary if the stock radiator is not up to the task. Increasing the width, height and/or thickness of the radiator can increase the surface area of the heat exchanger. More tubes and fins mean better heat transfer between the coolant inside the radiator and the air passing through it.

Increasing the operating pressure of the cooling system with a higher pressure radiator cap can also reduce the risk of overheating by raising the boiling temperature of the coolant. This really helps with plain water or 70/30 mixtures of water and antifreeze. Every 1 PSI increase in the pressure of the cap raises the boiling temperature of the coolant 3 degrees F. If the system is strong enough to handle it, go with a 20 PSI radiator cap. Just remember, that the high pressure cap likely will require a stronger aluminum radiator, a good heater core and good hoses.

EFFECTS OF CHANGING THE
OPERATING TEMPERATURE

One of the advantages of lower operating temperature is that it reduces the risk of detonation, which means you can get by with a little less octane in the fuel and/or take advantage of a slightly higher compression ratio for more power.

A cooler engine also allows a denser air/fuel mixture into the cylinders for more power. But if the temperature is too low or the engine is run without a thermostat, it can be very “cold blooded” and idle poorly, hesitate and stumble until it warms up. Too low of an operating temperature can also increase clearances between the pistons, rings and cylinders, increasing blowby and washing oil off the cylinder walls. 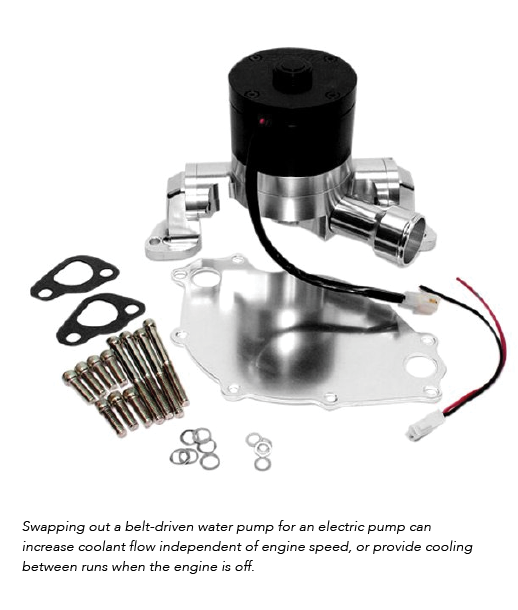 OTHER WAYS TO MANAGE HEAT

Oil also acts as a coolant inside an engine, drawing heat away from the pistons and bearings. Any changes that improve oil cooling can help lessen the heat load on the cooling system.

A simple and easy-to-install upgrade is to add an external oil cooler to a wet sump lubrication system. Increasing the oil capacity of the oil pan also helps as does adding a thermal dispersant coating to the outside of the oil pan and valve covers.

Adding piston oilers is another modification that can not only help reduce detonation, but also improve piston cooling reducing the risk of piston seizure if things get too hot. Having the piston side skirts coated with an anti-friction coating can provide additional insurance against scuffing if the engine runs hot.

There’s no way to extract useful work from the waste heat that goes out the tailpipe in a naturally aspirated engine. Even so, heat that would otherwise be reflected back toward the engine can be extracted more efficiently if the exhaust manifolds or headers are given a thermal insulating coating. Keeping heat in the pipes increases exhaust velocity for better breathing and scavenging, and it helps the heat get away from the engine more quickly to reduce the engine’s overall heat retention. 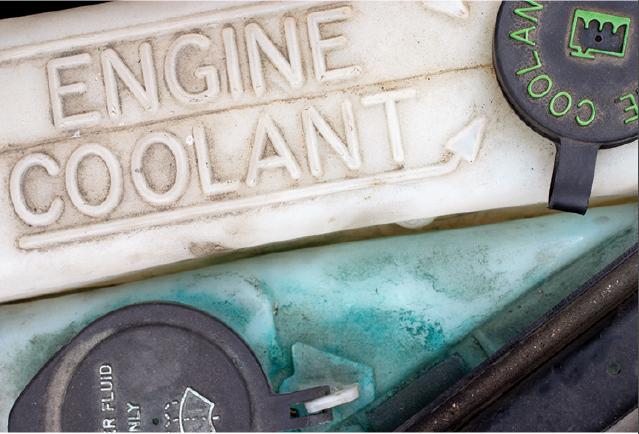