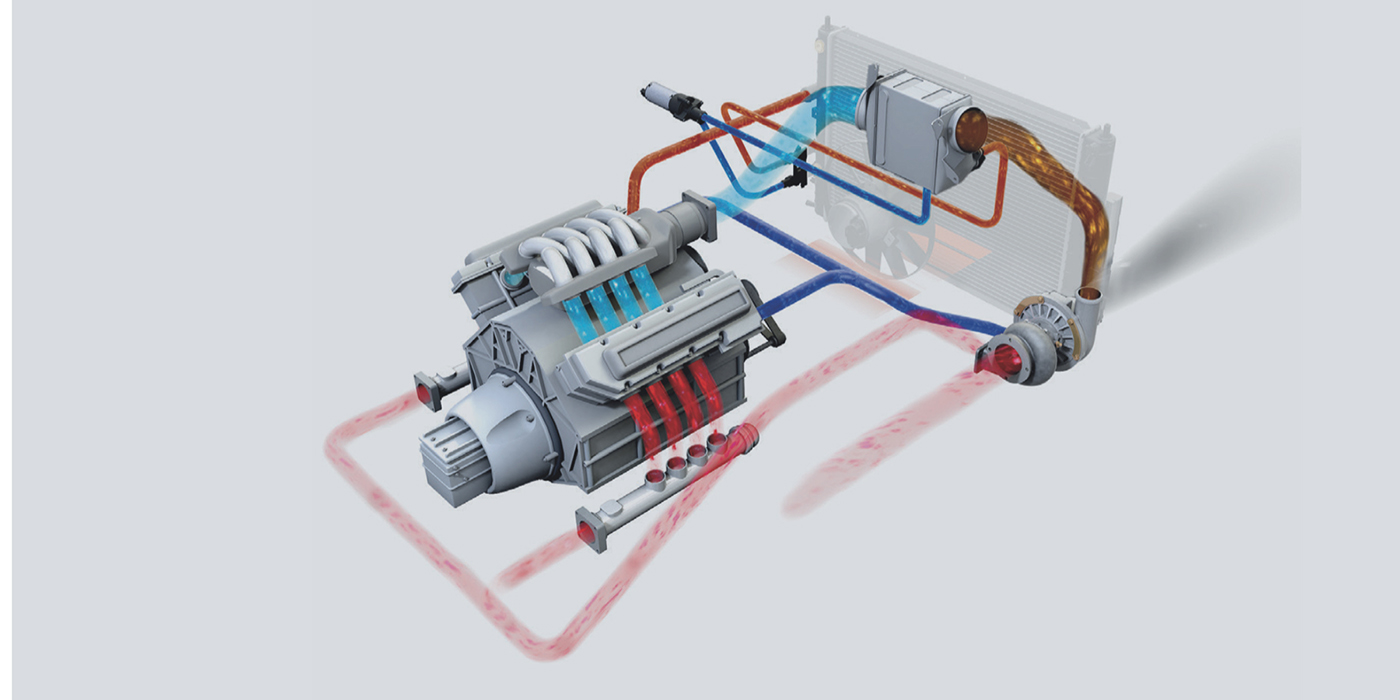 As automotive manufacturers look for every way to improve engine performance and reduce emissions, they are taking a closer look at how the cooling system can manage temperature while using less engine power.

As automotive manufacturers look for more advanced methods to achieve high fuel economy along with low emissions, the role of thermal management in engines has come to the forefront.

In the past, “thermal management” only meant getting the engine’s internal components to their optimum temperature as quickly as possible and preventing overheating. Today, thermal management has taken on a much more critical role of maintaining temperatures within a narrow range and has expanded to include the intake air and other related areas like direct and indirect charge air, fuel and exhaust gas recirculation (EGR).

Our MAHLE Behr division is one of the leading producers of coolant pumps, thermostats, and technologically sophisticated thermal management products, so we play a role in helping engine builders understand how the interplay of these thermal management systems impacts the mechanical systems within the engine. In this article, we will review the cooling system and discuss how controls have evolved with the introduction of microprocessors and computers, and then look at ancillary thermal management devices that are being used to affect engine performance.

Without cooling, the temperatures generated during fuel combustion (over 3,500 degrees Fahrenheit) can be detrimental to the operation of an internal combustion engine (ICE). The first automotive engines were cooled using the principle of thermosiphon, where the heated, lighter water rises through a manifold into the upper part of the radiator. As the water flows, it is cooled by the airstream and, since it gets heavier, sinks to the bottom of the radiator and then flows back to the engine. This circuit remains in operation as long as the engine is running.

As engine technology advanced, a water pump was added to improve coolant flow. By the 1920s, a thermostat was introduced to “warm up the engine quickly and prevent it from cooling down,” as described in period literature.

Exhaust gas recirculation (EGR) coolers take some of the primary exhaust gas flow between the exhaust manifold and the turbocharger, cool it in a special heat exchanger (EGR cooler), and then feed it back into the intake air. This decreases the combustion temperature in the engine, reducing the formation of nitrogen oxides.

As automotive manufacturers look for every way to improve engine performance and reduce emissions, they are taking a closer look at how the cooling system can manage temperature while using less engine power. Traditional mechanical coolant pumps, which are driven directly by the engine, continuously deliver coolant while the engine is running, even when there is no need for cooling. In contrast, electric coolant pumps and their integrated electronic control are variably activated according to the required cooling performance.

During a cold start, an electric coolant pump initially pumps no coolant. This allows the engine to reach its operating temperature faster. Even when idling or after turning off the engine, an electric coolant pump can deliver sufficient cooling capacity since it is not crankshaft-driven. This demand-driven cooling of the engine lowers the power requirement, reducing friction losses, fuel consumption, and emissions.

However, if we can control the coolant temperatures based on demand, why not look at all the areas in an ICE’s operation where temperature plays a role? When the engine is cold and when there are low ambient temperatures, the engine and catalytic converter can reach optimal operating temperature quicker by eliminating charge air cooling on turbocharged engines. This results in lower cold-start emissions, mainly hydrocarbons (HC).

With a charge air cooler using forced air, this is only possible using a bypass on the charge air side, which can be complicated. With charge air cooling using a coolant, simple control of the coolant volume flow rate not only allows the cooling of the charge air to be suspended, but also makes it possible to regulate its temperature.

In passenger cars, the rising demand for cooling performance conflicts with the increasingly restricted installation space in the vehicle’s engine area. The conflict between installation space and power requirements can be resolved with two new approaches – charge air precooling and indirect charge air cooling.

One way of resolving the dilemma between installation space and power requirements is the use of indirect charge air cooling. In the passenger car, this generally consists of a complete coolant circuit for the charge air cooler that is independent of the engine cooling circuit.

As an engine builder in today’s microprocessor-controlled world, it is not enough to know the mechanical nuances of automotive power plants. The quest for ever-stringent fuel economy and emissions standards means that every aspect of engine operation is controlled within tight parameters. The use of active thermal management systems to control the temperature of charge intake air is becoming more commonplace and more sophisticated. To ensure the proper operation of a modern rebuilt engine, working knowledge of these ATM systems is essential. EB

Dan Harris is a business development manager for MAHLE Aftermarket Inc., responsible for thermal management products. In this role he is responsible for all aspects of marketing the MAHLE Behr product lines.

Motorcycle & Powersports Opportunities
Connect with us