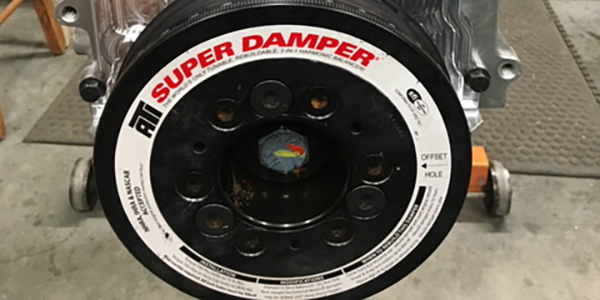 Although harmonic balancers are not musical instruments, they do control resonance inside the engine, which is music in some circles. There are three types of engine vibration that engine builders try to minimize. And each type of vibration has a different way of controlling it.

The Beach Boys may have been feeling all kinds of “Good Vibrations” when they wrote their iconic song, but for engine builders, vibrations generally lead to wear and failure. Vibrations break parts, rob power and cause other unwanted consequences that not even Brian Wilson couldn’t fix without some extra help.

Although harmonic balancers are not musical instruments, they do control resonance inside the engine, which is music in some circles. There are three types of engine vibration that engine builders try to minimize. And each type of vibration has a different way of controlling it.

Unbalanced vibration is what comes to mind first, according to Brian LeBarron of Vibratech TVD and Fluidampr. “It is a weight imbalance vibration that occurs once per revolution that feels like the constant thumping when you lose a wheel weight.”

In regard to an engine, LeBarron says even distribution of the rotating assembly weight prevents this. “Balancing the engine by precision matching the pistons, connecting rods and crankshaft counterweights will minimize an unbalanced vibration.”

Axial vibration is a type of vibration that involves the forward and backward movement of the crankshaft.  The main bearing support plate and thrust bearings are in place to prevent this movement.

The third type of vibration is Torsional, which is the end-to-end twisting and rebounding of the crankshaft caused by combustion. “The harmonic balancer (damper) controls the twist to achieve durability and efficiency,” says LeBarron, who notes that not all dampers are constructed or function the same.

“A dampener is like a rubber motor mount,” says Tom Lieb, founder and CEO of Scat Enterprises. “In other words, if you bolted your engine directly to your chassis, you know, your radio would have funny tunes. You’ll feel a lot of weird vibrations. Everything inside the engine causes it to move around because you’re taking rotating mass and reciprocating mass and joining them together to go out to the rear wheels. And, because you’re doing that, you’re combining different motions, and then you’re putting an explosion in the middle to make all this turnaround.”

LeBarron says that an engine builder should consider an upgrade to an aftermarket damper/balancer whenever the engine is modified beyond stock. “Increasing torque causes the stock tuned elastomer damper to work harder. Routinely inspect the stock damper for cracking, bulging or missing rubber. Then upgrade to a performance damper if any of these are found.”

Changes to the rotating assembly effect where in the rpm range the worst vibration occurs. “The stock tuned elastomer damper will still function, just not where it will provide the best protection,” LeBarron explains. “Fluidampr is a broad range damper. It does not require tuning or maintenance. An internal inertia ring shears through viscous silicone to properly control torsional vibration across the rpm range.”

Lieb explains that when OEMs design a new engine (Scat has been involved in dozens and dozens of these programs over the years), engineering has been dictated to by marketing, and in the process, an engine is designed to the best of their ability. “Engineering builds 10 or 15 prototypes and puts them on the dyno to test for horsepower, torque and so on. One of the things they test for is vibration. And whenever they run the engines, they put a Torsiograph on the nose of the crankshaft, which measures torsional vibration.”

A Torsiograph is like an EKG that gives the amplitudes of how much the crank is wiggling, says Lieb. “It’s like an EKG in that every time your heart goes swish-swish, it produces a little blurb and tells the doctor that another push and you’re dead. So, the OEMs evaluate the Torsiograph and they’ll change the weight of the piston and the rod, and they’ll change valve timing, compression ratio by changing the length of the rod.”

“The important thing for us is to know what a customer’s doing,” Lieb reveals. “You tell us what we’re planning to do and we can figure out what crank you need instead of buying a crank that maybe wouldn’t fit that application and trying to make up for it by adding some kind of balancer or damper to correct an internal problem by bolting something on the end.”

You gotta go to the source. Many builders try to compensate for bad balance with a damper or because they’re running at a higher rpm. But it doesn’t matter if you’re not balanced. Lieb says there are some inherent flaws with using a damper of any kind if it’s for the wrong application.

“If you have a fluid style balancer, the amount of rubber that is between the hub and the inertia ring is about a third of what you get in an elastomer damper,” Lieb notes. “The directions say that you cannot balance with the damper on the crank. You’re supposed to balance the crank, rods and flywheel, and all that stuff, bolt the engine together and then put the damper on and it will balance itself. Well, my retort to that is that most racers do not balance their wheels with the tire flat.”

Lieb gives the damper its dues, explaining that it will settle down at constant rpm. “They’re used all the time for highway trucks with 17 speeds that drive within a 500-rpm range for 10 hours a day. Or a generator set that runs at 1,700 rpm generating electricity because the lights are out in the hospital – they work for these kinds of applications. In a race application, they are a disaster because they’re going up and down the rpm range. They can’t react to the change in rpm.”

Lieb refers back to elastomer damper being like rubber motor mounts. “It just sits there and vibrates. And because it’s doing that, the inertia ring controls that vibration and it’s constant. And so, as it wiggles, the inertia ring wiggles with it because it’s already wiggling. The amplitude goes up and down and it reacts immediately because it’s connected the crank and already moving. It doesn’t have to go from, from stop to someplace and then reverse itself, it’s moving all the time. It’s not reacting. It is participating rather than reacting.”

The OEM style balancers are designed to smooth out harmonics at a specific rpm, but the minute an engine builder goes in and changes to a different crank, stroke or whatever, that OEM balancer is no longer going to work. You would need an elastomer damper, according to balancer manufacturers. Or you need a crank with the proper balance for what you’re building, according to crankshaft manufacturers. There are two schools of thought about the best solution, but each engine builder needs to decide what works best for your customer and application. And the Beach Boys will always have Good Vibrations playing on the radio.

A torsional vibration damper provides durability by controlling destructive torsional vibration. A side benefit to vibration control is releasing lost torque and horsepower through greater efficiency. A performance damper is constructed from three main components: