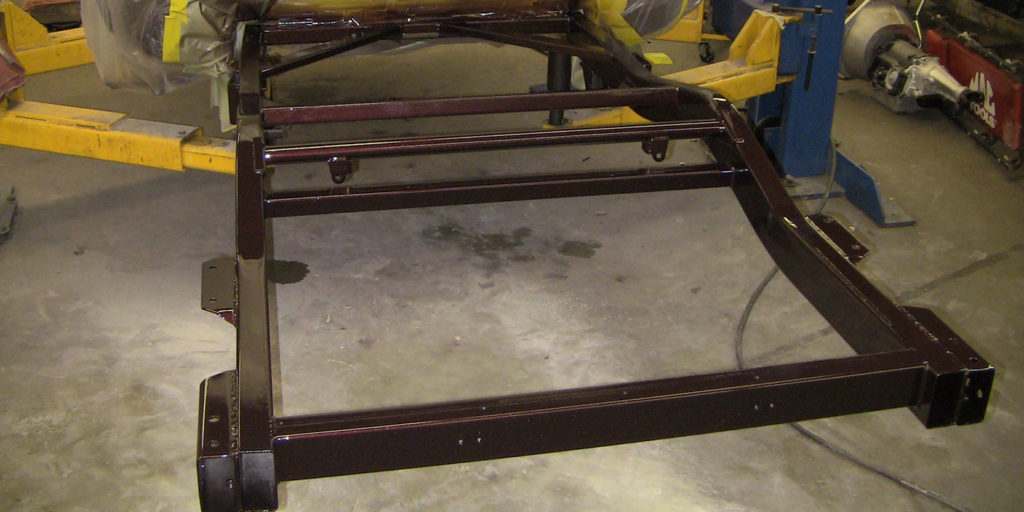 My first car had an in-line six, so I never thought of it as a performance car. My second, however, had 350 cubic inches of raw mid-‘70s…well…nothing, but how was I to know? I figured if it had a 350 it must be powerful. It also had leaf springs, so the first thing I did was run out and buy some super-long shackles and bright yellow traction bars. I don’t think that 145-horse 350 could have twisted a piece of mechanics wire, much less a leaf spring, but hey, I thought it looked cool.

I guess I must have built too many models as a kid; that’s evidently where I learned my chassis-building skills. Attempting to learn performance by trial and error was a downward slide until asking relentless questions at the local speed shop finally turned things around. Chassis improvements, however, were still not a major topic, but luckily that has all changed.

When building or restoring a car today, it’s usually an expectation that the braking and handling of the car will be improved upon, and it’s easier than ever. With the widespread availability of components and kits, even with no prior chassis experience, a respectable street machine can be built.

The options start with bolt-on parts to improve on an original chassis, followed by complete suspension and brake kits as the next step up, all the way to a complete frame and suspension. This can all be bought and sent to your door for a good majority of the old vehicles on the road. The one-at-a-time custom chassis builder then holds the spot for racing and one-off designs when you’re building something truly unique.

Pick a Car, Any Car

It’s almost that easy. What’s the make? What’s the model? What decade is it from – the ‘30s, ‘40s, ‘70s or ‘80s? Car, truck, street rod, muscle car? if you ask you will receive. Practically any component from bushings to springs to control arms and brakes are just waiting for somebody’s next project.

When you build an engine, you naturally work within someone’s budget, but there’s a certain point where a few extra bucks are worth the benefits. That’s the case with a lot of chassis work. Think of it like this: New car suspension is fairly easy to work on. Most everything has struts. A few bolts and it’s out. On an older car, it always takes longer.

For example, on a traditional upper-lower A-arm setup, by the time you get the steering knuckle off, get the coil spring out, then fight with the bolts that are frozen in the A-arm bushing sleeves and the bolts that break off in the cross-shafts, you have two choices. One, keep fighting with all that old stuff, press in new control arm bushings, ball joints and cross-shafts on rusty A-arms while refinishing them in between, all the while watching the labor cost keep ringing up. Or, buy completely assembled new control arms that are lighter weight, stronger and have a nice powder-coated finish. Bolt them in and go.

When you look at what’s available, it’s surprising how much is out there and the reasonable cost for which it can be had. If you ask your customer, they will most likely be happy to pay the price for new and improved chassis components, rather than pay you to refurbish their old stuff, and still have old stuff.

Complete suspension setups, front or rear, and complete braking kits are made for just about any machine you can name. American iron from the ‘60s is a given, but throw in some unusual makes like Studebaker, Willys, Anglia or a Ford Model A, and what can you get? How about a complete front suspension with disc brakes, coil overs and rack and pinion steering, as well as options for ride height.

Be sure to check out what’s available for the project you’re on and don’t settle for stock. You’re building an engine and you want your customer to run it… give them incentive. If their car doesn’t handle or brake well, they’ll just be scared of it.

If your customer is looking for the ultimate, consider a complete chassis. These setups are really cool and made for an amazing number of vehicles. The frames are built stronger and stiffer to increase torsional rigidity, ultimately getting more power to the ground and providing better handling.

Extensive design goes into modern frames so they can tuck up under the body as much as possible, allowing for increased ground clearance, which results in you being able to set the car up with a lower stance. A lower stance equals lower center of gravity…you get the picture.

On top of that, the suspension systems are designed to offer improve alignment angles for drastic handling improvements, and rack and pinion steering is incorporated into most of these so you can get rid of that sloppy, heavy, old gear box.

There’s obviously a major swing in cost between a few improved components and a complete chassis, but it all comes down to what your customer is looking for. You used to have to buy a Corvette to get something that handled like a Corvette. Now it doesn’t matter what you build, car or truck. They can all be a wolf in sheep’s clothing.

It’s amazing how many things have changed in the last 30 years. It’s the best time to build, restore or modify a car. It’s fun to look back at the old stuff and see a nostalgic build with traction bars. They did their job for what we had at the time. But now we have better, and it’s simply the way to go. EB