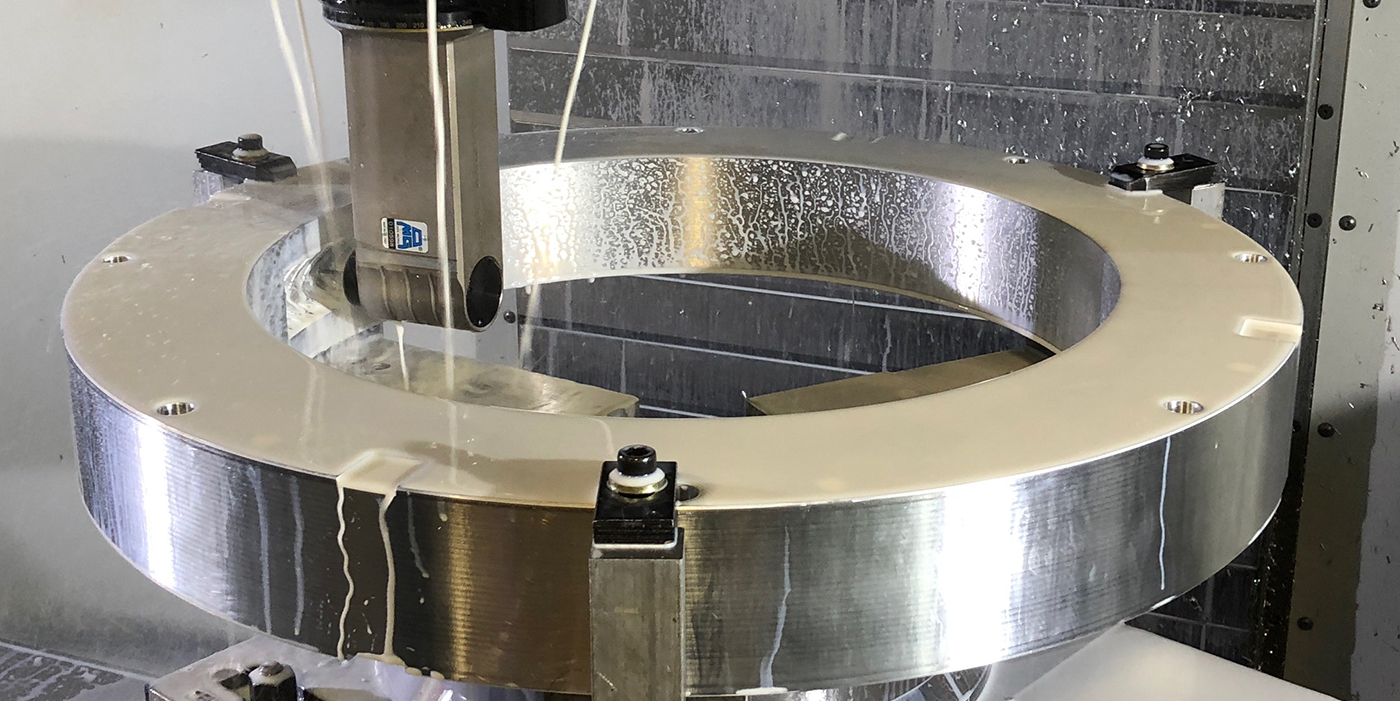 Modern CNC equipment and machining systems are capable of doing work on anything you can run a program for. Some shops have started to find additional uses for these machines.

Today’s engine shops and machine shops are increasingly adding more and more modern CNC equipment and other machining systems and centers capable of doing work on anything you can run a program for. While a majority of shops stick with what they know – engines and engine components – some shops have started to find additional uses for these machines to keep them busy and bring some extra money into their businesses.

We caught up with John DeBates of Auto Machine Inc. located in St. Charles, IL to find out what got his shop into machining parts for industries other than automotive, and in the case that it still was automotive related, what he was making that was out of the norm.

Auto Machine has been in business for over 45 years and carries a well-known reputation for all kinds of different engine work. However, it was just five years ago that John and the shop began investigating other uses for their CNC machines.

“I’ve built stuff, especially on my CNC equipment, for industries outside of engine building and automotive,” DeBates says. “I also have a very, very good welder now and he welds a lot of thermal forming molds. When they manufacture those, they may make a mistake and he’ll weld it back up so they can re-machine it or something happens during manufacturing like a bolt falls out of the machine and gets in the mold. We’ll do stuff like that.”

The first time Auto Machine got machine work for something other than engine building, it was for a manufacturer that builds street sweepers. The job came through a mutual friend who’s an engineer for the street sweeper company.

“He came to us one day and said they were having a problem getting a prototype done,” DeBates says. “My CNC programmer and my in-house engineer looked at it and said we could help out and make those. It was a big round brass bushing about 5˝ in diameter and 6˝ in length and we were doing that on the Haas vertical mill. Now, we bought a CNC lathe, so we’re making them on that.

“This project has grown from a prototype to fix a problem they had in a spindle assembly and now we just build them all for them. They’ll call us up and order 30 in a month. We get the raw material, throw the program in the lathe, put the material in and punch the button.”

“Since then, we’ve done various other things for other manufacturers in the area,” he says. “We’ve gotten more of those kinds of jobs, but most of what they send us is not production stuff where we’re making 100 of something. It’s usually a prototype item, so they’re willing to pay our going rate. As long as our numbers come in somewhere around what they’re thinking, then we usually get the job because they know from our history with them that we can usually turn it around in a time period that they want. By doing that, every couple of months, in the door they come with some kind of project.”

Pricing and timing were two big obstacles Auto Machine quickly learned it had to overcome in order to stay competitive and win these different machining bids.

“Our biggest problem was we were very used to quoting automotive stuff,” DeBates says. “After 45 years, I can quote an engine, but I had no idea how to quote five of something that I had to build from a block of aluminum or steel. That was the hardest thing. When we first started trying to take on outside machine work, we were losing a lot of the bids. It was really competitive.

“We were very unfamiliar with it at first, so we learned a lot through the guy doing our programming because he had seen it and he knew a lot of these companies. When they’re doing production and making 100,000 of something, it could be a quarter of a penny difference whether you get the bid or lose the bid.

“We also learned that when you’re doing the one-off jobs, you’re still competing with a lot of other shops because all these companies have multiple shops that can do this. We had to actually go out and find out what people were charging to run a particular machine per hour. That’s hard to do because most of these people won’t tell you. I have a few friends in the industry who gave us a ballpark figure per hour on a machine.”

At first, Auto Machine’s prices were high because the shop didn’t want to be too cheap. Then, the shop ended up going too much the other way. Today, they’ve found their sweep spot.

“Now, we’re to the point where a couple of these companies don’t always ask us for a hard and fast number anymore,” he says. “A lot of times they’re more worried about delivery time. With some of these things they give us, we might have five working days to produce one, which means somebody has to work some overtime to get it done or some other projects have to get shoved off to the side. It’s a balancing act.”

Another thing Auto Machine found was it needed people in the shop who knew how to run different CNC programs and operate the machines, regardless of what the part might be.

“You’ve got to break it all down into all these individual little things. We come up with a number of hours that it’s going to take to do it and then we apply our going rate for that machine. Then, you have to decide what kind of profit you want to make on it and add that into it.”

For every job Auto Machine might win, DeBates says they probably lose six or seven. With a good reputation for their automotive work, losing bids wasn’t something the shop was used to.

“That bothered us, because in the automotive industry, we very seldom ever lost a job,” he says. “We would quote it and we’d get it, not based on being the cheapest, but our reputation. It’s not real easy, especially never having been in the field, but if you get a few of these people, it can add quite a bit to your bottom line because it’s not like pricing a bore job on a V8 engine. You can probably make double your labor rate.”

The best part about venturing beyond your typical engine machine work is you can do these other jobs using the machines your shop already has. And finding work that will keep your machines running is what puts extra money in the business.

“When you’ve got idle time on a machine where you’re not making billet blocks, you can do some of this stuff and keep the machine running,” DeBates says. “If the machine isn’t running, it’s not making its payment. Most of the equipment that we use for this work was already in-house from doing billet blocks. We had the machines and we had the people who had the knowledge and the experience to run them. It all started with the one sweeper company. From there it was just one engineer talking to another engineer. We never advertised that we could do work for these other industries.”

Once Auto Machine started to build its reputation for other machine work beyond automotive, the shop got jobs for companies in industries such as medical and robotics, but there are many others that would apply as well.

“We’ve done work for a company that builds very high-end belts for medical equipment,” DeBates says. “Some of them are only like 3˝ in circumference, but they might have 100 teeth on them. We build the molds for those.

“We have another company that builds pipeline inspection robots. They shove a robot inside a pipe and it goes down 1,000 feet and inspects it and pops up somewhere else. The company we’re dealing with makes the rubber track for that robot. Again, we’ve built the mold for that.”

Auto Machine has also done little odds and ends for different companies or different people, such as machining new patterns on Jaguar and vintage car flywheels.

“If they’re willing to pay the price, we’ll go ahead and make it,” he says. “Doing repattern machine work on Jaguar and vintage car flywheels for different pressure plates is really easy to cut a little program, drill and tap the six or eight holes that you need to be true on center and people are happy. It’s an automotive product, but it’s not what everybody’s doing. It’s just an example of how else we can keep that machine busy. If you have these machines, you just have to start thinking, what can I do with it?”

While Auto Machine has done a great job thinking outside the box with some of this work, the shop has also benefitted from strong word of mouth, which most engine and machine shops are quite familiar with.

“It started through word of mouth,” he says. “My advice is to get out there and see what’s in your area. All it takes is getting business from one company and it goes from there. We haven’t turned it into anything super steady, but it’ll add to your bottom line at the end of the month. Try to find something you can do for somebody and do it well and make them happy. If nothing else, you’ll have a reference or they’re going to end up telling somebody.”

Going beyond your comfort zone is never an easy or effortless decision, but with a majority of the know-how, capabilities and machines already in your shop, you don’t have anything to lose by going after this ancillary machine work.

“It is a little scary because it’s totally different from what we’ve done for over 40 years,” DeBates admits. “It was totally outside the box for us, but we’re sure glad we did it. Today, we have three Haas machines and a Rottler F69, which can all do a lot of non-automotive work. There were days where all those machines were just sitting there, not doing a lot. Maybe one of them would be running. I like to open the door up and see four or five green lights down there rather than one that’s flashing red all the time.

“We’re probably doing it all wrong,” he jokes, “but so far it’s worked for us.” EB

Advertisement
In this article:machining, machining equipment