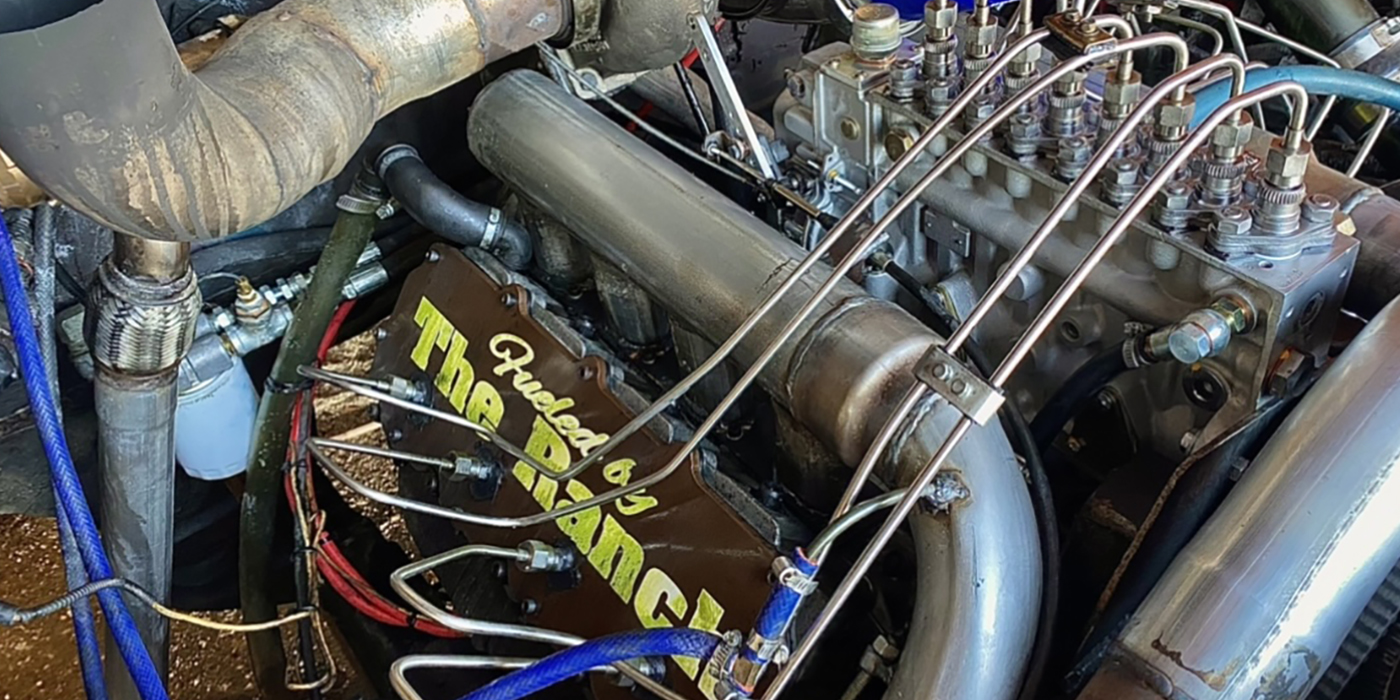 Looking to feed their need for horsepower and truck pulling, Jake Jones and Miles Heberlein built this mechanical-injected 6.0L Powerstroke engine. It’s one of the only known, working mechanical injection systems on a 6.0L. Find out what went into this unique build.

Aside from a means to earn a living, half the reason engine builders do what they do is to push the envelope and create better engines. That’s exactly what Jake Jones and Miles Heberlein recently did with their build of a 2.6 smooth bore, mechanical-injected 6.0L Powerstroke engine. The build gave the duo the opportunity to shine some light on older technology on a newer platform.

Both Jake and Miles became interested in engine building at an early age. Influences from family and an interest in competition grew their desire to become more involved in the diesel world.

“One thing led to another and you end up involved in a pulling truck, a tractor, a semi, and then you end up doing something of your own,” Jake says.

What started out as just friends hanging out, turned into working on trucks and vehicles in their spare time, and today Jake and Miles run a shop called The Ranch in Fennimore, WI.

“We do a lot of work on the 6.0 and 6.4,” Miles says. “The focus of the shop is to provide an excellent repair at a decent price. We don’t have a lot of machinery to machine engines in-house, so we take them to a performance shop called Full Boar in Dodgeville, WI for our machining. For one-off in-house things we have a milling machine, jet lathe and a lot of fabrication equipment.”

According to Jake and Miles, The Ranch is an old farm shop that can fit four trucks at a time. Despite being on the smaller side, the shop is still capable of churning out some impressive diesel work. Case in point, the shop’s recent build of a P-pumped 6.0L Powerstroke for a ‘78 Ford F-250.

“The original system was the brain child of Jeremy Johnson and we’ve taken over the reins and brought it into the next realm,” Jake says. “This engine was a build to help calm down our need for horsepower and pulling. It is the only known, working mechanical injection system on a 6.0L Powerstroke diesel.

“We’re looking to get it out in the public’s eye a little more now that we have a year of running it in the local 2.6 smooth bore sled pulling class. It’s a one-off engine with a mechanical pump pushing more fuel than anyone else can provide with the OEM HEUI (hydraulic electric unit injectors) injection system.”

The F-250’s original engine was pulled when Jake and Miles knew they were going to run the mechanical injection system. Another stock engine was put in to begin testing and dynoing the mechanical system while the original was being built up, which shortly led to a blown-up engine.

“The engine was disassembled, cleaned and inspected, and we found the main line was egged out, but the crankshaft was still straight,” Jake says. “After the block was baked and blasted, the main was bored out 1mm and the block was bored 0.020˝ over. The decks were blueprinted to the crank. The main was honed to accept main studs and coated bearings.

“The crank was then balanced and polished to a mirror finish, and new cam bearings and freeze plugs were installed. A final cleaning and inspection of all the parts was done before we finally reassembled the engine.”

“One of the biggest roadblocks were the injectors,” Jake says. “Fair Valley Performance had to completely rework the internals of the injectors, which are a 6.0-based injector. Everything in them will directly transfer over the HEUI system, which is an added benefit of what we’ve done.”

With unique builds such as this one, Jake and Miles also got some advice and help from Full Boar, J&S Transit, Warren Diesel, and Kill Devil Diesel. For now, the engine is a dedicated 2.6 truck pulling engine in the shop’s ‘78 Ford F-250, but bigger plans lie ahead.

“On our recent dyno session, the engine made 1,196 hp and 1,741 ft.-lbs. of torque,” Jake says. “Once we get the final bugs ironed out, we have full intentions of pushing the platform to its full potential, and we will be offering this as a kit to the 6.0L community with a possibility of doing it to the 6.4L.”