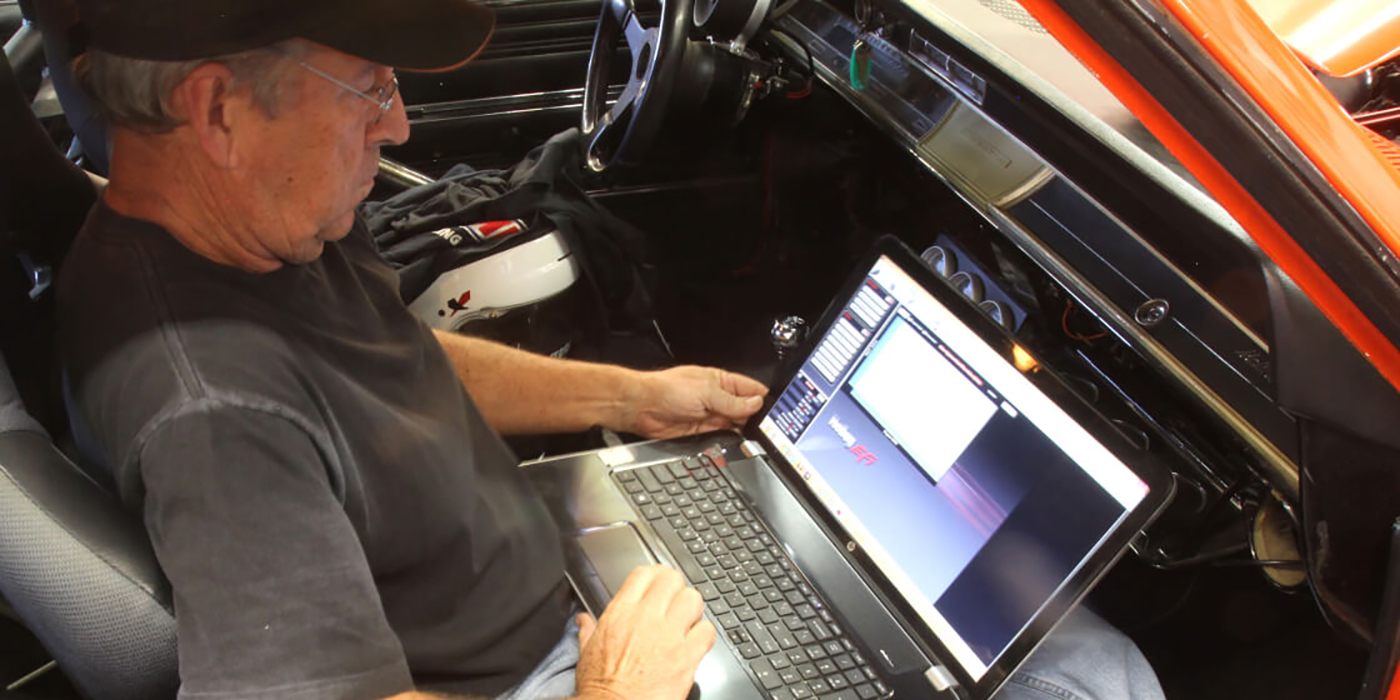 Much of the acceptance of EFI has been due to aftermarket companies making them more user-friendly.

Rewind two decades and the words “EFI” and “Tuning” were seen as some sort of black art that only a handful of top racing teams and engine builders knew how to do. It wasn’t a job for the mainstream engine enthusiast. It required part computer programmer skills and part engine builder know-how. Today, it’s as normal in engine shops across the country as peanut butter and jelly. Much of the acceptance of EFI has been due to aftermarket companies making them more user-friendly.

According to Holley’s Evan Perkins, the company has positioned itself as a one-stop-shop for all things EFI. “We have every part a builder would need to make a complete EFI conversion from complete kits, to individual components that let the builder design the perfect system for the application, to the gauges and data acquisition components to monitor operation.”

When it’s operating in “closed-loop,” EFI regulates the air/fuel ratio by incorporating a wide-band O2 sensor to measure for air density changes. The whole system includes several components such as throttle position sensors, fuel pump, regulated fuel return circuit, electronic injectors, controller, and programmer. The injectors will need to be upgraded to high current power over the low current OEM power supplies for high-horsepower applications. In some high-horsepower applications, fuel pressures need to be regulated from low volume, idle mode to high volume, full power mode. In short, there’s a lot that needs to be anticipated and controlled in an electronic fuel injection system.

Ben Strader of EFI University says that the EFI market has matured today compared to what it was when he started his company 18 years ago. “It started as EFI University because, at that time, engine builders didn’t know anything about EFI. Over that period, the demographic has changed. I have 15, 16 and 17-year-old kids who learned on the internet about plugging in a laptop and tuning, but they’ve never seen a connecting rod or a crankshaft in their life.”

He says now they teach people from both ends of the spectrum, whether you’re a beginner or an expert. EFI University went from taking engine builders used to working on carburetors to converting them to be proficient in the computerized world of EFI. One of the results of computerization is that many younger enthusiasts have a laptop and a Honda and think they’re a tuner. But successful tuners have to use both a hands-on approach and digital know-how.

“The funny part is,” says Strader, “they’re super savvy with connecting to servers and TCP IP settings and so on. I tell a funny story of a guy that was in my class a few years ago. It was a five-day class where we are drawing the four-stroke cycle on the chalkboard at the beginning of the week. By the end of the week, they’re on the dyno with a laptop tuning a car. At the end of all of this, the guy asked me point blank, ‘What’s a flywheel?’ My jaw dropped because I felt like we had failed him.”

Strader says that it isn’t unusual for people to come to his class from other fields who have vastly different skill sets, but he can usually make tuners out of everyone within a week. He says it’s a matter of being open-minded enough to learn. No matter how seasoned you are in building engines, anyone can learn new tricks.

EFI was not well understood in the early days unless you were an engineer. However, Bosch and others continued pursuing EFI because of the fuel savings and emissions regulations. Ironically, EFI can also make a lot of horsepower if you know how to use it properly.

Fast forward to 2021, and people are still struggling with EFI tuning, says Strader. “Whether you like it or not, you’re forced to deal with it as part of doing business now. But there are more manufacturers, especially in racing and performance, trying to simplify the systems. There’s more automation – more icon- or image-based stuff where, in the past, you almost had to have a programming degree to understand how to use it. Now you click on the icon that looks like a fuel injector to adjust fuel parameters, and you click on the one that looks like a spark plug to do timing. Manufacturers have realized that if they make it easy enough, they’ll get more people to embrace it. So you’re seeing a lot of interfaces that are simplified. Some have onboard hardware that can self-correct and self-tune, and the interface is more user-friendly.”

In the past, a piggy-back ECU computer may have run with the stock ECU to add or subtract from the factory tables. But now, many standalones contain the most common engine tunes with built-in base maps, so there’s no need to run the stock ECU unless it’s in parallel to run other systems.

“All of our systems are considered standalone as they don’t require any other ECU input to control the engine,” says Holley’s Perkins. “To make it easy on enthusiasts/builders, we offer plug-and-play harnesses that allow someone to plug a Holley Terminator directly into their LS, Gen V LT, Gen III Hemi, or Coyote engine. Stock ECUs can be a good starting point for many builders, but for a competition vehicle, any Holley ECU is going to be a leg up in terms of features supported by the software, as well as ease of tuning.”

Strader says that most standalone ECUs come with logic-based startup maps where you tell it how big the engine is, and you know what kind of engine it is. “[Manufacturers] have done most of the stuff in the background to get them up and running and started, Strader says. “That was a pretty good strategy from a business standpoint. They purposely made starter systems to get people to use EFI and embrace it. They made it less scary to work with at the beginning.”

Holley’s Perkins echoes Strader’s sentiments, suggesting that the user interface and ease of use are among the primary features of their product line. “Plug-and-play EFI solutions, such as our Terminator and Sniper lines, have been extremely popular for enthusiasts with mainstream engine applications, and those that are making the jump from carburetor to EFI.”

Perkins says their carburetor-replacement EFI systems such as Sniper and Terminator X Stealth were designed with these sorts of builders in mind. “They feature self-tuning capability where engine builders can bolt them in place of a carburetor, answer some basic questions on a handheld touch screen, and the system will create a base calibration. The systems can self-learn and adjust from there. Builders can also download free, easy-to-use software that will give them full control over the tune as they get more comfortable. We also offer a host of tuning resources, and training courses to help builders expand their skillsets to EFI.”

Strader says the upgradability and interchangeability with EFI manufacturers is very simple. “You might start with a handheld three-inch touchscreen that most everything is done for you, but if you want to mess around with the turbo, you’ll need something more. You can change the software and hook it up to your laptop. Now you can do more advanced tuning without changing out all the hardware or throwing away your old ECU and buying a new one. The upgrade path is a lot more straightforward.”

Using a scalable EFI means you can allow the software to “learn” the voltage of the sensor it is reading and create a scaled range the ECU will interpret the signal from, notes Perkins. He says this is useful for TPS sensors, temperature/pressure sensors, and plenty of other items. There are also a host of inputs for ignition and other parameters required for engine control. This makes the systems incredibly universal.

While familiarity may breed contentment, Strader points out that what matters more than the ECU brand is the guy behind the laptop. “A good tuner can make the ECU work with any brand and get a good result. That’s the philosophy of our school. I’m not going to teach you how to do it with only brand X, because then you’ll only know how to do it that brand. If we teach you what the engine wants and how the ECU functions, you’ll be able to use any brand. The biggest obstacle for tuners is often not being very familiar with how to make the software work. So the companies that spend the most time either making it simple or training their users end up doing the best.”

Tuning high-horsepower race engines is not inherently more difficult, but it is less forgiving of mistakes. For this reason, Strader says they use low-horsepower engines/vehicles for learning purposes. For example, Strader says that it is more challenging to tune with pump gas because of all the supply variation. “You know what you’re getting with race gas, which allows you to miss the tune-up a little bit. It’ll be more forgiving if the weather changes while you’re at the track and you don’t notice. The car might not perform to its maximum capability, but it’s probably not going to damage itself either.”

According to Perkins, running different fuels is more a function of that fuel’s specific stoichiometric ratio and creating a calibration that keeps the engine in the desired air-fuel ratio at all loads. When boost gets into the mix, things like selecting the appropriate MAP (Manifold Absolute Pressure) sensor that can read the desired boost pressure the engine will see in operation become important. The differences in tuning strategy for naturally aspirated and forced induction engines primarily comes down to unique fuel and ignition timing table requirements for each, and also creating a boost control strategy if the ECU is tasked with managing boost level, such as on a turbocharged application with solenoid activated wastegates.

Perkins adds that variable valve timing (VVT) strategies can also be controlled with a standalone. “Our engineers have developed simple tables built into Holley EFI software that allows tuners to manipulate camshaft advance/retard on VVT equipped engines. VVT can offer many benefits to bolstering torque and horsepower across the engine’s rev range. However, the argument for disabling such systems comes into relevancy when camshafts with higher lift and longer duration or pistons with higher compression ratios come into play. The goal is always to prevent valve to piston contact and in some of these situations, limiting the VVT range, or disabling it entirely, becomes necessary.

In addition to fueling and ignition timing, many EFI systems can run many other things such as boost control, nitrous, cooling fans, provide data logging, and with programable inputs/outputs accomplish a myriad of other functions. Systems from Holley and others can also control drive-by-wire throttle bodies, late-model transmissions and more. The sky is the limit, and fuel and ignition control is just the tip of the iceberg with EFI. EB