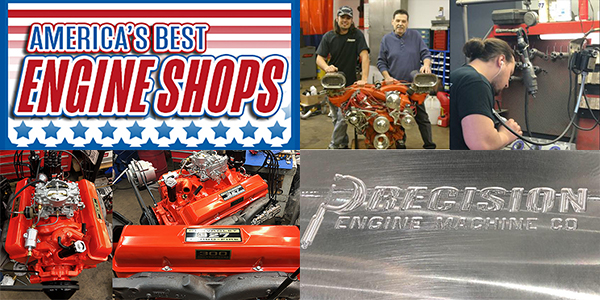 Are you one of America’s Best Engine Shops? If so, see how you might stack up against Precision Engine Machine Co. located in Hyattsville, MD. They have entered the Vintage category.

Are you one of America’s Best Engine Shops? If so, see how you might stack up against Precision Engine Machine Co. located in Hyattsville, MD. They have entered the Vintage category.

Thanks to spending his youth hanging around his uncles, Jan Norris grew up in machine shops. And if you ask him, he hasn’t worked a day in his life. Building engines is what he loves to do. Now 69 years young, Jan has owned Precision Engine Machine Co. in Hyattsville, MD since 1979 and builds all sorts of engines along with his son Michael, 49, grandson Branden, 26, and three other employees.

“I have no intentions of retiring until I fall over dead in front of one of these engines,” Jan Norris says. “However, what I am trying to do is transition Michael into running the entire shop. He’s bringing us up into the modern day.”

Precision Engine Machine Co. was founded in 1967 by Bill Ford and Dick Burgess. Jan joined the team as a machinist and bought the shop from Bill and Dick in ‘79. When the shop started in the ‘60s, it was partially funded by Bruce Wheeler, a local businessman and owner of a Top Fuel Dragster named the Wheeler Dealer. The shop built the engine for the dragster, which ended up going to the nationals and finishing runner-up in the finals to ‘Big Daddy’ Don Garlits.

“We got a lot of recognition from that because we were a no name outfit in Hyattsville, MD and had made it to the finals,” Jan says. “So we got a lot of work, and after that we got Lee Edwards and Gene Altizer – all those early racers would come to us with their stuff.

“Then, towards the end of the ‘70s into the ‘80s, I took us into the NASCAR stuff. We did that for a long time. We also did offshore boat racing, tractor pulling, Corvettes and Ferraris for 24-hour racing – I guess over the years I’ve done a little bit of everything.”

In ’95, Jan was doing a lot of NASCAR engine work and suffered a heart attack that year. He recovered, but doctors told him he needed to crank it back a bit.

“After that, I moved to the building we’re in now and told my son Michael and grandson Branden that I was only going to do whatever walked in the door,” he says. “If it comes in the door, I build it.”

Today, the machine shop will take on street rod motors, performance engines, tractor pulling engines and marine engines – since the shop is located within spitting distance of the Chesapeake Bay – and specializes in vintage engine work as well.

As a full machine shop with the capability of doing all work in-house, Precision Engine Machine has the ability to work on any engine that crosses the shop’s path. Last year, Precision Engine Machine had a customer come to them wanting to rebuild a 327 cid Corvette engine. The rebuild fell on the shoulders of Michael Norris, but it turned out to be more than a ‘simple’ rebuild. The customer wanted a numbers matching 327 Corvette engine for a ’63 split window coupe Corvette that met the National Corvette Restorer’s Society (NCRS) guidelines.

“Our customer was doing a frame-off restoration and he wanted everything absolutely numbers matching for the engine build,” Michael says. “Every date code and casting number has to be correct. The color of every external piece has to match the factory. Every bolt head has special markings. Even the spark plug wires have a date on them.”

Norris had to hunt down every single part he could find because most of the engine came to the shop in a basket. However, for a guy who’s been in an engine shop since the age of 4, this engine build was a fun, new challenge.

“The hardest part was doing all the research and finding the parts, but that was also the most fun part,” he says. “I’ve built I don’t know how many Gen 1 small block Chevys over the years, but this was by far the most fun one that I did because I got to learn so much about how the factory built these things back in ‘63 and all the little intricate details it takes to build a NCRS judgeable car.”

On the exterior, the 327 Corvette engine looks completely factory. But on the inside, Precision Engine Machine did use some upgraded, aftermarket parts. Overall, this build cost more than $16,000, mostly because of the cost of sourcing the correct parts.

“The total build time on this was about 18 months and most of that was searching for parts, doing research and figuring out exactly what we needed to get,” Norris says.

You can enter the 2019 America’s Best Engine Shops contest at www.topenginebuilders.com.