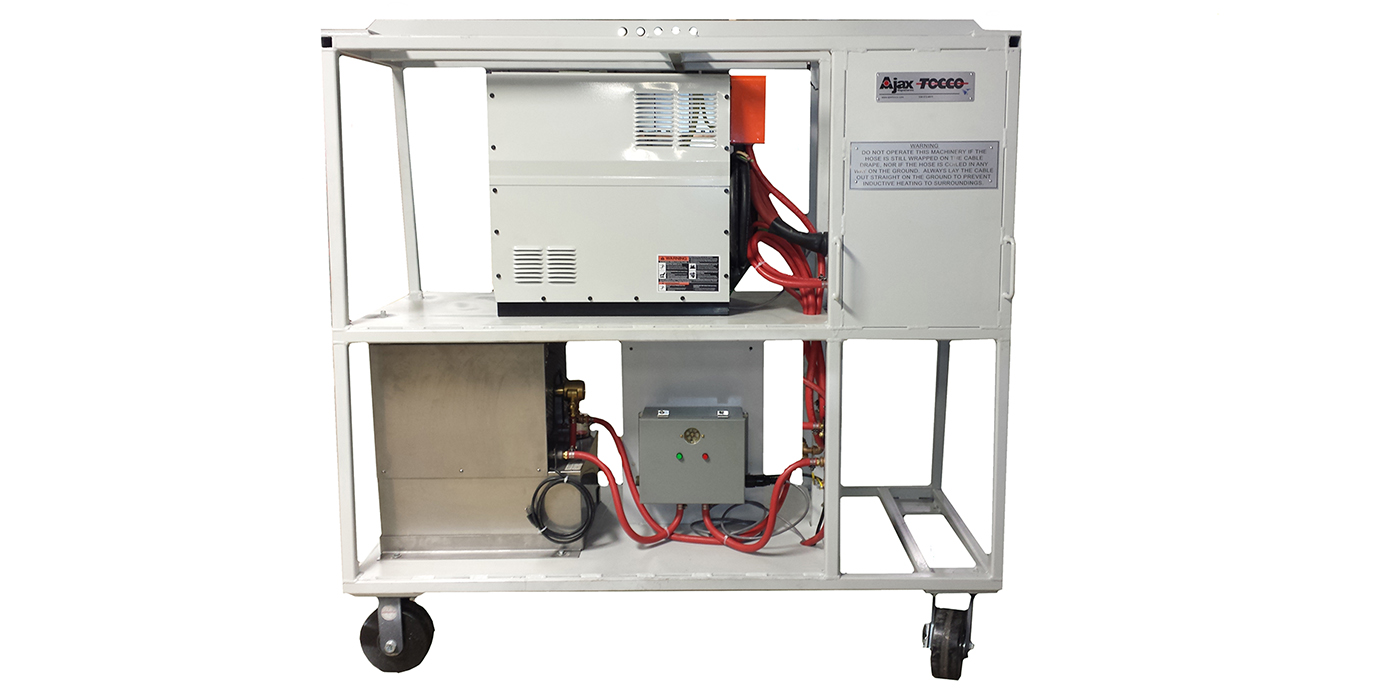 Induction heating should certainly be a primary consideration as a desired heat source for your current or upcoming reman heating operations.

Induction heating technology has been commercialized for over 100 years yet is still considered “new technology” to those unfamiliar with its application. Despite being a proven and mature thermal technology, a certain amount of “mystery or art” still exists in the application of this applied science.

Induction is most often utilized for melting, forging, and precision heat treating applications. Additionally, induction heating is extensively used for various metal joining techniques such as brazing, soldering, shrink fitting, and adhesive bonding. The majority of induction heating systems are sold to OEM automotive and off-road engine manufacturers for the purpose of fabricating and extending the life on new engine and drivetrain components.

In the past decade, induction heating has consistently been a beneficial technology for drivetrain remanufacturing operations and is continuing to gain popularity within this industry on a global scale. Sales and demand continue to increase the need of using induction heating systems for conducting a variety of drivetrain remanufacturing applications. These components consist of, but are not limited to: cylinder heads, connecting rods, transmissions, differentials, gears, bearings, pulleys, ring gears, flywheels, and more.

The information provided in this paper is intended to illustrate a better understanding of induction heating technology, the advantages it creates through its endless capabilities and versatility, along with its proven track record of yielding a high ROI. Some of these benefits include increased core retention, reduction of scrap, expanded production, reduced labor content, diminished energy consumption, decrease of consumables, improved employee safety, and ergonomics.

The theory of induced electrical currents via electromagnetic induction was proven by Michael Faraday in 1831. The technology was first commercialized for industrial heating applications by Dr. Edwin Finch Northrup in 1918.

Induction heating is a thermal process in which an electrically conductive material is placed within a varying magnetic field and is heated via hysteresis (magnetic materials only) and/or induced electrical current (all conductive materials). The changing magnetic field is generated by a high-frequency alternating current (AC) being passed through an electrical winding (coil/inductor). Induction heating is a non-contact heating method that is extremely fast and efficient when compared to other heating technologies for remanufacturing. Energy conversion efficiency can be as high as 90%. Heat times are measured in seconds without combustion or physical contact with the part being heated.

The multiple induction heating system parameters are influenced by the many variables of the manufacturing process, such as component alloy, component dimensions, allowed heating time, target temperature, max temperature, and material handling constraints. It is recommended that a potential application for induction heating be reviewed by process engineer in order to guarantee a successful, reliable, and repeatable process.

Many envision a heating inductor as a simple helical winding made from copper tubing that would surround the part to be heated. Although this would be one

form of an inductor, there are many more to consider. Heating inductors can be made from hollow copper tubing, solid rod, flexible cable, machined billet, and even 3D printed from powdered copper alloys. The design of the inductor is determined by the process requirements ,budget and ability of the user to build inductors. Copper is the chosen material for fabricating inductors due to its high conductivity (low power losses), high thermal conductivity (easily cooled with water) and relatively low cost. Most inductors are water cooled due to reflected heat from the part and extremely high current flowing within the inductor (1000’s of amps are typical).

The inductor is the most important component of an induction heating system. Inductors can be designed in many different configurations such as solenoid, hair pin, pancake, transverse, ID, channel, clamshell, and machined/3D printed profile. Only the solenoid inductor surrounds the part (Figure 1). It is a common misconception that the inductor must completely surround the part. The fact is, an inductor can heat from the outside, inside, one side, two sides, or even 3 sides. Inductors are generally profiled to the shape of the part and/or the area of the part to be heated. The style of the inductor influences efficiency. For example, an internal heating inductor requires approximately two times as much power as solenoid inductor.

The gap between the heated part and the inductor, known as the coupling gap, also influences efficiency. As the coupling gap increases, efficiency decreases. It is important that an inductor design expert be consulted early during the process development phase of your application for the greatest chance of process success.

An inefficient inductor will use excessive power, have poor repeatability, require post working the parts, or may not work at all. The induction heating process is only as good as the inductor being used for the process.

Key design attributes of a quality inductor are as follows:

For example, an Induction Valve Seat Heating inductor is designed and built to very tight machine tool tolerances in order to provide precise alignment and pinpoint heating zones. Thus, limiting the heat to only the valve seat area (Figure 2a), preventing heat damage to the parent bore of the valve seat pocket. As with the majority of inductors, these are water-cooled and equipped with specific alignment and spacing features to take the guess work out of the process and simplify the procedure for the operators.

This style of inductor (Figure 2b) is equipped with a quick-change feature that supports different inductor geometries and can be swapped out in seconds based on the make and model of the head being processed. The durability of this design, along with the heat resistant materials, allow for thousands of seats to be heated with a single Induction Valve Seat Heating inductor.

Not only is induction heating very controllable and repeatable, it is also very predictable.

It is easy to see that induction heating offers many superior attributes over other heating methods, including precision, speed, control, and energy efficiency. However, induction is just one portion of the heating process. Despite the superior heat control afforded by electromagnetic induction, it will only be as accurate and repeatable as the ability to control the other variables of each process such as part tolerance, part location, part cleanliness, part material, process consistency, and several other factors.

Induction Heating OEM’s such as Ajax TOCCO Magnethermic Corporation provide customers with Lab trials on their actual production parts. Customers can send parts for all types of induction heating applications and experience the proven results of the induction heating process first-hand.

Benefits of Induction in the REMAN Industry

Some of the distinct advantages of using our induction heating equipment are; Repeatability, Reliability, Quality, Safety, and Speed.

In addition, reman users have been getting a favorable ROI and the majority have been able to justify the costs due to savings in labor, safety, efficiency, and even medical insurance cost reductions.

Why Choose Induction Heating for your REMAN Applications?

Induction heating does not burn traditional fossil fuels. It is a clean, non-polluting process, however it seems that induction being green has been the biggest little secret over the last 100 years. Induction has always been a “green technology”.

This uniquely energy-efficient process converts up to 90% of the energy expanded into useful heat, compared to batch furnaces which are generally only 45% energy-efficient. Since induction requires no warm-up or cool-down cycle, stand-by heat losses are reduced to a bare minimum. The repeatability and consistency of the induction process make it highly compatible with energy-efficient automated systems.

One of the more prominent industries that exemplifies going green, is the Remanufacturing Industry. Paraphrasing from the RIC (Remanufacturing Industries Council), Reman is taking a formerly sold, worn or non-functional product or component and returning it to a “like-new” or “better-than-new” condition and warranting its performance level and quality.

Very similar to the induction heating community, the remanufacturing industry also shares a close- knit group of organizations and associations around the globe.

Also resembling induction technology, are some of the major benefits of remanufacturing, which include conserving materials, reducing energy consumption during manufacturing, mitigating waste, and getting a higher ROI by having a lower price point for equivalent quality items.

Induction heating technology has already been proven to be successful for many applications in the Remanufacturing Industry. A sample of these innovative heating applications include:

One of the most popular reman applications is induction heating for valve seat removal. Ajax TOCCO Magnethermic offers engineered solutions for this application which is referred to internally as Induction Valve Seat Removal (IVSR). The engineered IVSR systems provided by Ajax TOCCO Magnethermic have revolutionized the heavy-duty engine remanufacturing industry, specifically the task of removing pressed-in valve seats from engine cylinder heads. Ajax TOCCO’s process involves rapidly heating pressed-in valve seats in a matter of seconds. Once the seats cool, they shrink and can be easily removed with some simply modified hand-held tooling (Figure 4). In some instances, seats were able to be removed using only a gloved hand.

Dozens of IVSR systems have been provided to major OEMs along with the leading engine remanufacturing companies around the world.

Seats of all sizes (Figures 5-7) in both ferrous and non-ferrous cylinder heads have successfully been heated, shrunk and extracted using the IVSR process. IVSR Systems are relatively compact, transportable (Figure 8), and adaptable, allowing the process to be conveniently transported to the point of need.

Induction heating is a very controllable, repeatable, and scalable process. Temperature rises of a few degrees to several thousand degrees can be achieved in a matter of seconds or over a specified amount of time depending on the process requirements.

Temperatures not easily reached with torches, resistance, and/or furnaces can be obtained with induction heating technology. Unlike combustion or radiant heating methods, induction heating is not affected by environmental changes such as dewpoint, drafts, ambient temperature, or pressure.

Induction can be very selective, heating only small portion (a few millimeters) of a part or it can heat entire assemblies in single piece part flow or continuous conveyor type production.

Induction is extremely adaptable in heating a wide variety of part geometries.

The energy efficiency of induction is attainable up to 90%. The heat is instant on and instant off, therefore not wasting any power during standby or delays in production.

The benefits of using induction heating technology in the Remanufacturing industry are limitless. Interested parties are encouraged to continuously look for new potential applications. Replace the “blue wrench” (torch) with an induction heating system to improve your bottom line.

Induction heating systems are mobile and adaptable for various types of applications by just simply changing out the tooling in a very short time. Induction heating should certainly be a primary consideration as a desired heat source for your current or upcoming Reman heating operations.