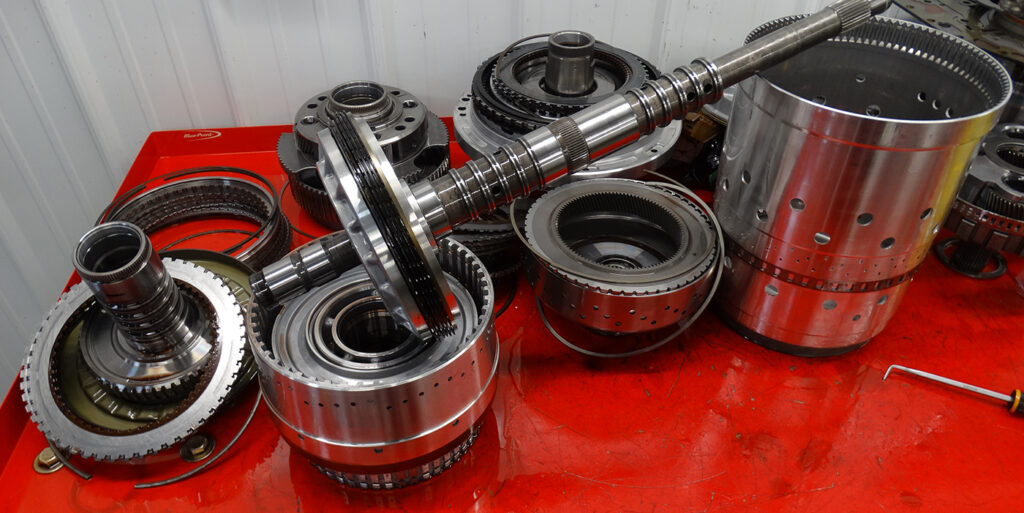 The following statement isn’t a trade secret, it’s a fact. If you don’t have a solid transmission, you can’t put power to the ground. This is especially true with diesel trucks where torque output is at or near 1,000 lb.-ft. stock, and over 1,200 lb.-ft. with simply a tune upgrade!

At LinCo Diesel Performance, we tell our customers that a built trans is the foundation of any diesel build and should be the next step after a tune on most late-model diesels. A built trans is necessary before any number of upgrades. Thinking of a turbo or injector upgrade for example? These are jobs that could cause you to actually lose the power you just added due to slipping clutches and an inefficient torque converter.

Granted, certain models can “hold” more power than others, but all stock autos will slip and lose power around 550 rwhp with aggressive tuning. Common, basic upgrades include increased line pressure and/or lock-up pressure, performance clutches with added count (in many applications), and a triple-disc torque converter.

Often times, a billet stator will be used, not only for a stronger part, but also to select the stall speed to match the turbo set up. Once the turbo is swapped out for a larger unit and paired with larger than stock injectors, hard parts such as shafts, hubs, planetary gear sets, and even cases are stressed beyond their limits and need upgrading. Let’s take a look at the common slush boxes used in light-duty diesel applications.

The Allison A1000 was used behind GM Duramax engines from 2001-‘19 and is regarded as the most robust all-around transmission from the factory. While the Allison can live a long life at stock power levels, they have their limits. The early 5-speed models found in 2001-‘05 trucks will often fail below 500 hp with aggressive tuning and/or driving. With a few hydraulic modifications and a good set of clutches, these units will handle the same power as the newer 6-speeds. Hard parts are good to around 650 hp depending on the usage of the truck.

Above 650 hp, the C2 clutch hub is the weakest link. Coupling the input shaft to the P2 planetary indirect drive and overdrive, the C2 hub sees all the torque output these engines have. The 3-4 up shift is also hard on this little guy, but can be tamed down via tuning as well as hydraulic modifications. Several companies offer billet C2 hubs.

Next is the male splines on the P1 planet. Known to twist and eventually break, the planet is often modified to accept stronger billet splines or replaced as a whole billet carrier. Output shafts are smaller on ‘01-‘10 models and have been know to break over 650 hp in sled pulling applications or hard launches on pavement. Input shafts have been known to handle over 800 hp, but a high torque set up or frequent boosted launches will quickly test the limit!

Also, high line pressure and/or aggressive lock up will break an input shaft. Competition Allisons and high output street builds over 1,000 rwhp usually get treated to all-billet shafts and a P1 planetary. These units can handle over 1,500 hp for several years/seasons.

Changing gears from the Allisons, Dodge auto transmissions have a reputation for being weak and failure prone. Although this is true in stock form, the 48RE found in 2003-‘07 5.9L trucks is arguably the best trans for high performance diesel applications. Often swapped into all different types of diesel builds and other swaps, these units are simple, shift very fast and can be built to handle crazy power thanks to a slew of aftermarket hard parts.

Based on the 727 TorqueFlite from the ‘60s, 47/48RE units are hydraulically controlled and can be operated with no electronics besides a simple toggle switch to control o/d and lock up functions, making them a great candidate for conversions and swaps. The hydraulic operation means no need for “trans tuning” via a control module. The shift points, firmness and timing can be adjusted mechanically with use of different springs, lever ratios, shims, etc. If you choose to retain electronic function, these units can be easily tuned to operate off of an ECM or standalone controller as well, keeping them simple to tune/adjust.

The basic upgrades begin with upgraded performance clutches with added clutch count and an upgraded forward band coupled with increased line pressure and hydraulic mods. As far as hard parts go, the power level of the 47/48 will determine which parts need upgrading. The first part to be swapped with a billet piece is the forward band strut, anchor and/or lever as well as servo/accumulator pistons.

Next, and very common, is the input shaft. There are at least four different sizes and variants of upgraded billet inputs for these transmissions. The power level and abuse level will determine which size/type you need. Next up would be the output shaft, which can be upgraded to a stock-size billet piece or swapped out for an oversized shaft, which will require the transfer case input gear to be swapped out to match on 4×4 models. Above 550-650 hp levels, pistons, drums, clutch retainers, and other hard parts will be upgraded to billet. Competition units have been known to reliably handle well over 2,000 rwhp! The 47/48 platform is a favorite of drag racers, diesel hot rodders, conversion builds, and those enthusiasts looking for a strong and simple transmission.

The 68RFE trans found in 2007.5 and newer Dodge/Ram Cummins-powered trucks is a completely different animal. Plagued with many common failures, design flaws and short comings, these units keep us trans builders in business! The 68RFE platform has come leaps and bounds over the last several years and is still moving in the right direction. The answer for a 68RFE needing to hold 650+ hp used to be a 48 swap, or even Allison swap for those still wanting more than four gears.

Thanks to the aftermarket, times have now changed and the 68RFE can reliably hold up to 750+ hp and has been pushed to over 1,400 rwhp! Some of the main uses with 68s are failure-prone solenoid packs, which control every shift and even line pressure, o/d clutches due to a poor design drum, and valve body and pump wear/failure caused by thin weak castings among other issues. These units also have plastic accumulator pistons, which crack with added line pressure and a weak L/R sprag has been the demise of many 68s.

Fortunately, there are fixes for all these issues now, making these units reliable, even with added torque. The first upgrades for even a stock or lightly modded 68RFE truck are performance clutches with added o/d clutch count or an aftermarket drum, upgraded L/R sprag, billet accumulator pistons, increased line pressure, and often times a new pump. The aftermarket o/d drum is a must-have for any build making over 500 rwhp.

Next is a billet input shaft as the factory shaft fails with a triple disc converter and aggressive lock up. These 68RFEs have a weak geartrain and will see upgrades on several hubs and shafts when 750+ hp is on tap. A well-built 68RFE with good tuning is reliable, fun to drive and capable of towing heavy.

Moving on from Dodge to Ford and GM, the Ford 6R140, 10R140 and the GM 10L1000 all share the same principal and design, and are common place in today’s late-model Ford and GM diesel trucks. The units use the Lepelletier-style geartrain system, which is extremely robust making these the strongest units available.

Although the strongest in stock form, the clutch-to-clutch, full solenoid control makes for slow shifting along with complex electronics. Due to the clutch-to-clutch operation and lack of hydraulic components these units do not hold up well to fast shifting under power. Essentially these are great for daily driving and towing, but not for racing and abuse.

There are many good aftermarket parts available for the 6R, however development of the 10R/L platforms have been slowed down due to the pandemic. Common upgrades to the 6R140 is upgraded clutches with increased clutch count, especially in the direct and o/d(E) clutch packs, along with increased line pressure via hydraulic means or in a TCM tune. A billet input shaft is the only hard part in need of replacement, but not until 750+ hp. Again, these units are robust and great for towing, but not ideal for high-horsepower builds looking for reliability when seeing frequent abuse.

A well-built automatic will hold up to the power it is built for and out shift a manual every time. When built accordingly, maintained properly and driven with some sense, you can expect years and many miles of trouble-free operation out of your old slush box.

Another important aspect for a balanced build and proper performance is an efficient torque converter with a stall that matches the turbo set up. Take the advice of experienced trans builders when it comes to torque converter selection for your build – it can make or break your set up. EB